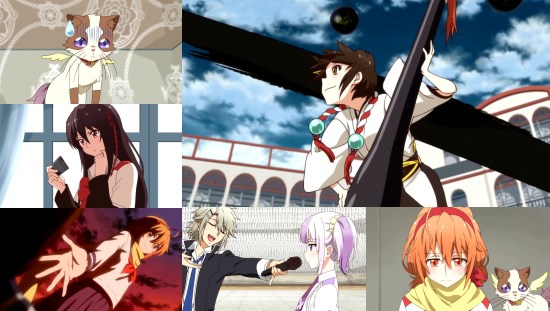 Based on a series of light novels by Last Note, which in turn were inspired by Vocaloid songs written by the same author, Mikagura School Suite's convoluted origins mask a deceptively simple premise: school clubs jockeying for position via a series of showy battles that employ the tools of their trade as weapons (Kill La Kill, anyone?)

Our protagonist Eruna Ichinomiya is a vapid motormouth that steamrolls through daily life - when she's not talking at a million-words-a-minute, she's drooling over girls. Number one on her wishlist? The svelte Seisa Mikagura; granddaughter of the school’s principle. Indeed, it's seeing a glossy snapshot of Seisa in the prospectus pamphlet for Mikagura Private Academy that inspires Eruna to enroll at the school in the first place.

What follows is a kitchen-sink style approach of chucking together a host of zany characters into a series of inane low-stakes school dilemmas that invariably ends in a duel or two. Each school club is headed up by a representative - the Calligraphy club rep waving around a giant brush, the Art club rep sporting a paint palette... the Astronomy club rep? A giant telescope that shoots laser beams, of course.

In many ways, it’s hard to believe Mikagura School Suite came out in 2015 - the show’s wacky school hijinks feel like they belong to a more innocent age, recalling the breezy, carefree feel of Negima or Ouran High School Host Club. The retro feel extends all the way to a furry, talking-critter sidekick and a weirdly off-taste joke about special needs. For all it purports to be a comedy, almost all the show’s jokes fall flat - but come so relentlessly it's hard not to get swept up by the mindless stupidity of it all.

Much like other battle-comedy series such as Sekirei and Infinite Stratos, there's something about how seriously the show takes its own silliness that really starts to grow on you. While the characters receive little lasting emotional development, their concepts remain refreshingly dorky - from Eruna's incestuously inclined cousin to the Francophile goth-loli loner and the big-titted Russian cat-girl wannabe that round out the show’s ensemble cast. Everyone is a larger than life drama school type, clamouring for attention in a series where everyone seems convinced they’re the most important character. All this is helped along by some attractive character art that goes a long way toward papering over some of the more glaring holes in personality development.

Indeed, the show’s visuals as a whole are one of its strongest assets. Opting for a bright, colourful feel, there's a bold superflat aesthetic at work here - dipping into quirks like blank outlines for anonymous background characters that recalls work from Shaft and Brain's Base.

Then there's the fight scenes, which explode into life with a loose, fluid style that'll have sakuga nuts frothing at the mouth. Quite apart from the relatively static animation most of the show adopts, the fights feel more like something straight out of last season’s Flip Flappers. Sadly though, these moments are confined to a couple of instances in the early episodes - later fights are either cut short or treated in a far more bare-bones manner.

For the show’s physical release, your appreciation of the English dub present on-disc will depend largely on your mileage for Monica Rial’s take on Eruna - but for the most part the dub is a good match for the bumbling enthusiasm of the original Japanese, as well as the show’s overall goofball style. The bright visual aesthetic is also a smart fit for the Blu-ray treatment.

There's an awful lot that's charming about Mikagura School Suite, not least its use of a spunky, perverted female lead in a role we've seen occupied countless times by samey, milquetoast males. But despite this, the lack of any semblance of a decent plot or emotional resonance sink any chances the show might have had at real staying power.

Despite all of Eruna’s lustful yuri fantasies about her classmates, they remain exactly that - fantasies; she never takes action on these urges to initiate any semblance of a romantic relationship in real life. There’s an overwhelmingly plastic feel to both the show and its characters - superficially attractive and likeable, yet cheap and hollow on the inside. We might enjoy spending time with this bunch of dimwitted losers, but we’re never prompted to actually care for them in any lasting, meaningful manner. In the end, we’re left with a veritable soda-pop of a show; fizzing with cheap sugary pleasure, but all too quickly drunk dry and tossed in with the recycling.

English 5.1 and Japanese stereo audio with English subtitles. Extras consist of a spread of textless opening and closing songs, trailers, promo videos, TV spots and a US cast commentary for episode 10.