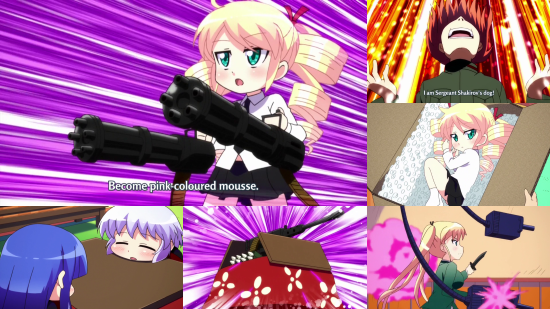 I would have never thought that Tom Hanks film The Terminal would ever reappear in the medi, but aspects of it have, in references to the fictional and defunct country of Khrakosia, whose government has sent a pair of armament-crazed lunatics to defend Souhei, a young Japanese teen.

So, the poor guy finds himself with a pair of chibi soldiers living with him and they proceed to dismantle - with a level of military brutality that Islamic State might be proud of - his life and his home, killing him many times in the process.

But the fun doesn’t stop there. What is the point in having an army without foes? The “peace” is shattered when more foreigners arrive, laying waste to Souhei’s house and life through the power of armoured tables, high explosives and panties.

There's more though, involving a race to school involving Russian and German World War II tanks, fun with a dog leash and I think something involving a burly man, military pornography and chest hair. There was a fair amount of Japanese rope bondage thrown in the general direction of a girl with large breasts, just to add a bit of seriousness into the mix.

All of the above occurs over a total runtime of 18 minutes across the first six short episodes of Military and, as you can probably imagine, the show isn’t exactly serious. Each episode is followed by a five second rundown of a piece of military hardware used during the previous episode - good for your non-serious gun-nut, though it doesn’t exactly take a genius to know that the AK-47 was a popular weapon due to its simplicity, hitting power and that its weakness was its accuracy. Everyone knows that! The series is a comedy, highlighting the futility of armed conflict punctuated with stupid nonsensical dialogue, panty shots and more chibi female soldiers than you can toss at a dartboard (not that I condone chibi tossing in any way shape or form, I was just enjoying the metaphor).

Normally, I appreciate short, episodic anime, having enjoyed the many daily shorts of one of my historically favourite shows last year. Shorts can be enjoyed anywhere, and in this case is probably best enjoyed in my library, or as most guests refer to it my toilet. However, Military is not worth the short period of time that I spent watching it. Instead of watching this, I could have been improving my score on Threes, or maybe burning through a few more pages of a book. Okay, I did get a laugh or two, but that’s only at the sheer slapstick of having two tables with large tank cannons fighting each other. That was funny. But as for the rest... nope.

I am not going to comment much on the animation quality or the acting as this is a short episodic series, and thus I don’t expect much - it is poor, but in keeping with everything else.

Perhaps my expectations were too high here. I wanted something that would put a smile on my face, and Military failed. I wanted some hilarious situations with weapons, and I got them, but I had seen most of them before. But hey, it helped pass time on the toilet...

3
If this series was a military force, it would have lost the war.