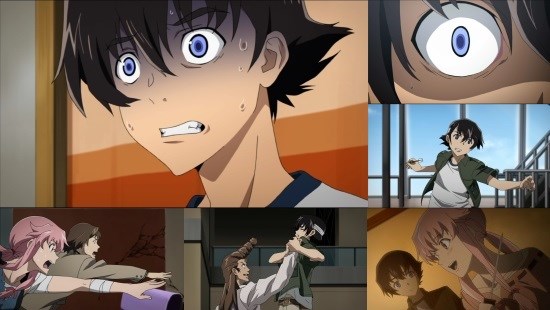 The survival game continues as Yukiteru Amano and his incredibly clingy and emotionally unstable girlfriend Yuno Gasai battle against other diary users in order to become the new god of the universe. Even with a device that lets him see the future, there are things in store for Yukiteru which will make him question his own beliefs and relationships, and also consider the lengths he'll go to in order to come out on top in the survival game.

Whilst the first half of Future Diary presented itself as a dark and edgy action series that dabbled in moments of humour and the ridiculous from time to time, the second half of the series now focuses on being far more serious in its approach to the survival game at hand. As a result, the comedy elements have mostly been relegated to joke sections at the end of each episode featuring Murmur interacting with several of the cast members to provide a bit more context for some scenes and to fill in a bit of back story. With a far more serious approach in the actual narrative, this leads the way towards far more gory shock moments and action scenes. The series also explores some morally grey areas, with characters doing very cruel and calculating things to achieve their goals.

This theme is handled by every character in equal measure as they contemplate the killing that they participate in and whether it's really necessary in order to achieve their goals. This also ties into Yukiteru's character development as he takes a more active role in the second half rather than mainly relying on Yuno to handle all the dirty work. Another component of his character development is his growing relationship with Yuno herself. At first Yukiteru sees Yuno as a character he can use to his advantage as he pretends to be her boyfriend out of fear. As the show progresses we see Yukiteru develop feelings for her which in turn tie into the actions that he takes in order to get through the survival game. The main catalyst of his changing feelings is his encounter with the seventh diary user, as well as his own family situation. While Yukiteru does go through some development here he still retains many of the weaknesses and shortcomings he previously had, although now he seems to work through them out of sheer necessity.

Like the first half of the series, the second half delves into dark themes - murder, torture, child neglect, terrorism and even rape. Some of these scenes are really difficult to watch at times which in turn goes with the more serious tone that the second half has aimed for. Things have also gotten more violent, with a lot of action scenes involving dismemberment and decapitation - things can get really intense which also fits the more serious tone. While the show may handle the survival game more seriously as a whole, its climax and the proceeding run up to this event are, frankly, completely ridiculous. Since it is the finale and the prize is becoming the world's god, the series needs a finale to match. While some of this climax comes out of left field it really captures the more fun aspects of the show that the first half revelled in, but that said this ending leads to a rather anticlimactic and disappointing resolution that doesn't really feel like things have truly been resolved. This may leave some viewers feeling a bit underwhelmed that the outcome presented is what the series chose to end with - it's not the worst ending to a show but it's not really something to praise either.

With regards to the series presentation there are two main talking points to go over: The dub produced by Funimation and the subtitling offered by Kazé. As per part one, subtitling issues are present where on-screen text will not be fully translated if you choose to watch the show in Japanese with English subtitles. This is a rather prevalent problem since the show features a lot of characters checking their phones for updated messages, even more so than they did in the first half of the series. In order to get more on-screen text translated the English dub is the more viable option. However some of this text is only briefly displayed in scenes so if you blink you'll miss it.

With regards to Funimation's dub, it remains rather decent. Each character gives a good performance and the English dub cast seem to have gotten into their characters more. The main point of contention however is the writing, specifically how Funimation like to throw in memes and outdated references in conversations where there is no discernible need for it. Some prime examples are lines of dialogue including such gems as “do not want”, “come at me bro” and “who watches the watchmen”. Some of them fit characters in a weird sort of way, whilst others seem rather superfluous.

While these are issues that can't be avoided, the overall quality of the show is still enough to present an interesting and gripping show that is filled with enough twists and turns to keep the viewer's attention. Whilst the ending may be slightly underwhelming and the set itself has a few issues, Future Diary is still a rather entertaining series that fans of action thrillers with a supernatural edge to them will love.

7
A dark and serious action-packed second half to the series that leads into an underwhelming finale.