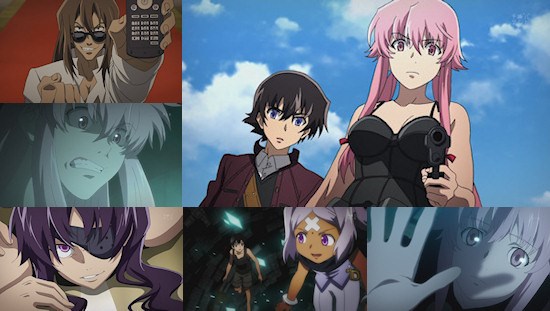 If we had to make a quick, snappy tagline for Mirai Nikki, it would probably be "Insanity has never been this much fun" - everything about the series up to its halfway mark has bordered on or driven well beyond the ludicrous, yet despite revelling in madness and depicting a whole string of ridiculous and unbelievable events it's still an incredibly fun and compelling series to watch that "just works" at a fundamental level.

If you're expecting the second half of the series to sober up and take a more reflective look at its characters and relationships as Deus Ex Machina's power fades and the potentially apocalyptic result of this looms over the horizon, then think again.  Sure, we get occasional pauses for thought to look into the backstory or explore the inclinations of particular characters, but these moments are the exception rather than the rule in the midst of a brutal survival game that becomes as complex as it does bloody with the fight to become the new ruler of time and space itself reaching its peak.

I'm sure it isn't too much of a spoiler to mention that it's Yukiteru and Yuno that we follow closely through the second half of the series, and it's the latter that becomes the real focus of events as the mysteries surrounding her grow before being slowly and carefully revealed.  It's Yuno's story which perhaps lifts the lid on the real genius of Mirai Nikki - it's succeeded in creating a developing a world where absolutely anything goes, and it's not afraid to use that potential to up the stakes in ways which stretch the show's credulity to breaking point but never beyond.  Even as you find yourself shouting "What the-" (quite possibly laced with expletives) at the screen, your brain's mental processing always manages to look back on what has come before and conclude "actually, I guess that makes sense" to keep you tightly ensconced within its world with little danger of allowing you to break out into reality mid-episode.

This brings us to the only real negative of the series - the ending.  Having wantonly laid waste to whatever it tickles its fancy, the climax to Mirai Nikki is a surprisingly saccharine affair for the most part, but worse still it chooses to leave things hanging (with what seems to be promise of a future project to continue things from where it leaves off) in a decidedly unsatisfactory manner.  It isn't a terrible ending, admittedly, but it doesn't really give the viewer much of a pay-off when offset against everything that has come before.

Thankfully, even these weak closing scenes don't serve to undo the overall sense of entertainment offered by the series - it may not be exploring new paradigms in terms of animation quality or highbrow story-telling, but it is more intelligent in its delivery than it first seems, and its that knowing sense of itself as it paints a picture filled with darkness and insanity that stands it in such good stead.  Although Anime on Demand's delivery struggles in terms of subtitling when you're faced with a screen full of mobile phone text entries, it doesn't detract overly from our enjoyment of the series.

Ultimately, and looking at the series as a whole, Mirai Nikki is a fantastic piece of entertainment, pure and simple - it probably doesn't stand up to rigorous deconstruction, but then again it's hardly meant to.  For violent, mind-bending fun, this is pretty much as good as it gets, and we'll be eagerly awaiting a physical release now that the show's broadcast run has ended - I'd wager we aren't the only ones either.

Japanese audio with English subtitles.  Video is available in SD and HD resolutions for paid subscribers.

7
A weak ending detracts slightly from what is otherwise a rip-roaring and hugely entertaining madcap adventure from beginning to end.
LATEST REVIEWS