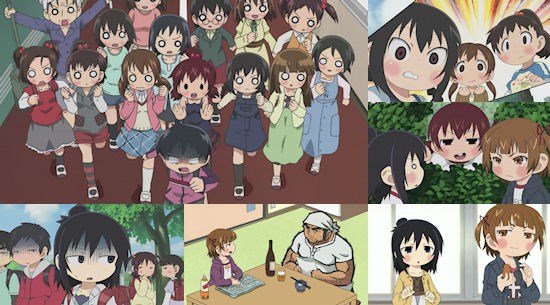 When we took a look at Mitsudomoe's first four episodes back in the summer we have to confess that we weren't all that impressed - the show's low-brow humour soon felt repetitive and often simply wasn't funny enough for us to recommend it.  However, with the series about to begin its second season against a backdrop of a pretty hefty fan base, the time seems ripe for us to check out the rest of the series to see it grew and matured over the course of its broadcast run.

Certainly, there's no real change in the tone of Mitsudomoe as it progresses through the series - while it introduces new characters to its roster, its humour is still largely carried by a litany of misunderstandings between characters, although admittedly some of them are as laugh out loud funny as they are carefully crafted.  That said, with an occasionally depressing inevitability the core of the show's humour remains obsessed with boobs, bras and (in particular for the episodes in question) panties, with effectively the same jokes cropping up time and again.  This can occasionally make for uncomfortable viewing given that the show's core focus is a bunch of middle school kids, and hearing them going on about their obsessions with breasts and sex can feel rather awkward.  Then again, maybe I'm just getting old...

The tragic thing about the repeated use of these more adult themes and sexual humour is that Mitsudomoe is still perfectly capable of delivering good humour and funny jokes without leaning so heavily on such things, as it demonstrates on occasions such as its fun and unique take on the typical school sports festival offering and an entire sketch carried out with aplomb without a single word of dialogue spoken.

Still, if you can get over any concerns about the subject matter and to who it pertains then even we have to concede that is offers up some very funny moments, producing some snappy gags and one-liners together with double-entendres that the Carry On team would be proud of.  Throw in the odd amusing running gag (most notably surrounding the Marui triplet's father) and there's certainly no shortage of entertainment on offer, as the series works hard to shoe-horn as much comedy as it possibly can in each episode.

As per those early episodes, how much you enjoy Mitsudomoe is really entirely dependant on whether you can enjoy and appreciate its vein of humour, and perhaps more importantly whether you can accept the way that it's delivered.  If you enjoy all of the sexual references and the like that the series employs, then there can be little argument that this series refines and polishes its approach throughout to make the most of its humour by delivering it effectively and near-constantly.

As a result, if you are a fan of Mitsudomoe's comedy outlook then you can easily add a couple of additional points to our overall score - for those not impressed or entirely comfortable with its subject matter however, this is a far more mediocre affair as a result.

6
This series improves on its ability to deliver comedy by the episode, but its content and subject matter is still very much a matter of taste.
LATEST REVIEWS