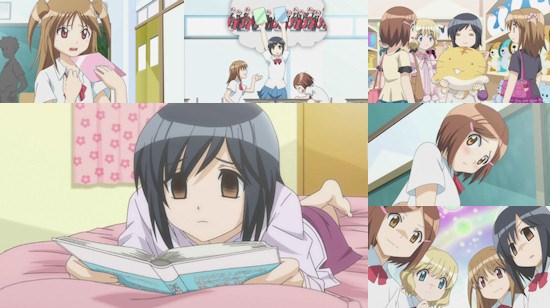 Sometimes there just aren't enough hours in the day for a slice of slice of life anime - enter Morita-san wa Mukuchi, a series of short three minute episodes (two minutes and thirty seconds if you discount the opening credits) that offer some decidedly bite-sized high school shenanigans for your streaming perusal via Crunchyroll.

As the centrepiece of the series we have sixteen year-old Mayu Morita, and as the Japanese title suggests she's rather a quiet girl - indeed, she's effectively mute throughout the series, with our only access to her thought processes coming via some internal monologue on her part.  Despite giving everybody the silent treatment, and perhaps more importantly despite sporting the cold, dead eyes of a serial killer (or a frozen squid, as the series itself would have it), Morita finds herself surrounded by a trio of good friends, from the ever-talkative Miki through to the shy but affable Hana.

From here, and after spending a few episodes introducing these characters, it's all very typical slice of life fare - the girls put up with the summer heat, talk (or not talk in Mayu's case) about boys, eat out, go to festivals and so on and so forth.  Other characters come and go and pop up on occasion throughout the series, but many of them are woefully under-utilised or barely of note at all.

Then again, noteworthiness is not exactly one of Morita-san wa Mukuchi's strong points as a whole - laugh out loud moments are few and far between, and there isn't much room for hilarious dialogue when your main character never says anything beyond some internal monologue when she's agonising over something.  This leads us to the inescapable fact that the series overall is.... well, pretty dull to be honest.  There's a sheen of friendly "niceness" that at least ensures the whole thing remains watchable, and with such short episode times there's no real opportunity to build up anything more grandiose, but this isn't really enough to sustain the show even as a brief animated "snack" of sorts - perhaps it works better in its original manga form, but as an anime outing there's nothing to grab your attention here.

This sense of the ordinary pervades the entire series, with its character designs and animation also proving to be passable but unspectacular with the possible exception of Morita herself who often feels decidedly creepy - when so many other series use the depiction of such "dead" eyes as a visual cue that someone has been hypnotised, possessed or otherwise lost their mind, you can't help but wonder when the killing spree which never actually happens is about to begin.  The only area where this adaptation breaks out of mediocrity is its deployment of a pretty good voice acting cast, even if Hana Kanazawa is wasted somewhat as such a quiet lead character.

Ultimately, if you're happy with a distinct lack of outright comedy and just need a short does of everyday cuteness, then I suppose there are worse places to look than Morita-san wa Mukuchi.  The trouble is, there are also so many better places you can look too - the slice of life genre is hardly poorly-represented these days, and although other series might not boast the short running time of this show that's hardly a good reason to pick it up in its own right.

You can currently watch Morita-san wa Mukuchi in streaming form via Crunchyroll.

5
Its short episode length is the only really noteworthy point of a show that is otherwise a definition of mediocrity.
LATEST REVIEWS