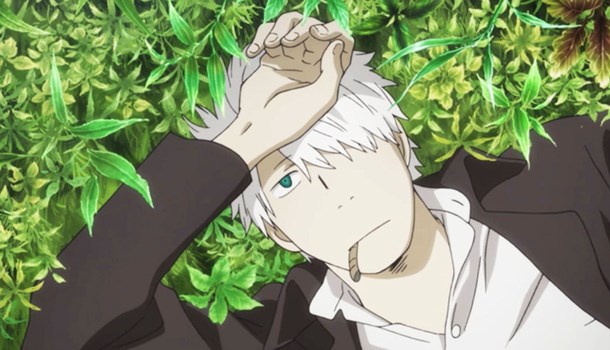 Mushi-Shi follows the exploits of Ginko, a Mushi master. The Mushi are living organisms that exist on another plane, but occasionally interrupt the lives of humans. In most cases this is a bad thing, and therefore Ginko travels Japan helping and studying those afflicted by Mushi.

Each episode plays out like a fable, with Ginko showing great compassion for those he encounters. A gentle man, he never over-reacts but considers the best possible action for both human and Mushi at all times.

In many ways, this series draws comparisons to fan favourite Kino's Journey - the standalone nature of each episode and the gentle morality of each tale is present in each series, but where Kino quickly became quite depressing, Mushi-Shi is, for the most part, spiritually uplifting.

This is due to the direction and the tempo of the series. It never seems rushed. The gentle nature of Mushi-Shi is reflected in both the simple but beautiful style of the animation and in the music accompanying it. The opening track by Ally Kerr (whose style reminds me of personal favourite Kate Rusby) perfectly conveys the sentiment of the series, so much so that here's a link to Youtube containing the opening credits: View Video

If that relaxed, ethereal style appeals, then you're going to adore this series. Not all the episodes end happily, so the tension is still there, but the mix of ideas and the power of nature is so abundantly to the fore that you'd be forgiven for thinking that was a Miyazaki series.

So it's not for the action fan, but they have Gundam SEED anyway. If nature's your thing, and you have the patience and depth to appreciate this outstanding animation, then you'll be well advised to pick up a copy. And watch for the live action adaptation due this year too ^^

10
Gentle, powerful and provocative. A must.