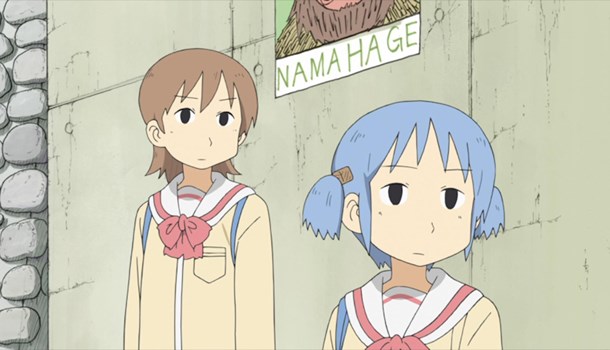 Its been quite a while since I whipped up a review for the first three episodes of Nichijou, and in that time a lot has happened in my relationship with this show. I dropped it from my weekly schedule, agonised over whether I should have done so, picked it back up again, and then agonised over doing that as well. The show has also inherited an unexpected title as the anime most likely to get me into arguments with my drinking buddies down the pub - I pity the poor clueless barflies who happened to overhear those back and forth debates over the relative merits of the show. Well, now I’ve watched the whole run of Nichijou, I think its time I put some thoughts down about it.

While the initial run of episodes primarily focused on the main trio of high school girls of Mio, Yukko and Mai and kept the remainder of the colourful cast pigeonholed into their own separate universes, as the series continues the scope of the show expands to pull each of the character groups present into a single contiguous universe. This slow inclusion of different isolated character groups really helps to make Nichijou more accessible to watch in the long run, especially as more and more character inter-relationships are revealed. The problem with this is that the characters and their interactions, barring a few very rare exceptions, aren’t fleshed out as the series continues; instead you get the feeling that previously obscured things are being revealed to you, as if someone was telling a story out of order and was constantly skipping backwards to fill in the setting. Sadly this process takes a very long time to happen, and it is not until this second half of the series that the separate micro-casts start to click together in any large-scale manner. There is also a very, very light smattering of character development which sneaks in during the last few episodes, suddenly appearing like a party guest who was aiming for “fashionably late” but instead slipped into just plain late.

The problem with Nichijou is that it acts as if it is, and sells itself as, a comedy series, and the majority of it is flat out not funny. If you go into Nichijou expecting wall-to-wall laughs (as you may rightfully demand from a supposed comedy show), you will end up being sorely disappointed.
This isn’t to say that the series is entirely devoid of humour - the show is more than capable of dishing out great humour in both short gags and extended sketches - but the amount of times that it misses the mark far outweighs the amount of times that the humour works. This imbalance is exacerbated by a number of additional glaring issues, chief among them being the pacing. I complained about this in the three-episode preview and the issue still remains - jokes take far too long to build up and play out, and scenes are often dragged out for far too long after the comedy payload is dropped. The habit of dragging scenes out long past their sell-by date is particularly frustrating when it happens to the more enjoyable sketches - you can feel the mirth leaving your body and your ire rising as the show steadfastly refuses to move on but instead drags the joke out to the detriment of the sketch as a whole. Bad jokes go on for far too long, and the good jokes are soured by poor handling. As I said in my initial preview, you spend a lot of Nichijou waiting for something funny to happen. The signal to noise ratio varies wildly from episode to episode, and only in rare instances does the good outweigh the bad.

As mentioned in my initial thoughts, Nichijou uses a wonderful muted colour palette for the majority of the show, slipping into more outlandish tones and layouts when things turn surreal. Everything is silky-smooth throughout, and is clearly the product of lavish time and attention. Sadly, this style can be both an advantage or a disadvantage depending on the material. When linked with a genuinely funny joke the art is great, often amplifying the humour present with some truly inspired presentation, but when it is linked with a failed joke the art only serves to draw the pain out and the sheer amount of time and effort lavished on the presentation feels like it is going to waste. Plus, as a side effect of the aforementioned poor pacing some of the more surreal artistic flourishes often outstay their welcome so that even these great moments lose their lustre.

Nichijou, to be blunt, is not particularly worth watching as a series. The sheer amount of tedium and flat-out un-funny sections you have to slog through far outweighs the amount of genuinely funny material that the show conceals to make it a worthwhile endeavour. Instead, I would argue that the best way to watch Nichijou is to trick someone else into doing so and letting them inform you of the actual funny parts so you can go watch just those. It’s that or skipping ahead through the majority of the episode each time you sit down to watch.
You can currently watch My Ordinary Life (aka Nichijou) in streaming form right here at UK Anime Network - the series is also now available via Anime on Demand.

5
A very pretty comedy show that occasionally succeeds, but more often than not leaves you waiting for something to laugh at.
LATEST REVIEWS