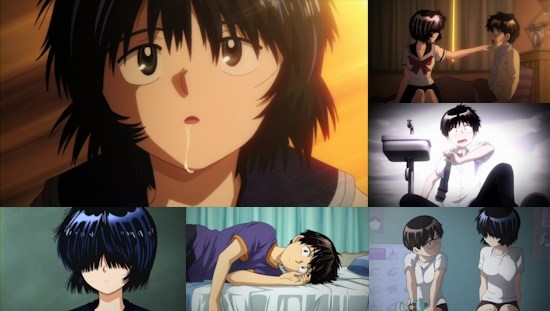 Based on the manga by Riichi Ueshiba, whose notable works appear to be slim pickings, I wasn't too interested in even watching Mysterious Girlfriend X after it was announced for the spring season. It felt as though I’d drawn the short straw in getting this show to review. But someone's got to do it, right?

At face value, the plot focuses on the relationship of two school children, Akira Tsubaki and Mikito Urabe, and their progression in growing up and falling in love with one another. These two characters feel incredibly 'typical', for lack of a better word. Tsubaki is your average male schoolboy lead and Urabe is your clichéd strange and mysterious transfer student who seems to be a bit of a loser at best.

Some viewers would probably be content with this premise of a blooming love between two students where the male lead is clearly interested in all of the things any self-respecting geek would be into. His room is made up of movie posters and overt references to pop culture, my personal favourite being the inclusion of a figure of The Big O’s Dorothy.  However, at this point I felt this show was not quite for me – it seemed like I’d seen this kind of romance with a sprinkle of slice of life series done many times before, and better.

As the series progresses though, there’s far more to it than your clichéd slice of life concoction. It’s like a virgin cocktail at first, but then to spice things up and make things a little different and more interesting it gets a little alcohol thrown in – the alcohol in this case being drool. Human saliva is what this show centres around; it’s the most important character in the story. Not just anyone’s drool though, its Urabe’s drool that holds the power of keeping me strangely gagging for more of this show.

Urabe is known for falling asleep at school and leaving a pool of drool on her desk. Tsubaki finds himself left alone in the classroom with nothing but a table of Urabe’s drool. Just like any other teenager that’s going through puberty and with the idea of sex just a pipedream, he tastes the drool. Okay, the last part of that sentence only holds some truth, because surely no one in their right minds would do that and this right here is what I like about the show. These characters are almost extensions of how real people act. They are very much caricatures of teenagers thinking about sex and generally being pervy. They are that part of your own being that wants to do something but knows it’s wrong or unacceptable to do so, so you don’t do it.

As a show, I’m surprised just how well Mysterious Girlfriend X managed to just pull me in, so behind the demonstration of how messed up we as individuals there seems to be a rather sweet coming of age story as Tsubaki falls in love with Urabe.

If you’re a fan of the manga, there’s no excuse for you to do anything but to watch this. If you have no idea what to expect from it you might as well give it a go just to experience how strangely satisfying seeing teenagers share drool between one another can be. The story moves at a tolerable pace and it’s kept me watching through to episode six;  I'll certainly now continue to watch until the end of the series.

7
If you want that little bit more from your cliché boy meets girl narrative, then give this a go!
LATEST REVIEWS