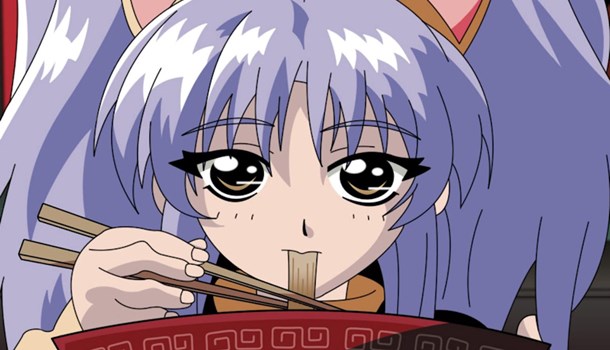 Nadesico the Movie is set 3 years after the original series, and each character has gone his or her own way after the Jovian Lizard menace has ended. Thing is, there's a new threat in town, and it's wiping out space colonies and whole fleets, seemingly appearing
and disappearing at will!

I found myself at a loss to review this initially. I sat watching the movie, taking in the rather gorgeous visuals and occasional scrap, making notes as usual.

Thing is, when I looked at my notes, I'd doodled a lot and written very little, which, for me at any rate, summed this up quite nicely.

The movie looks incredible, there's no doubt about it. Crystal clear visuals, lavishly drawn backgrounds and mecha to die for at every turn, CGI in abundance and just about everything you could want. Except, maybe, what made the original special.

I'll never understand the Japanese obsession with taking a popular anime series to the big screen and then stripping all the fun elements out of it. Nadesico was a comedy - tongue in cheek, self aware and clever. The movie is po-faced, grim and, in the end, a bit of a disappointment. Two of the central characters are very much not what they used to be, and the premise behind bringing the original crew back is pointless and wastes a lot of time. By the time they finally recruit the original members, the film is almost over, and the final scenes are somewhat less than satisfying.

I like Nadesico, but this wasn't what I had expected, and what's here wasn't very satisfying.
6
Pretty, but not the Nadesico I know and love.