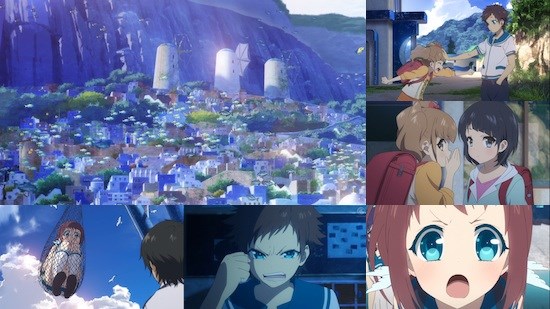 "Long ago, all humans lived in the ocean. But some who longed for the land abandoned the ocean, casting off the special raiments granted to them by the sea god to adapt them to life under the sea..."

This is what Crunchyroll has to say about the slice-of-life streaming series Nagi no Asukara. I must confess that from the synopsis, and what little I'd read elsewhere before the series aired, I really wasn't expecting to like this series. The basic premise of the series is so far-fetched that I expected my disbelief to remain firmly unsuspended, but it's here that the series hands out some big surprises: the basic premise, while completely unbelievable, works remarkably well in the context of the series. You will find yourself happily accepting that salt falls like snow under the sea and that a magical, hereditary, cloak called Ena enables some humans to live their lives underwater. This is aided in part by the series' laser-like focus on it's characters and reluctance to detail too much about the mechanics of life underwater, which prevents the viewer dwelling for too long on the implausibility of it all.

On the surface, Nagi no Asukara appears to be a fairly standard slice-of-life series, with many familiar themes and character traits on show. However, despite treading some oft-walked ground, the series (so far at least) manages to feel fresh. The series' main focus is on four childhood friends from the undersea village of Shioshishio: Hikari, Manaka, Chisaki and Kaname. Their school has been closed and they find themselves thrust into Hama Junior High, a school on (gasp) dry land. The main character Hikari is a male tsundere type who clearly has unresolved feelings for Manaka, whom he spends much of his time trying to protect in-between his angst fueled outbursts. Manaka herself is the archetypal damsel in distress and is never very far from tears. Much to Hikari's disdain Manaka seems more interested in one of the surface dwelling boys Tsumugu Kihara, and so we have ourselves the beginnings of a traditional love triangle. So far so cliché, or so you'd think. However, Chisaki - the sensible one of the group - only has eyes for Hikari, something which conflicts with her sisterly feelings towards Manaka and which is a fact only known to Kaname, the last of the four. Kaname's own romantic interests remain largely unexplored thus far, but there seem to be hints of affection for Chisaki. So, it is more of a love pentagon than a love triangle. Add into this mix Hikari's sister (Akari) dealing with her own love roller-coaster, the restrictive rules of the village, various types of friction between the surface and undersea worlds and you'll begin to get some idea of the tangled web Nagi no Asukara is weaving. There's a great deal to hook your interest here, and at only three episodes in I'm already longing to know how some of those threads play out.

So love, unrequited or otherwise, takes a central place in Nagi no Asukara's story, but to focus on that alone would do the series a disservice as the show so far contains plenty of drama and comedy. The comedy is regularly played off against that drama, often to great effect with some supreme comic timing on display in these early episodes. Before watching this series I'd never have imagined myself laughing out loud to mere flatulence gags, but somehow Nagi no Asukara manages to pull them off. I'd also never have thought that racist little girls sounded funny, but the two young girls Miuna and Sayu really steal the show for the brief periods they're on-screen and there are hints of much more depth hidden beneath the surface of these two seemingly hostile characters. The series also knows when not to make jokes, and deftly handles more serious issues such as societal rules, duty and xenophobia. These themes really begin to develop apace towards the end of the second episode, with Akari thrown into the midst of the conflict between the two worlds and finding herself with an unenviable choice. So, even in these early episodes the series shows signs of being much deeper than your average slice-of-life comedy; perhaps coming-of-age comedy drama might be a more appropriate label?

The animation and character designs in Nagi no Asukara are simply gorgeous - the colour palette is bright and vibrant, and the background artwork is sublime. That is to be expected though given the studio responsible for the series - PA Works are building themselves quite the reputation for excellent animation quality and they do not disappoint here. The voice acting is also of a high standard, and UK Anime regulars will recognise quite a few of the voices. For example, Hikari's sister Akari is played by Kaori Nazuka, the voice actress behind Lynette in Strike Witches and Lt. Ross in Fullmetal Alchemist: Brotherhood to name but a few. The soundtrack, while not spectacular, is competent and suits the series perfectly, following the mood of the onscreen events with aplomb.

In short then, Nagi no Asukara shows a good deal of promise on the strength of these early episodes. It is very difficult to judge a series such as this so early on but if it delivers on these promises we could well be looking at a contender for show of the season. I for one have my fingers crossed that PA Works will deliver on this one - I haven't enjoyed the opening episodes of a slice-of-life series quite this much in some time.

8
Some good early signs make this one to watch, especially for slice of life fans.
LATEST REVIEWS