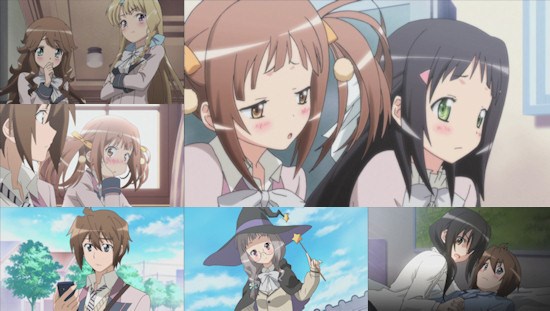 The death of a parent, particularly at a relatively early age for both parent and child, is a harrowing and emotional event.  At least normally it would be, but not in the case of "Nakaimo", which simply uses this tragedy as a springboard for its decidedly ridiculous premise.

As we follow our protagonist Shogo Mikadono, son and future heir of his father's megacorporation, said father's funeral sees Shogo mysteriously approached through an open window by a girl proclaiming to be his sister before stating her desire to marry Shogo - so far, so creepy.  With his dad's death comes certain expectations of our young star; namely, to prove himself worthy of his father's company, not just by graduating from a well-to-do academy but also by marrying by the time of his graduation.  What such a quick marriage has to do with being a successful businessman is entirely beyond me, but this is exactly the kind of logical disconnect which "Kono Naka ni Hitori, Imouto ga Iru!" (to give its full Japanese title) revels in.

Still, finding a suitable bride at this decent school doesn't seem like too much trouble for the handsome and polite Shogo, but wait - there's another fly in this particular ointment, namely the news that Shogo's unknown and seemingly illegitimate little sister is supposedly attending the school.  Of course, nobody wants to marry their own sister (unless you're a very particular type of anime fan), so can Shogo find himself a bride while avoiding the perils of marrying his own sister?

Admittedly, "who cares?" is my instant response to that question, and I'm not entirely sure that My Little Sister Is Among Them is particularly worried about this question either - by the end of its fourth episode, we've already added two of the show's cast to the "definitely not Shogo's sister" list, which in theory should give our protagonist plenty of time to spend the rest of the series enjoying the "hospitality" of the girls in question (and boy are they hospitable) without a care in the world.  This being a harem comedy anime series of course, that's decidedly unlikely to happen, and Shogo will instead most likely spend the rest of the show acting embarrassed around any show of female flesh and generally behaving like an idiot.  Can't we just petition for him to be stripped of his place as heir to his dad's company already, this guy can't even ask a simple question to a girl like "hey, I don't suppose we're blood relatives?" so he's hardly going to be the next Alan Sugar.

Ignoring its icky premise which effectively amounts to a game of little sister Russian roulette ("Who is IMOUTO?" trumpets the show's header, seemingly without irony), Nakaimo is a fan service vehicle, pure and simple - unfortunately, when most of that fan service is censored by skirts which cast impossible shadows or copious amounts of steam, its sole raison d'être is largely removed... although wait, did I see some nipples in one episode?  Actual, real... wait, not at all real, anime girl nipples. Wow!  That totally made watching this utter trash worthwhile!  Oops, there goes my sarcasm detector...

Beyond the promise of a little animated female flesh, there's absolutely nothing to redeem Nakaimo as a series - its protagonist initially promises to be a cut above the usual generic harem lead on account of his upbringing and status but proves to be the usual dumb guy whose ill-equipped to handle female attention, while the various female characters introduced thus far might as well be lumps of meat the way that they fling themselves at Shogo and try to tempt him with their bodies while only showing a bare minimum in terms of personality.  Then there are this show's attempts at comedy, which pretty much amounts to "walk in on nearly naked girl" while only occasionally striking out into the brave comedic frontier of "walk in on completely naked girl".

So, is there anything redeeming about this series at all?  Well, I have to admit that it looks pretty nice - the character designs are decent and the overall level of animation is decidedly easy on the eye, and the voice acting is about as good as you can hope for from a series based around paper-thin characterisation.

The visual prettiness might be enough to lure lovers of fan-service driven anime to this show, and that's fair enough, but for the vast majority of viewers the presence of more plot holes than a well-worn sieve and the utterly banal predictability of it all means this is a summer season anime that should be avoided at all costs.

You can currently watch Nakaimo - My Sister is Among Them! in streaming form right here at UK Anime Network!

2
Wafer thin characters play little sister Russian roulette, and even the fan service is largely censored. There is no reason to be watching this trashy series.
LATEST REVIEWS