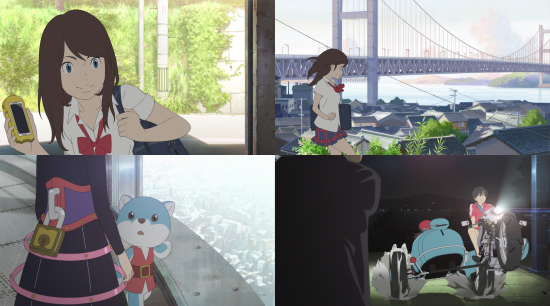 Baldrick from Blackadder Goes Forth said it best, “Never trust men with beards”. It is a sound piece of advice and, as a man with a full and well-groomed beard, I would concur with the advice that none of us are to be trusted! However, it must be said that men endowed with ample facial hair do make the best villains. Take, for example, Alan Rickman. Perhaps best known as playing the Sheriff of Nottingham, in Robin Hood: Prince of Thieves, and similarly as Hans Gruber in Die Hard. In both cases the beard makes the villain.

Therefore, I shall begin this review not by introducing the wonderful female protagonist, but instead the overt (and bearded) villain: Ichiro Watanabe. Mr Watanabe is not what you would call subtle, it is immeadiatly obvious that this gentleman is going to be trouble. From his attempts to steal back a half broken iPad, containing secret software, to his chase across the length of Japan to capture Kokone and a stuffed animal. Ichiro Watanabe is almost a caricature of the aforementioned Hans Gruber. The difference is that he doesn’t machine gun anyone, though that would have made for a completely different film. Unfortunately, unlike Hans Gruber, Mr Watanabe has absolutely no redeeming features, story or personality traits. He is a villain, pure and simple.

Napping Princess is a film which blends genres. While it feels like a fantasy from the moment the film opens onto the kingdom of Heartland, it neatly shifts genre into science fiction through the application of Arthur C Clarke’s 3rd Law. Which loosely states that any sufficiently advanced technology is indistinguishable from magic. This occurs when the princess of Heartland, Ancien, uses her magic IPad to bring to life inanimate objects, such as her stuffed toy dog Joy and a transforming motorcycle which she calls Heart. This technology is immediately forbidden and the princess is locked away in a glass tower, for it is just too dangerous!

At this point, we are given a proper introduction to our protagonist Kokone Morikawa, and her father Momotarou. The pair live together in a house attached to her father’s vehicle workshop. Momotarou is, well, standoffish to say the least. He is quiet, disconnected from the world, and is driven by grief from the death of his wife Ikumi in an accident many years ago. Consequently Kokone never really knew her mother, and while her father doesn’t talk much he did at least introduce her to the world of Heartland and Ancien - which Kokone visits in her dreams, during her frequent naps.

Unfortunatly it's not long before the family is torn apart by demands from the Shijima Motor Company for the software contained on a tablet, which Momotarou and Kokone hold. The company sends thugs, accompanied by Mr Watanabe, for Kokone and her father. It is then that Kokone finds her life skewed, as she lands in the unfortunate situation of having to rescue her father and set straight the accusations made by the Shijima Motor Company, in order to clear his name. On this journey, fantasy meshes which reality as Kokone discovers her mother’s legacy, while fighting a malignant evil within a once proud company.

Keni Kamiyama is best known for his works on Ghost in the Shell Stand Alone Complex and Eden of the East. His works are lauded for their depth in terms of social politics and psychology, and in general his characters (with the exception of Mr Watanabe) are incredibly detailed - to such a point where the viewer can make a real emotional investment in the characters. While they tend to be simply animated, I find that this only emphasises the emotion. However, it is a bit disconcerting when these simple characters are framed against luxurious vistas, such as the Great Seto Bridge in Okayama and the fantastical scenes which take place in Heartland. While this sounds like a criticism, it is true to form for the director, as he used similar styles in Eden of the East. Consequently. I found myself completely engrossed by the film, in no small part due to the excellent pacing throughout. You simply don’t get much time to breathe: From the suspenseful scenes as Kokone hides in her home, to the fights with a monster Colossus atop giant Enginehead robots, Napping Princess does not give you any time to rest.

I found the film to be wonderfully referential and full of anime tropes - such as the giant robot fighting a kaiju, the bearded villain, as well as the magical ability of Kokone and Ancien to survive falls from great heights and call upon autonomous vehicles. That said the film does not rely on any of the less wholesome anime tropes, which makes a refreshing change for this reviewer. In fact, the story and themes make this film easily accessible to younger audiences, while still being advanced enough to keep all age-groups gripped from start to finish. Though, yes, there are some flaws. By way of example I felt that the melding of Kokone’s dream worlds with the real world was used to hide elements which were either less interesting, or less well realised.

When all is said an done Napping Princess is quite simply jolly good fun. There was suspense, action, giant robots, technology, magic and perhaps more importantly: There was closure. The film delivers a strong finish which neatly tied up most of the plot devices. Napping Princess is a highly imaginative, fun, family friendly film. Though it may be a bit long, it manages to keep you welded to your seat due to excellent pacing and engaging characters. Trust this bearded person when I say: This is one film not to sleep through!