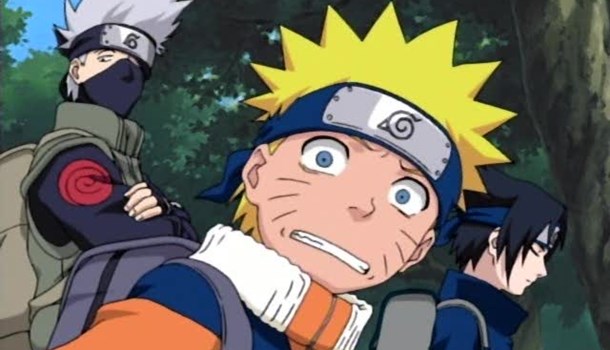 The first story sees Naruto and the gang escorting the cowardly Shibuki, teenage leader of the Hidden Waterfall village, home. All goes well, but the team find themselves on a rescue mission when the village is attacked by a group of rogue ninjas looking for the waterfall treasure, the Hero's Water.

As Naruto goes, this is straightforward fare - entertaining fights packed into a short time-slot, so at least you're not watching multiple episodes of the same fight (a bit of a problem in the ongoing series at times). As such, Lost Story makes for a fun, bite-sized Naruto adventure which doesn't overstay it's welcome and really doesn't require much prior knowledge of the series to enjoy fully. It would have been nice to see the rest of Naruto's team get some decent screen time, but other than this, no complaints.

The second, shorter feature has Naruto helping his number 1 fan, the highly irritating Konohamuru, find a flower to help him win the heart of a young girl about to leave the village. As mentioned earlier, it's subtitle only and therefore casual Naruto fans probably won't bother with it, which is a shame because it's actually rather sweet. As with Lost Story, it's entirely self-contained and doesn't affect the ongoing story arc to be found in the main series.

For £12.99, you get a reasonable deal, but it's also worth pointing out that you can get a lot more value for your Naruto cash when buying the series box-sets, so it's going to be interesting to see how well this sells. For Naruto completists it's an easy decision, and no one will walk away disappointed. For the rest of us, it's not a bad intro to the Naruto world, and a pleasant way to spend an hour of your time.