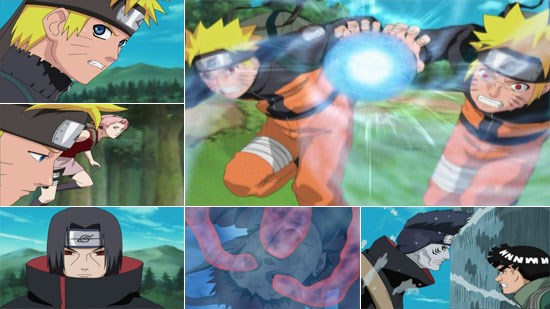 With Shippuden, Naruto has finally bounced back to the lofty highs that it enjoyed during the early days of the series. With a two and a half year time skip, things are able to enjoy a small amount of change while keeping an air of familiarity. While things are back up to scratch, can the series keep this momentum going?

Team Kakashi and Team Guy are locked in battle with Itachi and Kisame from Akatsuki, who are intending to slow the teams down to give time for the one-tailed-demon to be removed from Gaara. Even with all of the teams attacking, they still are proving no match for the duo.

The first part of Naruto Shippuden really did kick things up a notch. We caught up with old friends, but also went straight into the fight with Gaara in the sand village and Naruto and Sakura proving their new skills to Kakashi. Unfortunately it seems we have been taken down a gear once again with this release; while the fighting is still ongoing it does seem to be taking its time once again as the old hundred episode fights are starting to make their way back into the series. OK, it’s not quite a hundred episodes, but having two fights going on at the same time does bring things down a bit with one episode focusing on one fight, then moving over to the next. The constant jumping back and forth is a little disconcerting.

The one thing that pressed my buttons was at the end of the current fights a couple of episodes in. “They may have defeated me, but I was only at 20% of my power”. Not the exact words, but you can get where I’m going with this. Dragon Ball Z has a lot to answer for when it comes to this type of show, and when this gets spouted out the eyes roll, the sigh kicks in and you just know you're going to be in for the long haul. Thankfully the fight concludes, but it does beg the question of whether Shippuden is going to start falling back into its old tricks.

This box set is also quite battle intensive. For those looking for awesome fights and big explosions then they have come to the right place. The main battle towards the end of the discs is quite big, it is just a shame it very much gets drawn out. I can only hope they are getting this kind of thing out of the way early so the story can be progressed at a quicker pace later on.

Beyond that, there really isn’t much more to talk about for this set. The animation and designs keep to their higher standard from the last set of DVDs, but there is nothing really to write home about. Naruto fans will no doubt enjoy some more canon-centric story and the action nuts among us will enjoy the battle-intensive episodes present in this collection. Just don’t be expecting much more beyond that.

The standard production artwork and trailers along with the Japanese and English dubbing tracks.

7
More battle-focused than the last set, but enough to keep the fans happy.
LATEST REVIEWS