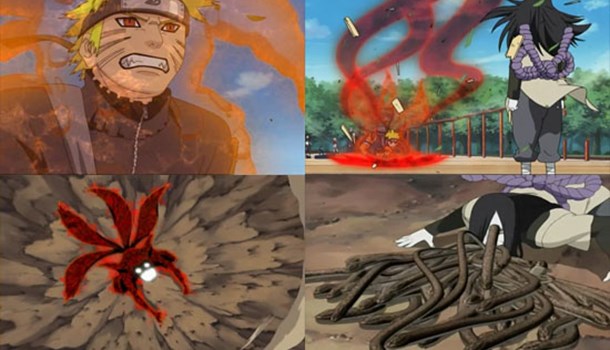 It is pretty unbelievable that it has taken so many episodes to get this point, but we finally reach what everyone has been waiting for; the show down that Naruto fans have been looking out for. Has it actually been worth the wait?

With the meeting on the bridge taking place, the Nine-Tail fox within Naruto starts to emerge and attacks Orochimaru. The two face off against each other while Sakura and new team leader Yamato take on Kabuto. But Naruto is constantly losing his humanity and it won’t be long at this rate before he becomes the new nine-tails.

If there is one thing to say about Shippuden it does, for the most part at least, move at a swift pace. Part four does at times keep up with the faster pace of Shippuden, though it admittedly starts off very slowly - the first episode of these DVDs is actually of everyone staring at each other across a bridge. I kid you not. This certainly takes the cake for the most time-wasting on show here, but the second episode doesn’t fare much better and we don’t actually get any serious progression until the third episode. From then on this collection of episodes keeps up quite a brisk pace, with plenty of action and story progression.

The main standout for this set has to be newcomer Sai. It could be argued that he is the new Sasuke, but he actually has a bit more to him than you would think. We get a look into his past and what actual relevance he has to the Naruto story as a whole. He has evolved from something beyond a replacement for Sasuke, we just have to hope that something more happens to him to make him just that little more interesting and necessary for the continuing storyline.

This package as a whole is a standard Naruto affair. Things do get kicked up a notch with the closing episodes as the duel between Naruto and a long running character finally kicks off, though it does seem to wrap up quite quickly which will make some fans a little annoyed seeing as we saw scenes of this during the opening episode of Shippuden.

For those loving all things Naruto, this volume while slow will no doubt offer more insight into the world of the orange ninja for you to devour. We just have to hope that future episodes give a little more pay-off than we manage to get here.

7
A good set of episodes, but without a huge amount of pay-off towards their end.
LATEST REVIEWS