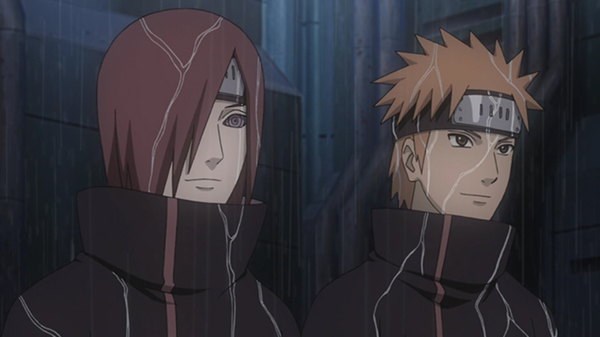 Well, I'm back on Naruto duty, so there's been a lot to catch up on with this release. A quick blast of Narutopedia and some fast viewing has gotten me up to speed, which is just as well because this latest release is anything but a jumping on point!

Fresh from the battle with Kazuma in volume 7, the team return to the Leaf Village in order to get some much needed rest. The village itself is in the process of tracking down the main series antagonist Orochimaru's hideout, and it isn't long before Naruto et al are sent on a mission to scout ahead and find him. No rest for the wicked eh?

Before long the team are facing off against Guren, one of Orochimaru's most loyal warriors - the female ninja battles with crystal fragments, and although the fight is a bit stilted, at least she seems a credible threat to the team. At least until they decide to call it a day and re-assess their respective positions. Erm, what?

And that's one of the major issues with this set; the fighting is very thin on the ground, and given the amount of filler involving Naruto and some toads (yes, seriously) you could come away from this set feeling somewhat short-changed.

Pacing is pretty poor with this set too; there's a lot of sequences that could have been finished in less than half of the time, and is it just me or has Naruto gone from like-able lunkhead to arrogant thicko? Sure, he's capable, but that would be the only thing to hold you back from introducing his face to the working end of a shovel if you were forced to spend any real time with him.

£15 for 5 hours of entertainment probably sounds like a bargain, but with the drag factor of the pacing, uninspired story and lack of any real punch, this is a series that badly needs re-energizing. Perhaps Naruto should have been given a longer rest at the village.

Animation is on par with what you'd expect from a weekly series, but perhaps it's time Naruto figured out what the endgame is going to be and start heading for it in order to inject some much needed structure and pacing back into what was a pretty powerful series.

Die hard fans may be on board for more of the same, but if this is the state of the series, I'm glad I jumped ship. Still, at least I can appreciate why the mere mention of the series sets kevin into a mad twitch and a serious case of Tourette's syndrome...

5
Neither progressive nor ground-breaking, it's more Naruto with added filler. One for fans.