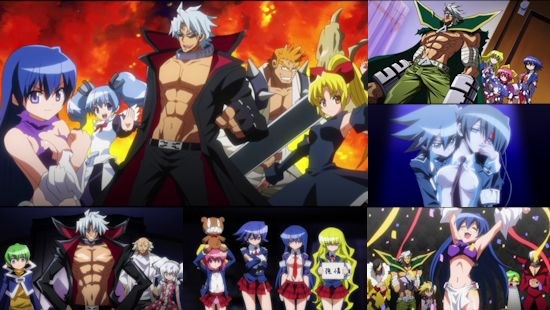 After lavishing us with over-the-top action in a shower of power and panties, we return for this second half of Madhouse's adaptation of Needless with things looking pretty dire for our ragtag group of heroes.

Thanks to the brainwashing of Eve to turn her against her former comrades, it seems as if all hope is lost for Blade and the gang.  Of course, that would make the second half of this series rather short if that were actually the case, so there are some twists and turns in this particular scenario yet.

In fact, this second half of Needless could probably be renamed "Twists and Turns: The Anime", such is its dedication in attempting to produce revelation after revelation in-between (or during) its bouts of action.  In a sense, the series has simply given itself too much to do after spending so much of its first half basically having fun and larking around with its premise in the name of comedy and cramming as many panty shots into each episode as possible - it's a realisation that comes suddenly to the series, and like a wayward student threatened with suspension it suddenly knuckles down and starts working hard on its story.

This means we're treated (and I use the term "treated" loosely here) to some long and meticulous flashbacks that explain the origins of the Adam project, Blade's relationship with Eve and more.  Although these flashback sections aren't entirely bereft of humour, they're notably lifeless in comparison to the rest of the show and to be frank they're really quite dull as they pour exposition about things we'd been led not to care all that much about over the viewer's head.

That feeling of "oh God, we're running out of time!" extends all the way through to the ending of the series, which feels rushed and anything but satisfying as something that has been built up throughout the series ends up being far less impressive than it should have been, coupled with some even more daft plot twists which either don't really gel or have been telegraphed for an eternity and have no impact.

To some degree, it's almost a shame that the series felt the need to spend its time tying up loose ends and its major plot points at all, as the show is at its best when it's simply peppering episodes with over-the-top action, fan service and self-referential jokes about those elements.  There are moments sprinkled throughout which shows what the series could have been - periods of heavily stylised art and bombastic action that evokes Gurren Lagann, or laugh out loud funny one-liners and reactions to the insanity occurring on-screen that hit the mark wonderfully.

If only those moments came around more often we might have more nice things to say about Needless, but as it is the series as a whole is decidedly mediocre - any cool moments are at least equalled by dull or stupid ones, and the hugely uneven pacing of the second half of the series does a lot to undermine this volume in terms of providing any kind of entertainment value.

From a technical point of view, there's nothing to complaint about here - one hilarious moment where the subtitles get a character's attack name wrong even though they're saying it in English the subtitles are consistent and acceptable, video quality is good to the point of showing up the animation quality during its poorer moments, and the English dub does as good a job as you could realistically hope for with the series.  The inclusion of a bunch of extra short episodes (which sees lead male character Cruz cross-dressing, if that's your thing) alongside the usual text-free credits sequences is a nice addition for fans of the show to add a little extra value to the package as a whole.

Overall, Needless is one of those series that is fun in places but ultimately forgettable and never more than average - its larger than life approach to its story might engage you for a while, but it simply doesn't have the legs to carry the premise through to a suitably compelling conclusion.

English and Japanese stereo audio with English subtitles.  Extras consist of text-free opening and ending credits, and a series of "Secret of Lily" comedy short episodes.

5
Once the series drops its sense of dumb fun in favour of making serious inroads into telling its story, Needless becomes nothing more than an utterly mediocre and forgettable affair.
LATEST REVIEWS