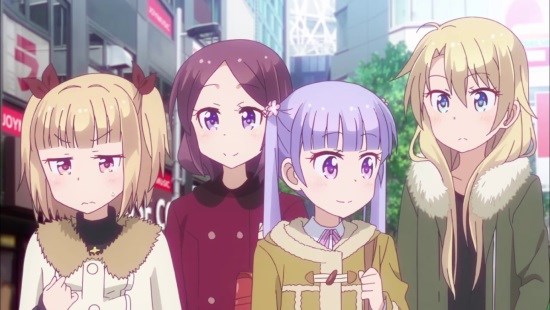 Anime brings many of our dreams and fantasies to life. Dreams of being surrounded by harems of gorgeous men and women, of having crazy superpowers or having wacky school adventures. New Game however brings with it a fantasy that seems to be all the more enviable these days (perhaps it’s just our age talking) - a perfect office workplace.

At just 17, Aoi Suzukaze has taken the huge step of choosing not to go to college. Instead she elects to join the workforce at games company called Eagle Jump in order to pursue her dream of becoming a character designer like her idol Ko Yagami. Now Aoi finds herself thrust into the whirlwind of the workplace where she must navigate everything from interpersonal relationships with her new co-workers to earning her first paycheck, all the while trying to figure out her own role.

She's not alone either, as each of her colleagues have their own issues to deal with; Hifumi's crippling social anxieties, Hajime's obsession with collectibles or Rin's not-so-secret crush. Still, when they come together the gang can help each other through most things and they may even manage to finish a game or two along the way!

New Game is  one of those shows that's incredibly comforting to watch. Everything about it is just so pleasant and relaxing, even when things aren't going well for the gang. Somehow they've managed to make a show about the idealised workplace where, rather than getting your back up because of how inaccurate it is to the real world, it radiates goodwill. It really is idealised too, with managers happily relaxing deadlines, making excuses for lateness and even telling people to take their breaks! That it manages to do this whilst still covering a workplace that has it's workers regularly having to put in long hours, often working well into the night, is pretty impressive. In fact when you look at things objectively you could almost find fault with the show for positively depicting the so-called "game development crunch times" which have been so heavily criticised in recent years.

What really sells the show are the characters though. They’re all so adorably earnest, even if at times they do feel like they’re all from different shows. I couldn't help but sit and watch their antics with a smile whilst gently dreaming about how nice it would be if your own workplace was even a fraction as good as what’s presented here...

The show is based on the 4-koma manga by Shōtarō Tokunō (which is also excellent by the way) and Studio Doga Kobo (who rather specialise in adapting 4-koma series and were also behind Monthly Girls Nozaki-kun) do a great job of transferring the aesthetic of the manga into animation. Director Yoshiyuki Fujiwara also does a brilliant job in pulling the whole thing together and proves to have a great eye for comic timing. In fact the only negative to the show's production is the casting of Madoka Asahina as Nene. Whether it’s her own voice or a directing choice, every time Nene opens her mouth it’s like nails on a chalkboard!

At the end of the day it’s very difficult to levy much criticism at a show that’s just so good at doing what it’s sets out to do - putting a smile on your face and keeping you in the mood for ‘just watch one more episode’. It’s also fantastic value given that Manga could easily have chosen to release both seasons separately. The Blu Ray release comes with a digital code to grab the show on Funimation’s website as well, just one of the benefits of their recent acquisition of Manga Entertainment.

Heck, the only big issue is that the show is now in the mighty company of the likes of Spice and Wolf and Silver Spoon in the ‘season 3 now???’ club!