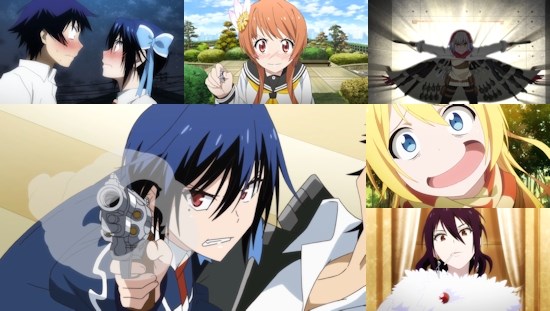 After bringing me plenty of beaming smiles and laughter across the entire course of its first season (soon to arrive in the UK on home video following its prior streaming release), Nisekoi returns this spring sporting a brand new colon. Of the punctuation rather than the bodily organ kind, I hasten to add.

Aside from its unusual designation of second season - well, unusual in the real world at least, anime sure does love its random punctuation to designate which season a show inhabits - little else has changed in the world of Nisekoi. This means that Raku Ichijou continues to be entirely baffled by the bevvy of fascinating girls that have surrounded him, and completely oblivious to their interest in him, all while continuing to serve as the pretend boyfriend of Chitoge Kirisaki lest their family's criminal gangs descend into all-out warfare if their secret is revealed.

Not that either Raku or Chitoge seem quite so concerned about playing the parts of boyfriend and girlfriend by this juncture - for Kirisaki's part she's all but revelling in it at this stage as she's come to realise her own feelings, while Raku seems to enjoy her company far more than previously. The contest for his affections seems all set to intensify however, as both the opening episodes of the series and its opening credits promise further additions to the stars that revolve around our protagonist's star of sheer idiocy.

Unfortunately, it's this further bulking out of the cast that could prove to be Nisekoi's ultimate downfall if these early episodes of series two are anything to go by. Admittedly its need to introduce these newcomers, such as another assassin and rival to Tsugumi in one episodes, or Chitoge's mother in another, necessitates giving them episodes to put their characters across, but it all leaves you with the impression that it might be diluting a winning formula a little too thin, which in turn strips it of some of its punch.

This shouldn't be taken to mean that the show has collapsed in on itself, mind - it continues to be regularly funny in terms of both content and presentation, and the slick production values and overall entertaining offered by the series are very much present and correct, but it just isn't hitting the previous heights accomplished by the show previously and the broadening of its cast feels largely responsible. It's telling that the best moments continue to be Raku's interactions with Chitoge and other members of the initial cast (not that we've seen much of Onodera at this point), but perhaps this will change once things settle down after these slightly fractured and fragmented early episodes - only time will tell on that front.

As we've just mentioned, Nisekoi's slick visuals are a big part of its overall package - whether it's simply characters pulling funny faces or taking something mundane and adding a sheen of over-the-top insanity to it, SHAFT's production values breathe life into much of what pans out in each episode, and it's a joy to watch (provided you aren't bored of their trademark style at this juncture). It's colourful, jovial and boasts great character designs, which adds a lot to the show's appeal in its own right here just as it did in the first season.

Having found even myself surprised how fervently I was banging the drum for Nisekoi as perhaps the most fun harem comedy series we've seen in a long, long time in spite of its obvious lack of originality, I was excited at the return of its anime adaptation to offer up more of the same. In those terms, I can't say that I'm disappointed to be able to rejoin the cast for more love-tinged silliness, but my excitement has been tempered somewhat by the impression that this might be the point that the series runs out of steam. Whether than comes to pass remains to be seen as this could simply be a blip while it changes up its cast, but for now perhaps a semi-colon would have been a more suitable addendum to its title than a colon, as it's not quite reached the exact heights that it's capable of.

7
Its visually engaging and broadly funny, but these episodes are lacking a little of the Nisekoi magic thanks to its focus on introducing new cast members.
LATEST REVIEWS