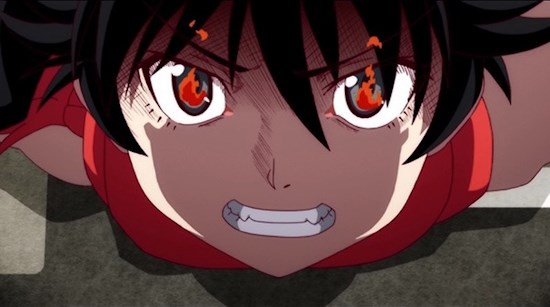 Ahh, the toothbrush. Such a simple everyday implement. Designed for the simple purpose of cleaning your teeth.  You’d never suspect that this simple, unassuming object could be used as a device of pure sexual torture. But that is exactly what you’re going to find here, as Nisemonogatari's second volume launches in the UK with the series' most infamous scene leading the charge. The Monogatari series has occasionally pushed the envelope, but with its second arc its creators are running up the flags and declaring war on the BBFC, who astonishingly have passed all four episodes uncut. This fact alone could make the release one of the big surprises of the year...

Following the man in chains we met at the beginning of the first arc, here we open with a metaphorical version of the same scene. Rather than being handcuffed to a chair however, our hapless, perverted hero Koyomi is chained to his desk to study for school, held there by the chains of fear Hanekawa has forged within him. Interruption comes in the form of sister Karen, with a worrying request that she be introduced to the wannabe pervert Kanbaru. It’s here that the toothbrush comes into play and... well, we won’t discuss the specifics too much but let’s just say its managed to create one of the most uncomfortable and erotic scenes in anime history that ends up just one terrifying younger sister away from a full-on love scene.  Following these events it’s time to make a move on the slow build to the second arc's main plot line. As with the first arc, although Tsukihi is a driving force behind the episode (and indeed, she is better served overall than Karen was in her arc) this is largely Araragi’s story, with Shinobu taking the second lead role as the pair must work to deal with a pair of highly unusual women who’ve headed into town and are about to cause a whole heap of trouble. He said with a posed look (sorry).

It has to be said that this second arc is a much stronger outing than the first. Being only four episodes long the story is much tighter and more focused (incestuous opener aside). Both of the "Fire Sisters" come across as much more well-rounded characters too, which is great. There is an almost disappointing lack of the rest of the cast it must be said – Hanekawa, Kanbaru and Hachikuji get only a single scene each across the arc, Senjoghara appears only in a still shot and poor Nadeko is absent entirely - but when it produces a storyline as fun and well-written as this one I can forgive that. Everything just feels that much more refined here - the comedy is much sharper and funnier, with gags never being allowed to run on as much as they had done before, and some brilliant in-jokes like Araragi attempting to justify to himself exactly why he’s going to provide Hachikuji with his traditional greeting. The action is also much better and fits in with the story here, rather than the Araragi/Karen fight of the prior arc which felt like it had been added just to have an action sequence. New characters Yozoru and Yotsugi are a little underwhelming here, coming off as little more than fairly wishy-washy villains, but they’re fun enough and one suspects that there’s likely to be a pay-off for them in Monogatari Second Season which will round them out a bit (Spoiler: Not so much, really - Ed).

On a technical level I’m not going to talk too much on the basics as I’ve previously said all that needs to be said about the visuals and the voice cast. What is new here is the most addictive and fun theme song to grace an anime in a long time. Platinum Disco by Yuka Iguchi is amazingly good fun and is accompanied by an on-screen dance which I wouldn’t be surprised to see done in live-action a la Haruhi’s Hare Hare Yukai. It says a lot that I watched it through four times in a marathon viewing of the arc and never got bored (and not because I couldn’t skip it either – all chapter points are present and exactly where they should be). On the other hand it has to be said that this release is not exactly brilliant value for money. Checking in with half the episodes of part one you’ll be paying the same price on Blu-Ray, with DVD customers looking at a £4 saving. With no real extras to speak of this isn’t exactly great and is the one big flaw of the release. Although I can appreciate releasing each arc in its entirety I can’t help but feel that it would have been better to split the episodes more evenly, or just sell the series as a single set.

This release however is not to be missed for fans of the franchise as it represents the best the series has to offer to this point. It has the humour, the action and the stunning visuals that you’re looking for, and even has an opening episode you can use to make random people uncomfortable (and they thought that only Jessica Rabbit could turn their heads...) One can only hope that the future instalments of the franchise are bound for a UK release and that this arc is the template they use, as Nisemonogatari's second story arc is a perfect example of how to do it!

10
The best entry yet in the Monogatari franchise.