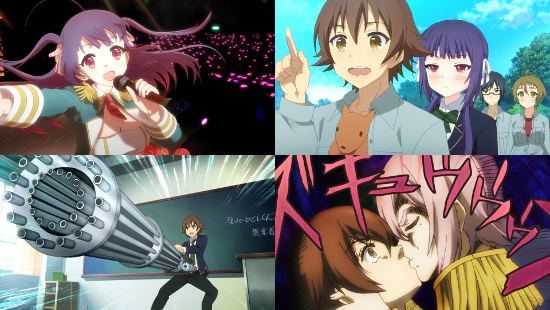 No-Rin is a terrible show and is not worth your time. There you go, that’s my review. Heck, I talked about it on the UK Anime podcast already, here. Wait, I have to write more? Awwww man, this show is not worth the effort, but here we go.

Kousaku Haku is a massive fan of the idol Yukatan, and is a massive creeper about it. Heck, he sleeps inside a body-pillow sized pillowcase with her image on it. Being a student at an agricultural high school, he uses his position to send her anonymous parcels of fresh-grown vegetables for no reason other than blind fandom. His world is crushed when Yukatan announces she is quitting, and who should turn up as a mysterious transfer student at Kosaku’s school shortly afterward but his idol crush, sporting a constantly downcast look and her civilian name, Ringo Kinoshita. Ringo joins the dorm that Kosaku and his friends are staying in, and they try and introduce her to the wonders of agriculture to cheer up her crushed spirits.

Sounds at least slightly interesting, right? I mean, the plot is nothing that hasn’t been done before (and very well, in some cases) but there is at least a core of something interesting there, which manages to shine through a few times over the course of the show’s length. However, the rest of the series is a schizophrenic mess cobbled together out of generic anime plots and tropes, with zero sense of flow or progression between episodes or even individual scenes, and an utterly intolerable perverted gaze hanging over the show that drags the whole thing down yet further. This last item is the most frustrating, giving you both the interminably dull and poorly structured love triangle and a recurring joke poking fun at a desperate single teacher which constantly shows up and is never funny right from the outset. The love triangle is almost as bad, as none of the actors involved ever do anything active to try and break the deadlock - it just drags on throughout the show, making the characters act like morons the whole time. The series often fancies itself as a comedy, and when the tepid love triangle runs out it loves to throw in constant overt references to other anime/games that equally fall flat and simply make you wish you were watching that (better) thing instead.

The show is in maximum overdrive setting up all this up in the first four episodes, after which it thankfully calms down but still does not do anything worthwhile with all its various elements. Instead, it's happy to flit between half-baked ideas and plotlines, often not even cleaning up its mess or providing conclusions inbetween. It even sets up an “Elite four” of wacky personalities as a massive, massive deal and then proceeds to do nothing with them but for a series of lukewarm jokes before stuffing them backstage and sometimes deigning to let them back out again. The show constantly does this, adding elements and storylines out of nowhere almost out of some bizarre obligation that it needs to complicate itself with these routine anime tropes. The whole thing feels like a chore to watch, which is honestly a shame as the few times the gears mesh and the show gets around to telling you about agricultural life and crops it’s really interesting. There is even a weird and truncated half-episode about using gaudy marketing to boost produce sales, a storyline that does a collossal amount of interesting setup for absolutely zero payoff - it just ends. No come-uppance, no lesson to learn. Still, sometimes the show actually manages to have an interesting character moment, a shining beacon that is then quickly destroyed by the show reverting back to the norm shortly afterwards.

There is one element I can praise without reservation however - the background art in the show is absolutely stunning and flat out beautiful. They convey a sense of warmth and groundedness to the locations which is really pleasant to behold. Sadly the characters themselves are not up to the same standard, in particular due to the designs provided by the illustrator from the original light novel series upon which the series is based. All the characters have eyes where the pupil is only very lightly shaded in using sparse diagonal lines, which gives them a off-putting dead-eye look that I could not get used to for the entire run of the show. Another quick note about the characters is that the previously-mentioned elite four do have interesting character designs, in some cases fit for inclusion into an Arc System Works fighting game. One of these four, the woodcutter, is voiced by Noboyuki Hiyama (Viral of Gurren Lagann fame) and does a bloody amazing job elevanting an otherwise dull character with his performance.

No-Rin is an awful show with a few praiseworthy elements cast adrift in a sea of unfocused, unfunny storylines and characters who constantly whiplash from being mildly empathetic to relentlessly unbearable. The few times the stars align and it does something interesting are sadly nothing more than anomalies in all the surrounding tripe.