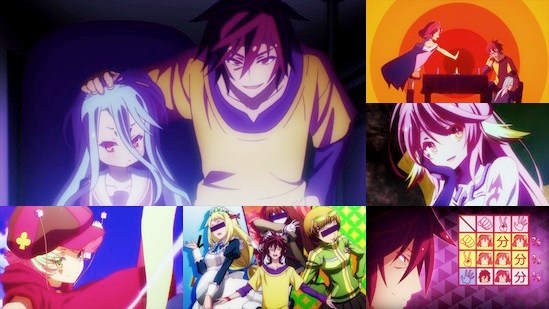 No Game No Life has already gained quite the reputation amongst UK anime releases. Originally slated for release back in the middle of 2015, it has suffered countless delays to the point where fans were beginning to wonder whether it would ever be released at all. But it seems like the waiting game has finally paid off, as the light-novel adapted series from Madhouse has finally arrived. Patience may be a virtue but we were beginning to lose hope, MVM Entertainment.

In reality, step-brother and sister Sora and Shiro are anti-social shut-ins with seemingly little interest in the wider world. However, online they are known as ‘Blank’ – an unbeatable duo that have attained near-legendary status. However, following an online chess victory against an anonymous opponent, the pair are suddenly transported to the strange world of Disboard. Their opponent then introduces himself as Tet – the one true god of this world, where everything (from minor squabbles to conquering nations) is decided via games that must follow ten simple rules (or ‘pledges’).

Finding themselves much more at home in Disboard than they ever were in reality, Blank soon make a name for themselves as they put their gaming prowess to the test – quickly finding themselves the new leaders of Imanity, the low-class race of humans living in this world. Begrudgingly aided by the former King’s granddaughter Stephanie Dola, the pair quickly set sights on a new target – earning the right to challenge god himself.

Basing a series around a protagonist (or protagonists in this case) that are always thinking five steps ahead of everyone else around them can be a risky strategy. For every Death Note and Code Geass, there’s a The Irregular at Magic High School lurking in the midst. Thankfully No Game Life falls in with the former rather than the latter, with Sora and Shiro proving to be far more lively and engaging than you’d expect a stereotypical pair of gamers of their description to be. Thrown into a world they seem to understand far better than anyone else inhabiting it, their victories are crafted in such a way that watching them be so good at it isn’t tedious – it makes you eager to see the full extent of what they are able to achieve. It also successfully pushes the teamwork element of their dynamic, with Sora handling the strategic element of their play while Shiro excels at the calculations behind it. Each game proves that one cannot succeed without the other, while helping to keep their interactions and dynamic interesting even when you’re sat there thinking that the two are far closer than siblings should be with each other.

A word of warning here though: if you are adverse to heavy levels of (usually unnecessary) fan service this might not be the show for you. As if the skimpy outfits, regular bath scenes and panty shots of an 11-year old aren’t enough to make eyes roll, a number of the games also have some striptease element to them – whether it’s the female cast taking to swimsuits during word association or blasting off underwear during a shoot ‘em up. On occasion there’s a decent joke to be had from these scenes, but most of the time its pretty bottom-barrel stuff that wouldn’t go amiss in shows that don’t have half the level of enjoyment this has.

Being initially based on a series of light novels (though a manga version has also started up since), No Game No Life naturally has a very descriptive element to it. The strategies and tactics used by both blank and their opponents are often explained in great detail, which is a big help as it’s quite easy to lose track of what’s been predetermined and what hasn’t. These big speeches (usually presented by Sora in grand fashion) are one of the highlights of No Game No Life as a whole, fully establishing their sheer dominance of Disboard and cementing how every little move they make seems to play a part in their grand plan. Of course, this is even more satisfying if you’ve been able to work these things out as they go along.

Madhouse’s presentation of the visual side of the series is particularly striking, helping to set the series apart from its source material by developing something that would instantly be lost in text format. Though populated with the kind of cliché races and character designs you’d see in the most basic of fantasy series, the colour palette, red character outlining and various other stylistic choices the studio really make it stand out from the crowd. One particularly great visual gag is the identity of Steph’s grandfather and Imanity’s previous ruler, who is never shown directly onscreen but looks rather familiar in his various royal portraits.

The most frustrating element of the series though is one that will be all too familiar to those who have ever watched a 13-episode series derived from ongoing source material – it has no definitive ending. In No Game No Life’s case this fact proves to be particularly irksome because Sora and Shiro’s end goal of taking on Tet is such an important aspect of the whole thing and constantly brought up, yet by the end of the final episode they are nowhere near attaining such a thing. The unreachable end starts becoming all too clear as the episodes slowly tick away, which slightly brings down what is otherwise a rather exhilarating end piece. With the series having originally aired in 2014 and still no signs of a second season on the horizon, fans may have to instead consult the light novels to find out where things go from here.

Although the fan service element is often too heavy-handed, No Game No Life is a thoroughly enjoyable series that makes excellent use of its core concept and provides the viewer with a real sense of satisfaction as Blank’s intricate plans slowly unfurl before your eyes. Sadly it is also a series that will likely leave you wanting closure, but at least it’s because everything that comes before the ending is pretty damn great.

English and Japanese stereo audio with English subtitles. Extras consist of audio commentaries (from the characters themselves) for episodes 1, 4, 6, 8, 10 and 12, six shorts, Japanese commericials, Japanese promos and text-free opening and ending credits.

Also available in a Limited Edition release boasting a rigid box, art cards and soundtrack CDs alongside the series on DVD and Blu-ray. You can see our unboxing of this edition right here on the site.

8
A delight from start to finish, even with some heavy fan service and the lack of a definitive ending.