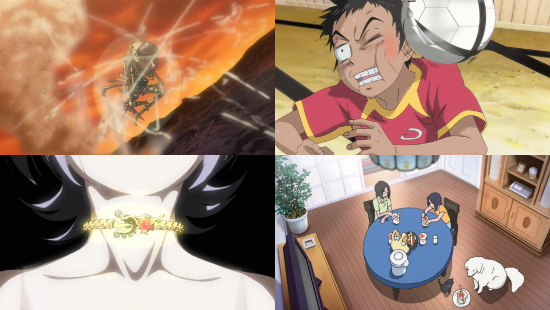 Noein: To Your Other Self - Collector's Edition Blu-ray

Noein is a series I really should have watched before now. I’ve had a DVD copy of it in a disc binder for the last 5 years, purchased at a MCM Comic Con for a stupidly low price - I just never got around to actually watching it. Now this new Blu-ray edition is out I am finally sitting down to watch it - was I right to let it fester in a disc binder all this time, or am I a chump for doing so?

It’s the first day of summer holiday, and Haruka doesn’t quite know what to do with the sudden influx of free time. Despite a bit of bickering she gets roped into a spooky midnight walk by her friends which goes horribly, horribly awry when strangers clad in black capes appear to try and kidnap her. The strangers, in particular a dour fellow who goes by the name of Karasu, tell Haruka that she is a key piece in an interdimensional puzzle that threatens their home. As events continue to spiral out of control, Haruka and her friends struggle to make sense of the events unfolding all around them, both the fantastical and the mundane.

Noein comes out of the gate swinging, and without a doubt has one of the strongest starts I have seen in anime for a long time. This isn’t just limited to the first episode - the whole of the first disc had me utterly enraptured and I was only able to peel myself away from the show when my PlayStation 4 unceremoniously rebooted and I realised it was 2AM.

The show has a powerful richness to it, coming together as something greater than the sum of its parts especially in the sheer emotional weight of its storytelling. There is a lot of interlocking parts to the story and it manages to keep you enthralled for the duration due to masterful pacing and the respect with which it treats it own material. Even minor events or character momentahanley_s have a huge impact and keep you emotionally tied up in the show. The cast are a fascinating collection of characters you quickly come to empathise with, in particular the primary cast of 12 year olds who manage to fully encapsulate the brattyness and intensity of that difficult age. Everything is the end of the world and impacts them greatly - simple interpersonal moments sometimes take greater emotional and personal precedence than the actual end of the world, which the show sells effortlessly. The adult cast are no slouches either, and the only shame is that there is not more show to go around to spend more time with them. One character in particular (who I will leave nameless to preserve the experience) has a fascinating and perfectly pitched arc that takes you through a complete personality 180, performing it effortlessly. The storyline is set up in a crisp, carefully pitched manner that engages you immediately and keeps you there, piling on developments and careful omissions that keep you pinned in rapt attention, hungry for more. Interspersed throughout the whole show are top notch action scenes, where the show flexes its artistic muscle (more on that later) and shoves you straight to the edge of your seat.

You may be waiting for the “but” to come here, and there is a small one - while the back half of the show still maintains a very high standard it loses some of its momentum and does not have the same intensity in the resolution of its multitudinous story threads. Part of this is because of how many story threads it has to tie up and credit must be given to the fact that the show actually manages to do so in a satisfactory manner - it's just that at the end it is doing so with much less punch than it had in setting them up. A key factor is the rather limp baton pass the show performs as it transitions between primary antagonists - the new, greater threats you are introduced to feels more theoretical than actual, and they are never quite brought into full focus even by the end of the show.

This being said, the minute-to-minute action and drama is still more than enough to keep you chomping at the bit, even during exposition-heavy scenes. And there are quite a few of them, some of which dive quite deep into various structures of quantum mechanics and the philosophy that surrounds it. This is catnip to me as a physics graduate and is core to the cosmology of the show itself; it directly affects the plot progression and so it is keenly important not to slip into considering them “technobabble” which requires a heightened level of engagement the whole way through, which can get tiring. On a related note I have to recommend against attempting to view the show in a “marathon” format - it is emotionally exhausting, or at least it certainly was for me.

Noein has a wonderful unique edge to the style for its characters - the backdrops are in general near-photographic (the show does a damn good job selling you on the port town of Hakodate), and the cast are presented in a muted colour palette with proportions that are more true to life than the norm in anime. People move in naturalistic human manners, especially when they are idling, which helps you read their body language and latch onto or empathise from the off. The most powerful stylised item are the eyes, which have an arresting scratchy look to them, particularly in close-up. You also have a tonne of wonderful eye candy in how the show depicts various mechanical apparatus, interfaces, effects and otherworldly goings on that each have their own distinctive identity that still melds into an overall cohesive style.

As mentioned before, action scenes are where the show breaks out its most intense efforts. Characters become furious kinetic abstracts of themselves, darting around the landscape with wild abandon blasting the hell out of it. Detail and cohesion of the characters is thrown out for raw guttural feeling, putting you right into the fight to sweat it out among the combatants. One fight that takes place at Hakodate dock was so sublime it had me whooping at the TV.

Noein also has great use of CG which is ahead of its time considering when the show was animated, both in raw fidelity and in its careful usage. It’s used smartly to enhance the scene rather than distract, carefully choosing the objects to present in CG to provide depth and motion within a scene. As an example, one shot the show uses multiple times is from the ceiling of Haruka’s room down past the ceiling fan to focus on the character sitting on the bed, showing careful and seamless composition.

The sound design in Noein is some stellar work that bolsters and binds all the other elements. The soundtrack has some intense, haunting tracks to it - in particular the main motif that carries throughout the show which before long establishes itself as a shortcut to pulling at your heart strings. The show is no slouch in effects as well, possessing an amazing arsenal of creepy, out-of-reality noises to accompany the fantastical and otherworldly elements in the show, giving them an undeniable impact.

Having finally watched Noein, I am kicking myself for letting those DVDs I bought so long ago rot for all that time. Taken overall, even including its slip-ups, the show sticks with you long after the ending. It weaves a powerful, bittersweet journey for the cast that leaves a strong impression and manages to do it nearly effortlessly, sneaking around the technobabble and the world-deciding conflicts so that by the end it felt like mere backdrop to the emotional impacts that are still resounding inside me as I write this.

The series comes with English 5.1 audio and Japanese 5.1 audio with either English or Spanish subtitles.

Extras are available on the third disc, comprising clean opening and ending credits, a collection of commericals for the series, an "On Location" feature with the director and Haruka's Japanese voice actor, an "Art Collection" (collecting the most striking scenes in the series compiled together), and a Commantary track for episode 24 from the three principle female character's voice actresses.

9
A fascinating universe-spanning tale with undeniable emotional impact that stays with you long after the show has concluded.
LATEST REVIEWS