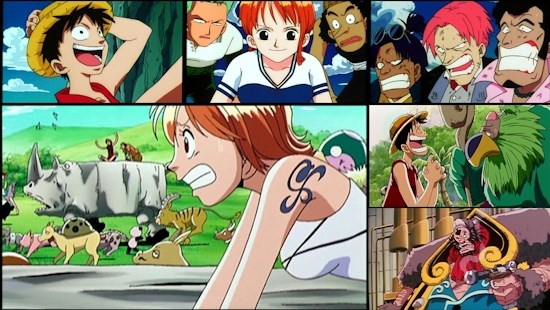 We've said it on several occasions before (and the fact that we've done so is good news in itself), but it's a rare treat to get a leg-up on other western territories and get hold of a particular anime release before it's even so much as announced elsewhere. This is the case with the early One Piece movies - while the US has us beat with releases of selected films way before they reach our shores, given time we'll be able to boast availability of all of the first ten movies from the franchise, which is surely reason enough for us to puff out our chests and crow at this vicarious victory a little.

Bragging rights aside however, how does this trio of early, subtitle-only films stack up within the context of this popular shounen powerhouse? Although many are probably well-aware of my disinterest in the One Piece TV series and my frustrations with it which brought that state of apathy about, it should probably be noted that I did enjoy watching Strong World at the inaugural Scotland Loves Anime as my first introduction to the universe, and that I'm also a big fan of Mamoru Hosoda's directorial effort within the movie series (which, of course, we'll be able to discuss at greater length in a future review when the film reaches the UK). With that pedigree in mind, can these first three films deliver satisfying entertainment in a similar vein?

As you'd expect, all three films on this first movie collection follow the tried and trusted template of being completely standalone stories featuring all of the cast that you know and love (a cast which you can see expand across these three early instalments, of course) as they're thrown into unique scenarios featuring original characters and scenarios to explore. The good news which comes from this is that provided you've either seen a little One Piece before, or picked up on the key points of the series via cultural osmosis, you should be able to jump into each and every one of these films without issue even if you aren't a regular viewer of the TV show or reader of the manga.

This collection starts, of course, with the first movie, imaginatively titled simply One Piece and following the Straw Hat crew as they (or more specifically, Nami) hunt the amassed treasures of a presumed dead pirate named Woonan, famous for stealing gold from those he judged didn't deserve such riches. Of course, Luffy and company aren't the only ones interested in such a grand prize, which puts them at loggerheads with El Drago and his own collection of mercenary pirates - there's more to this story than a simple race to find the treasure however, as events conspire to reveal more about both Woonan, a humble oden chef and his son before ensuring that we're treated to the requisite climactic battle between Luffy and El Drago.

Of all three films, this first movie feels the most like a simple extended episode of the anime series, both in looks and feel - the animation is solid but unspectacular, and the story is ultimately satisfying even if it takes a little too long to get to its pivotal moments, suggesting that he may have served better broken into a TV episode or two rather than a short film.

Next up is Adventures on Clockwork Island (or Adventure of Spiral Island depending upon whether you trust the DVD menu or the in-movie subtitles for its title), and arguably the strongest of the three films. What begins as a brief vacation for the Straw Hat pirates soon goes awry, as first their ship the Going Merry is stolen and then the gang is captured by two thieving brothers known as Borod and Akees. The pair's ultimate goal is to steal a diamond from the nearby Clockwork Island, a land ruled over by the Bear King and his Card Pirate crew, who have turned the island into a base used to manufacture deadly weaponry. With the Card Pirates succeeding in kidnapping Nami when they cross swords with both the brothers and Luffy's gang, both groups now have a vested interest in taking on the Bear King, only to find that all is not as it first seems when it comes to Borod's motivation for attacking the island.

If the first film feels like little more than an extended TV episode, Adventures on Clockwork Island feels far more like a "proper" Shounen Jump movie - yes, it still clocks in at under an hour, but there's some truly excellent animation on show here which makes for some great fight scenes and action, and the story feels like a far more ambitious proposition that twists and turns in a pleasing fashion before its eventual denouement. Besides, the film also contains a voice acting turn from Megumi Hayashibara, so what's not to like?

Finally we come to the third movie, Chopper's Kingdom in the Strange Animal Island, a film which sees underwater volcanoes blast the Going Merry onto a strange island filled with talking animals. Separated from the rest of the crew and falling from the sky into their midst, Barry Bary Chopper is mistaken for a new king amongst these animals, which leaves him embroiled in a battle for both land and treasure between his new subjects and an expert treasure hunter who will go to any lengths to bag the current apple of his greedy eye.

Overall, this third film is a pretty fun little outing that hits all of the right notes, but perhaps suffers in comparison to its immediate predecessor - its animation quality doesn't shine like that of the second film give or take one or two moments, and its story feels a little generic in comparison without any real standout moments. It's an enjoyable film, but not a particularly memorable one, and in those terms could even be seen as the weakest of the three within this collection.

Visually, all three of these films look a little dated - they don't boast the cleanest transfers you've ever seen and could really have done with some remastering work, but they're still watchable without spoiling your enjoyment too much provided you're willing to put up with them looking their age. The first of the three films also sounds a little "dirty" as if its voice performances in particular were recorded on the cheap, but the second and third movies both offer a much better audio experience and prove to be surprisingly dynamic despite being limited to stereo audio tracks.

The subtitles across all three films are almost perfect - an important point, given that this is the first western release and the lack of an English dub for any of the movies. Save a couple of very minor untranslated piece of on-screen text, you won't have any issues following what's going, nor will you find yourself tearing your hair out at any spelling or grammatical errors, as everything is entirely as it should be. As a whole, we really can't fault this release on a technical level, and it's a solid effort that One Piece fans will surely appreciate. We should, however, briefly note that the Dream Soccer King extra listed on the back of the box for this release isn't included here, leaving all of these films free of any bonus materials.

Looking across this movie collection, you could almost say that these first three films sum up very succinctly what One Piece is all about - something that can be seen as both a good and bad thing depending upon your perspective. At times, these films feel like they're ploughing a very singular furrow, playing the same jokes with the same over-the-top facial expressions, and leaning upon the same character archetypes over and over and over again - if you find these elements tiresome, then watching three short films that leverage them back to back could be a painful experience.

Dig a little deeper however, and both the popularity of the franchise and where these movies succeed soon comes into view - all three of these films exhibit a steady hand in terms of pace and story-telling, given sufficient budget it can provide some truly spectacular action and dynamism in its presentation, and the ability of the franchise to create lovable characters (even its villains are of the sort you can love to hate). These elements make for an enjoyable and entertaining package that won't surprise you or blow your mind, but one that will clearly appeal to One Piece fans and possibly offer an undemanding point for those uncertain about the franchise to jump in and give it a try.

All three films are presented in Japanese stereo with English subtitles - there are no extras across these three DVDs.

7
Its second film is the clear highlight, but this first movie collection offers up three slices of entertainment that perfectly exemplify what One Piece is all about.
LATEST REVIEWS