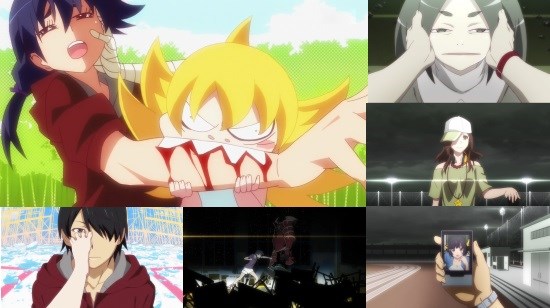 The Monogatari franchise has a funny way with titles. The large block of stories that made up Monogatari Second Season for example all had two other names (Nekomonogatari White was also Tsubasa Tiger, as well as being under the Monogatari Second Season umbrella for example). As Second Season was pretty much in chronological order this worked out fine for the western release that eschewed the 'Second Season' monkier. Owarimonogatari has gone the other way though and kept its main title accross all its releases. This is both a little odd in that the stories aren't really all that connected, and annoying for those of us who want to keep their collections in chronological order and now it doesn't look right and you'll have duplicate titles (plus the forthcoming Owarimonogatari Season 2 is really going to make this worse!) Now that that's out of the way, it's time to jump back several months from the first volume of Owarimonogatari to the time period of Nekomonogatri White. Ever wonder what Araragi was up to whilst Hanekawa was running around spawning wonderful doujinshi material with Senjoghara? Well, your questions will now be answered!
A young woman heads to a rendezvous with a young man in an old abandoned building late at night. She's not nervous and she's come prepared for the occasion. (Un)fortunatley for her the man she's to meet is Araragi and he's still just about able to resist Kanbaru's many charms. Sadly their tete-e-tete is interrupted by the arrival of a fully armoured samurai and they'll need some help from the likes of Shinobu and Kanbaru's Aunt Gaen to get to the bottom of things before Araragi is ripped limb from limb.
Kanbaru and Araragi may well be the franchise's best combination of characters, so it's brilliant to get another arc where they can endlessly bounce off one another for almost the whole thing. All the standard Monogatari trappings are present and accounted for from the brilliant visuals, bizarre backgrounds and the complex, twisting dialogue that ranges from straight-faced to farcical, often going from one to the other in the same sentence. Gaen, one of the franchises least-used characters, proves to be great fun again and her maniplulative machinations play out brilliantly and prove far more effective than whatever has been going on with Ougi Oshino for the past however long (at this point I kinda don't even care what her deal is anymore and would like her to go away if theres not going to be any pay-off).
Unfortunately it must be said that the plot doesn't quite hang together this time round; certainly not accross six episodes as Araragi and company bounce around from location to location, encounter to encounter, until it starts to feel very much like no-one on the production team really knew exactly what to do with this one either. Our fearsome samurai pops up every so often but never feels like much of a threat given that we've already seen episodes set after this one (and a cameo from Kizumonogatari ends up being much more of a potrential threat without even having to say or do much) and a strange amlgamated aberration proves to only exist to have a cliffhanger attached to on one of the episodes as it doesn't add to the story at all and is dispatched within minutes of the next episode starting.
Fortunately the cast all help this instalment remain just about solid enough to recommend giving it a watch. If nothing else you'll love it when you find out what Kanbaru sends Araragi to buy for her...

7
A must for Kanbaru fans everywhere.