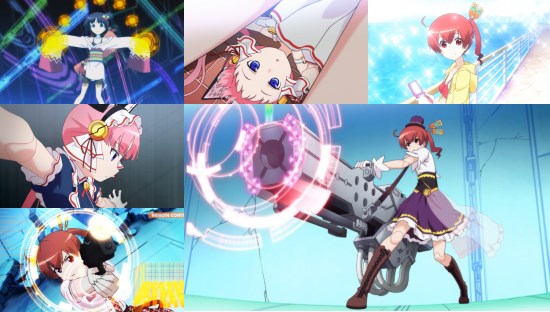 What happens when you throw the respective creators of Ghost in the Shell and Excel Saga in a room together and tell them to write a manga? It's the kind of question that should make for an interesting thought experiment, but instead it's a reality and the result is Pandora in the Crimson Shell: Ghost Urn. As you might expect from a project born from the minds of Masamune Shirow and Rikdo Koshi, it's a bit weird...

It's arguably Shirow's influence which is the most keenly felt initially, and not just from the title featuring the words "ghost" and "shell" in it. His sci-fi concept takes in a lot of the things you'd expect to see from this creator - a world where a full-body cyborg is an unusual but not unheard of sight; one where technology reigns supreme everywhere and is used for both fair means and foul; and one with cute little spider-like robots ready to do your bidding if you're on the cutting edge of this technology.

Our full-body cyborg star this time around is no well-trained example of military might however - Nene Nanakorobi is simply an innocent young girl who has grown used to her cyborg form and thinks nothing of it, using her abilities to play old video games rather than pondering her possibilities as an offensive weapon. Indeed, the series begins with Nene taking a simple trip to visit her aunt - a boat trip which brings her into contact with genius inventor Uzal and her adorable yet deadly cyborg companion Clarion.

Infatuated with Clarion (and understandably so, the little lady has cat ears and hisses when you try to touch them), Nene says goodbye to her new friends with a heavy heart as they disembark from their boat - this is a short-lived goodbye however, as chaos soon breaks loose on Cenancle Island where they've just arrived. Before she knows it, Nene is dragged into the crazy and dangerous world of Uzal and Clarion, which in turn leads to her using her cyborg body in ways that she never imagined courtesy of an application named the Pandora Device which pushes it to its limits.

It's at this point where the full force of this show's weirdness ensues over its first three episodes - before the first episode is up, Nene has had her fingers buried inside Clarion's crotch (it isn't quite as lewd as it sounds, but not by much) and our antagonists in this early skirmish are all wearing cosplay of some kind, and by the third we're contending with a three-legged lion AI amongst other things. Even three episodes in, we're still only at the point of setting up Nene and Clarion's relationship and fully introducing the cast, so it's hard to say where we're going from here - will we be indulging in some deep dives into the ramifications of putting a human brain or conscience into a cyborg, or will we be sticking with lots of technobabble-soaked goofiness as much of these early instalments has proved willing to indulge in?

The odd thing is, I'm not sure if I have a preference for which direction the series goes in. On the one hand I'd love to see the show work hard at developing Nene and Clarion's friendship while also focusing on Nene's abilities as a full-body cyborg and what that means for her personally. Yet, on the other, just watching our main duo get caught up in a variety of madcap adventures with a serving of silliness is actually pretty fun for the most part, so perhaps there's sufficient potential in the zany sci-fi comedy route. Perhaps the ideal is a blend of both aspects to the series, but given how jarring the switches from nanomachines to nonsense have often proved so far, that may simply not work in its favour.

From a presentational standpoint, it has to be said that Pandora in the Crimson Shell looks like a particularly poor low-budget (or otherwise rushed) series that struggles whenever it has to do anything other than superdeformed comedy - it's ugly, and its animation is as limited as it comes. In all fairness though, Studio Gokumi make a game attempt at making the world of Cenancle Island an interesting one - most notably, it plays wonderfully on the premise that any sufficiently advanced technology is indistinguishable from magic by effectively making parts of the show play out like a magical girl series, complete with transformation sequences and defensive barriers that could have been borrowed from a neighbouring magical high school. This is the tip of a particularly charming iceberg that at least manages to nullify many of those animation woes - there's enough character here to sidestep some of the biggest problems and keep you watching even when characters are veering off-model left, right and centre.

I do have to reserve at least a brief moment to mention the great Technoboys Pulcraft Green-Fund soundtrack that accompanies the series - my love of their electronic fare is well-known by this point, but it's a perfect fit for Pandora in the Crimson Shell and serves just as admirably as you'd expect. Heck, one of the tracks even sounds like the second coming of Witch Activity, which is no bad thing at all.

If you're pondering whether or not to watch Pandora in the Crimson Shell: Ghost Urn, my response is "Hmmm, maybe?" Add a few more question marks to get the full gist of my uncertainty though. My gut feeling is that I rather like the series - as mentioned, it has charm and character in both its cast and presentation, and there are some interesting facets to the world it's presented that the show occasionally manages to have a lot of fun with. What I'm not so sure about is where the series goes from here - we've only just finished setting up the series at the end of episode three, and there are plenty of paths it could traverse moving forward.

For now then, perhaps it's best to say this - if you want to see a concept created by Masamune Shirow packed with goofy comedy reminiscent of a slightly more sedate Excel Saga, then you should at least give this series a try to see if it'll float your boat.

You can currently view Pandora in the Crimson Shell: Ghost Urn in streaming form on Animax UK and DAISUKI.

6
Not a good-looking series, but an interesting confluence of hard sci-fi and goofy comedy that might just work in the long run.
LATEST REVIEWS