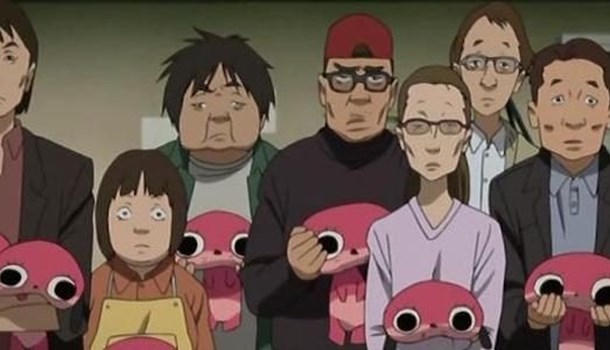 The late, great Satoshi Kon was responsible for some truly spectacular projects, from the psychological thriller Perfect Blue all the way to his final film, Paprika (which was in many ways a direct counterpoint to his first, though that is a discussion for another article). In all that time however he directed only one series – Paranoia Agent. It’s a series that I’ve long looked forward to seeing both for the sake of having seen all Kon’s works and also because of it’s intriguing, dark premise. Now that it’s arriving on Blu-ray from MVM what better time to dive into the world of Kon’s mind one more time?

In the series, quiet, unassuming Tsukiko Sagi works as a character designer and is responsible for creating a popular plush toy character which brings her much acclaim. Her life however reflects little glory and in truth is that she’d much rather be left in peace. Her life is about to take an unexpected twist however, as while travelling home in the dark one night she is attacked by a young boy with a baseball bat. As a pair of detectives try to get to the bottom of the case, the media grasps hold of the story and dub the attacker ‘Shounen Bat’ (or ‘Lil’ Slugger’ if you’re watching the dub), and a string of similar attacks soon follow as the strange figure is in turn feared and revered.

Describing Paranoia agent is an awkward task. When you get right down to it the paragraph above is little more than a description of the first episode, and when I search back through the internet looking at DVD covers for previous releases of the series they all describe matters in pretty much the same way. This, in part, is the problem with the show, albeit one which is crafted by the show’s marketing rather than by the series itself. You see, the gritty detective drama that the first episode, along with all the marketing, suggests will be the core of the show is in fact...not really a big part of matters at all, which, when you get down to it, is a bit a disappointment.

In actual fact the series is more aptly described as a loosely connected anthology, following a series of characters linked mostly by the fact that sooner or later someone is going to get hit over the head with a baseball bat. (Written that way it sounds like the show should be a comedy...). You can certainly see the issue in trying to market the show! If anything the format of the series reminds me more of The Twilight Zone than anything as it bounces merrily from character to character, even going so fas as to occasionally switch up the animation style and setting.

Sadly even once you get over the fact that the show is not what you were expecting there isn’t really much there to entertain. This is largely because pretty much all of the characters are just so flat-out unlikeable and, with the way the show plays out, doesn’t even allow the audience to have much in the way of satisfaction when they do finally meet their fates. This is further compounded by the fact that only a few of the characters exist outside their own episodes, so there just isn’t much time for you to get invested in them or their stories. Take the third episode for example which deals with a woman who is a tutor by day and a hooker by night. There’s definate potential here if any time had been given to allow matters to develop (and if the central role had had any actual character to it), and the echoes of Perfect Blue are pretty explicitly clear. But crammed into 20 minutes? It was never going to work!

Rather than be the central mystery, Shounen Bat becomes little more than a cypher to help push things along (at least until the series' final episodes which bring matters round to a rather unsatisfactory conclusion) and the detectives investigating him prove so irrelevant to proceedings that they drop out of the story all together after a while!

There are however a few redeeming moments to the series. Susumu Hirasawa’s score for one is very strong throughout and you can certainly see the evolution that led from Paranoia Agent through to his work on Paprika. The animation, whilst largely plain, is willing to take risks as the show progresses with different episodes showcasing a variety of styles which is great to see – this is particularly apparent in episode 10 which, despite all its faults, is almost a kind of proto-Shirobako.

Episode 8 proves to be the pinnacle of the series however, the oft-controversial story of three people trying and failing to kill themselves is bizarre, intriguing and surprisingly humorous (and appears to be presented in it’s uncut form here) and is a glimpse at the heights that the series aspires to.

Sadly though this just isn’t really enough to justify slogging through the series. Ultimately, whilst there may not be other shows that try all the things Paranoia Agent tries to cram in, there are other shows that take the elements and do them justice. Even Kon himself explores most of the concepts better within his film work. My advice would be to pass on this unless you’re an out and out completionist and stick Paprika back on instead.