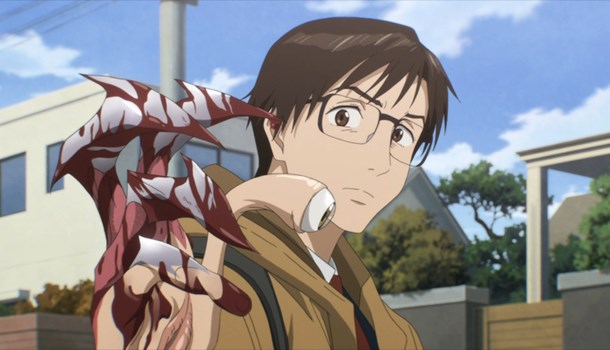 Based on the 1988 manga by Hitoshi Iwaaki, 2014's anime adaptation, Parasyte -the maxim- recently hit Netflix. A tale of parasitic invaders of unknown origin, the series features lashings of body horror and casual violence. Not usually my sort of thing, but I was introduced to the manga in the early 90's by anime historian Leah Holmes, and it became a macabre favourite amidst my otherwise pretty tame manga library. When it became available to stream I just had to see how it compared to the original that captured my imagination nearly 30 years ago.

Shinichi Izumi is the unfortunate individual who is attacked by one of these mysterious parasytes, but thanks to his quick thinking (and the fact he was wearing headphones, covering his ears), the little sod was only able to penetrate his right arm and not eat his brain as intended. In order to survive. Naming his new partner Migi, the pair are able to converse and discuss strategy - Migi is cold and efficient, concerned only with survival and discovering more about itself. This makes Shinichi's personal life rather complex, with events escalating from his personal life to a more widespread threat. While Shinichi's newfound partner can only manipulate his arm into a bladed weapon, other creatures can manipulate their heads, and even bite off an entire human bonce in one gulp, making them formidable opponents. With Parasytes able to hide their monstrous forms, they can be anyone and strike at any time.

The anime closely follows the manga, and this is no bad thing. The plotting for the series is tight, with the alien creatures evolving in both type and motivation throughout the show, becoming more than just mindless monsters. With their sinister intent and split factions, our poor hero doesn't know who to trust or even which of his enemies can be reasoned with. This lends proceedings an unpredictable air, and even though I knew what was coming from reading the manga, I enjoyed the way in which the anime brought key scenes to life.

Because the series adheres to the manga so closely, the pacing can feel a little uneven at times. The show takes detours that can feel a little unnecessary to the main plot, but made sense in the manga because it had arcs that pushed character development separated into well defined chapters - in even, 22 minute episodes the momentum can feel lost as it wanders off to hit the same beats. That said, at no point in the show was I bored, engaged as I was with Shinichi's dilemma and the brilliant chemistry between our hero and his right hand man (well, right hand Parasyte anyway). Every episode ends on an intriguing cliff-hanger, driving that "one more before bedtime" vibe that all the best anime have, from Gundam SEED to the Berserk TV series.

If I have one major criticism it's that the show looks a little too clean and bright - Parasyte is a psychological and body-horror tale, and while the manga's rougher style suited this perfectly, the mood isn't reflected in the clear sunny skies and crisp character lines that permeate the show. It's not a deal-breaker, and you could argue that the brightly coloured visuals make the darker moments of murder and mayhem all the more pronounced, but I would have liked a darker colour palette overall to set the tone, like a David Fincher film.

Set that aside, and it's a wonderful looking show - well animated, detailed and full of emotion. Shinichi's path is dark indeed, and by journey's end I really felt for the guy as he came to accept his new reality. There are a lot of emotional highs and lows here, and I'd recommend putting your phone down and giving it your full attention.

The music is terrific too, from the intriguing piano theme that heralds ominous truths through to the power-metal of the opening, Let Me Hear by Fear, and Loathing in Las Vegas. It's a refreshingly visceral introduction to the show, but one that belies the thoughtful narrative within.

For all it's violence and gore, the show has a philosophical heart. Examining the nature of humanity, how we treat other creatures on our planet and our ultimate place in the grander scheme of things, Migi makes an excellent, detached commentator on the human race, though as things develop even our Parasyte friend discovers new perspectives.

This is a solid show with a strong narrative arc, paying off everything it lays out. The violence leads to genuine consequences on all sides, which is refreshing in itself. There are fascinating ideas in here, and while the pacing may throw some, investment in the characters leads to heartfelt (and heart-rending) moments that repay you for your time with interest.

8
A strong narrative and intriguing premise raise this above it's body-horror peers. 24 episodes of thoughtful chills and thrills as fresh today as they were in 1988.