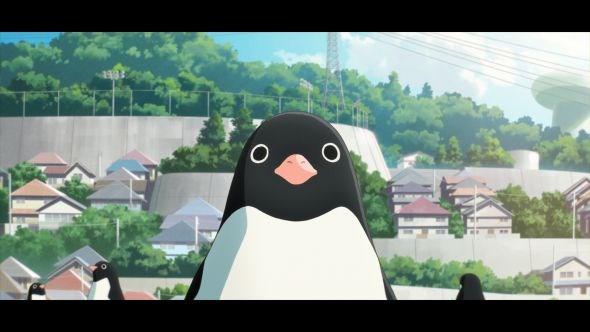 Based on a novel written by Tomihiko Morimi, who also wrote The Night is Short, Walk on Girl and Tatami Galaxy, Penguin Highway is a fantasy film revolving around the strange goings on in a small town. Things begin when the protagonist of the film, a 10 year old boy called Aoyama who is much wiser and somewhat more mature than his age would imply, decides to investigate the sudden and rather bizarre appearance of penguins in his home town. From his investigations he manages to relate this to a young woman working at the town's dental clinic and an odd power that she possesses. Thus Aoyama and a group of friends set out on an adventure to solve the mysterious goings on in the town using a more scientific approach.

The first thing to note about Penguin Highway, given its source material, is that it's a very weird film. Unfortunately, to go into just how weird it is would entail spoiling some major moments for it. So to avoid that I'm briefly going to go over some general themes and approaches this film takes that break away from typical family film conventions that Penguin Highway is trying to both emulate and subvert. Firstly the film is very nicely animated. The town is bright and colourful and the penguins are very cutely animated. Even when there a lot of penguins on screen each is animated very nicely which makes the scenes that they are involved in fun. From this the film really gets the visuals right, creating a great setting in the way the village looks with the penguins using this as their playground.

The film becomes rather unorthodox with having the main protagonist be a ten year old boy who acts like he's a 20 year old university student. We get some inner monologues and lines of dialogue from him stating how great a person he is; in turn leading to how great an adult he'll be which will make him a suitable husband for any girl who will be lucky to marry him. With this the audience is also treated to his thoughts on boobs. His thoughts are both mature and immature. In that he, as a ten year old, thinks about them quite a bit stating they calm him down when he sees them and that people should think about boobs at least half an hour every day. This line of thinking shows he is thinking about things a child isn't supposed to be thinking about, but at the same time thinking about them in a rather simple and childish manner.

From here the main crux of the protagonist's character comes into play with how the adventure aspect of the film is played out. This is the methods the characters go through to investigate the penguins in the town and also the other strange occurrences as well. From this we see the characters do some rather involved statistical analysis and experimentation that uses scientific methods more advanced than what they would have learned at school at this point. The film shows that two of the characters involved have fathers who are researchers so they are emulating techniques and methods they would have learned from them. What's surprising about Penguin Highway is that while other adventure films like this would have finding how the penguins are in the town as the end goal with everything else falling into place in a neat like package, this film finds out how rather quickly and spends the majority of the film trying to determine why.

This leads into scenes of the characters talking about their findings and trying to piece things together. Along the way there are clues in various conversations and for those with keen observation skills, they'll be able to figure out the mystery of the film. This approach unfortunately makes the film have issues with pacing; especially in the closing third act where things look like they are resolving but yet the film has more to add in before bringing things to their conclusion. The characters in the film while interesting at times are rather forgettable once everything is done. There are some good interactions between the core group of characters and a set of bully rival characters but these moments are rather sparse. Instead the film focuses mainly on a friendship between the young boy and woman who works at the dental clinic, mainly discussing his findings and ideas about what is happening in the town.

From all this the pacing of the movie is rather slow, so younger viewers who just want to see cute penguins will find it dull. There are some great comedic scenes and a very nice climactic scene involving the penguins that is nicely animated but without going into fuller detail to explain how odd things are in Penguin Highway, it's hard to describe just how it falters. Overall it's an interesting movie with some nice penguins in it and some intrigue, but it feels like it is missing something.