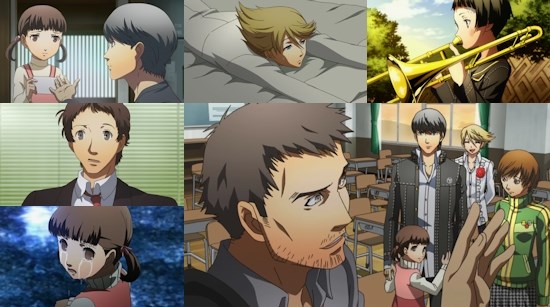 After two collections packed with great comedy and drama alike, Persona 4 in animated form comes to a close via this third and final volume courtesy of Kazé UK.

This being the end of the series there's clearly going to be serious business ahead, and we're reminded of this by an episode bringing some more focus to the relationship between Nanako and her father and the strain put upon it by the circumstances surrounding the death of her mother. Before we get too mired in drama however, there's still time for some more light-hearted comedy for us to enjoy, taking in those anime staples of the school cultural festival and a visit to a hot springs - clichéd scenarios for sure, but still ripe for laughs and pitched perfectly to offer a final reminder that this series is just as comfortable playing the clown as it is delving into the heart of its mysteries.

Of course, ultimately we have to delve into the heart of the series - what a dark heart it is too as the killer seemingly re-emerges to strike someone near and dear to Narukami. This in turn ultimately brings us to first another do or die battle within the TV world, followed by some of the most heart-rending and emotional scenes that the series has provided thus far. Persona 4 can make you cry as well laugh, that much is guaranteed.

It's a shame really that this is the point where the series makes its biggest mis-step - it isn't really the fault of this anime adaptation as it's merely following the lead of the original game, but this most potently stirring moment is diluted entirely by the story doing a U-turn and choosing to cop-out from the route its traversed. This dissolves a lot of that striking emotion in an instant, and it's arguably a decision that the series never entirely recovers from - it isn't quite "jumping the shark" as much as a hop over the bonnet of a stretch limousine.

The same kind of poor decision-making could also be levelled at the show's "True End" OVA, which adds a final twist to the series that feels like a story that's trying too hard to pull the rug out from under the view and instead becomes a slightly laughable revelation too far for the series.

Thankfully this doesn't diminish the "main" ending to the series, which is a satisfying affair from its big reveals through to the inevitable final boss battle that the climax to the show becomes. It's a real shame that some of the story-telling around it feels a little suspect, as taken in isolation it's a perfect end to the show that delivers everything that you could ask from it.

As we weren't provided with a Blu-Ray copy of this volume of Persona 4, we instead made do with the DVD side of this combo pack release. In terms of video quality, we have no complaints, with everything looking pretty good and the lack of High Definition proving not to be too huge a blow for a series that doesn't exactly boast top-notch animation, particularly in these latter episodes as budget and time constraints seem to pinch quite badly in places. The same can't be said of the release's audio - although it's fine for the most part and dialogue is clear and well-delivered by both the English and Japanese casts, the after-effects of the release's NTSC to PAL conversion has left some of its soundtrack a little garbled and generally "off" sounding. It isn't a major impact to the enjoyment of the series as a whole, but it can be a little distracting. In terms of subtitling, we have no complaints here beyond our prior mention that on-screen text is never translated, which can be frustrating from time to time.

Taken as a whole, Persona 4: The Animation is a terrific series which makes full use of its cast of characters and premise to deliver a hugely entertaining series that expertly crafts itself out of the occurrences in the original game in a compelling way - the manner in which it blends comedy, drama and slices of action shouldn't be underestimated. That this final set of episodes is perhaps the weakest is not an indictment of the show as a whole, but simply the fact that elements of its finale aren't as strong as everything that preceded it. Provided you can overlook a couple of narrative miscalculations, the series as a whole is well worth watching whether you've played the original game before or are entirely new to the franchise.

English and Japanese stereo audio with English subtitles.  Extras consist of a text-free opening and ending, and a fourth Jikken-kun drama short.

8
Some weak aspects to its latter episodes are still outweighed by some impressive drama and comedy to make for a largely satisfying end to this series.
LATEST REVIEWS