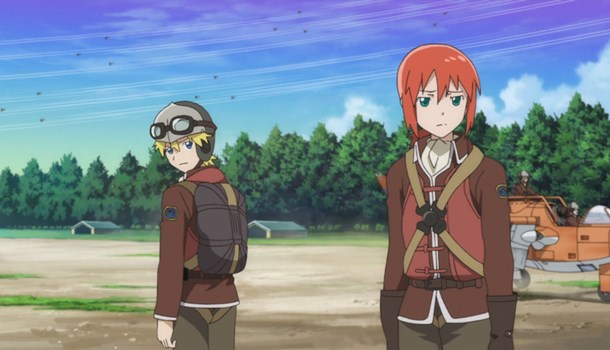 Hello everyone, it's the opening paragraph of one of my reviews. You know how these go - by the end of it I'll finish up on some thematic analogy, asking if the show "flies high or sinks low?", for instance. If there's one thing The Pilot's Love Song succeeds at it is sparing me the effort of thinking up witty new similes, as it let me know the answer straight away. I can an tell you at exactly what point The Pilot's Love Song fails. It's at about a minute and a half in. Our pilot hero grits his teeth and yells "I won't let anyone else die!" as he rams on his craft's throttle to scream into a dogfight. Seconds earlier enemy fighters plummeted out of the sky, burning and riddled with cannon fire. I assume they didn't count.

The Pilot's Love Song is brought to us via Crunchyroll as a stand-alone series, but it is part of a wider and extensive canon. An adaptation of the complete five-volume light novel series written between 2009-2011 by Kuroku Inamura, it shares the setting of his earlier light novel Remembrances of a Certain Pilot (with a movie version released in 2011 as The Princess and the Pilot) and two other subsequent titles, the two-volume miniseries Nocturne of a Certain Pilot and the ongoing Oath of a Certain Pilot.

We follow a boy who glories in the name of Kal-el. He can't quite leap tall buildings in a single bound but has nonetheless been selected, along with his sister Ariel, to participate in a great journey of exploration. The world in which Kal-el lives consists of the three island nations Europe, Japan and India - erm, sorry, Balsteros, Qi and Benares - separated from each other by a giant waterfall that extends limitlessly beyond the horizons, and surrounded by endless, trackless ocean for thousands of miles from every compass point. It was once widely believed that there was literally nothing else to the world, but a tremendous discovery has been made. For the very first time, something has been found in the featureless seas - a band of fresh water, the "Holy Spring" spoken of in the world's creation myths. In response to this amazing find, the countries have banded together to create an expedition to fully explore the Holy Spring, and whether beyond it they can find the further promise foretold in the myths of the fabled "End of the Sky".

Central to the expedition is the giant floating island Isla, and accompanying it on its five-month journey to the Holy Spring is a squadron of airships and a wing of fighter craft, to be piloted by Kal-el and his fellow classmates of the military school that sits in Isla's green valleys. It seems to be a happy, joyous journey of discovery, but there are many unanswered questions: are the new schoolchildren on Isla not so much finding new land as defacing another place with the politics, divisions and rivalries of their own countries? More importantly, why do explorers crossing empty oceans need a whole fleet of military escorts...?

There are many stories that could be told with this set up. The eager thrill of discovery. The anxious trepidation of unknown dangers. The excitement of spiritual revelation. It's an open sky that can be explored in any direction - which makes A Pilot's Love Song all the more disastrous when this lawn dart of an anime chooses to ignore all that and instead plunge straight into the ground. After setting up its world, The Pilot's Love Song turns away from that unending absorbing horizon and substitutes a navel-gazing focus on social squabbles between the nobles and the commoners - the condescending elitists and the honest salts. Stop me if you've heard this before.

For a talentless hack with nothing interesting to say himself, he need only take the box of soap-flakes down off the shelf that reads "insert class struggle for instant sophistication!". This is the recourse of lame-duck attempts to be "radical" without actually being meaningful, and it's a distressingly common fault with a lot of predictable, bland, anodyne anime writing. Even the anime version of Romeo & friggin' Juliet of all things got flattened through this wringer, and so it proves with The Pilot's Love Song as well, all uniqueness and aspiration trammelled down into one neat roll-up sheet.

Does it matter that it's an entirely unoriginal storyline told a thousand time before, though? If it's an important and relevant point, surely it bears repeating and reinforcing? Actually, no. These ludicrous caricatures undermine themselves - The Pilot's Love Song can't even defend the points that it itself tries to raise. It's bad enough that the audience's intelligence is insulted with the picture-book childishness of this prejudice - someone is actually beaten up over spilt ice-cream. It's just a plain wafer cone, not even a nice waffle one. This sort of rubbish scarcely warrants a school playground tiff - trying to call it incisive social commentary only sabotages itself. Kal-El becomes smitten with a noble girl, Claire - is this going to be an instructive tale of how love crosses meaningless social boundaries? Not at all, because it's revealed that Kal-El is actually Prince Karl Von Albus, a deposed royal who as a young boy became The One That Got Away, surviving the revolution that executed his parents and hiding out as the adopted son of a sympathetic family of commoners. This situation could be an interesting study like The Count of Monte Cristo on how manners and appearance matter more than birth, but with his 'love song' the actual implication that an incompetent author evidently didn't realise he was making was that Karl and Claire form bonds because of their shared blueblood heritage, so far from dissolving social boundaries their relationship only makes the gates slam down even harder.

Most damningly, though, the setting itself doesn't agree with the premise the anime is trying to peddle. This sort of class-warfare plot might work if our heroes were ragged, filthy, penniless urchins living in a rancid, cholera-ridden slum - It'd be simplistically blunt and didactic to the point of idiocy, but it'd at least be understandable. It emphatically doesn't work when you've all been specially selected to participate in a historic international mission, you're all officers (the real Other Ranks, the maintenance crews, remain literally as background props), and are living in spacious dorms with rooms bigger than my entire apartment set in beautiful manicured garden grounds by a pristine lake far above the worms of the ground below.

I do not feel a mote of compassion for our heroes as victims struggling against unreasoned prejudice - I deride them as pompously self-important middle-class republicans who frankly would benefit from a bit of social stratification to extract their heads from their arses and remind them that they're not the centre of the universe, either. In short, the cast that we're supposed to be rooting for is the walking epitome of "first world problems" and their bleating does not inspire sympathy but contempt.

Finding no satisfaction in the character relations, then, can the overarching plot interest the viewer? This is again unrealised. In episode two we see a map - more than three-quarters of it is empty space, because there's nothing to see here. The expedition that Karl and his friends are part of is travelling to a place foretold, and found, by the ancient founding myths of their society and goddess Saint Alestea. Yet this incredibly momentous revelation seems to be received in a curiously subdued way. It's proving a religion and yet it's treated off-hand as almost a casual bit of incidental trivia. Do you think that a video recording of the Heavenly Host appearing before the shepherds of the Nativity would register with the people of our world with no more than a smile and a nod? There are so many themes that could be tackled here.  The relief of the validation of faith and hope, the question of whether one truth must necessarily lead to others and the issue of the origin and reliability of sacred texts, the simple wonder of being at the cusp of a momentous occasion, or the terrible, creeping fear that God will make Himself truly known - and not agree with you. The implications of this quest seem far more interesting than the turgid reheated and congealed red-vs-blue slop that the anime chooses instead to scrape off the pan, so why can't they be the focus instead? I can only conclude that the writers don't know how to make it the focus.

Why is the defence of an internationally important expedition being left to schoolchildren? Because the author has no ability to do more than copy-paste forumlas. He can't comprehend anything outside of the high school setting that's typical of nine-tenths of anime and just can't function unless he's colouring inside the lines of his template. Claire comes to have dinner with Kal-El and his friends at the start of episode three; it's no spoiler that she's going to be enchanted by their cheerful mateyness after her cold solitary upbringing, and love the "kurrie!" she's never tasted before. This goes back to the start of this review - given what Kal-el's declaration that "I won't let anyone else die!" is setting up, I really do not have the patience to sit through umpteen episodes of po-faced "people die if they are killed..." angst until the witless goon realises that soldiers are expected to, y'know, fight. I could break my formula to make my point in this review, so a professional author has no excuse.

The writing's awfulness is finally cast beyond retrieval by a dialogue in episode two, when a pupil asks his teacher the question I brought up in the synopsis above, what all the military hardware on Isla is actually for. The teacher actually says that it's a good question, but she just isn't going to answer it right now.  With foreshadowing as subtle and restrained as that, I'm sure the light novel will be a shoe-in for a Pulitzer.

Is there anything that I can concede to The Pilot's Love Song's advantage? The background artwork is nice enough, I suppose - the floating island of Isla is a genuinely beautiful place, albeit in a chintzy, too-bright superficial way. The aeroplanes also have a charming pre-war grace to them, although I'm not sure the designs were completely thought through when the co-pilot's going to get ripped out of that open-air dorsal cupola by the slipstream of any sort of speed.

I am completely and utterly bored stiff by The Pilot's Love Song. It ignores everything above it and aims low - and even then, it can't hit its target. Visually it's pretty enough, and with the first episode's in media res opening during a battle there's at least the promise that we'll see some aerial combat action to help enliven a heretofore drearily dull show, but with insipid characters, painfully formulaic plot and a completely incomprehensible failure to appreciate its own world building, The Pilot's Love Song is a badly-written, unremittingly stupid anime. Will Claire and Karl's relationship flourish? I couldn't care less, as this is a ship that should go down in flames.

You can currently watch The Pilot's Love Song in streaming form via Crunchyroll.

2
The chocks remain in place - the only reason this anime doesn't crash is because it can't even take off.