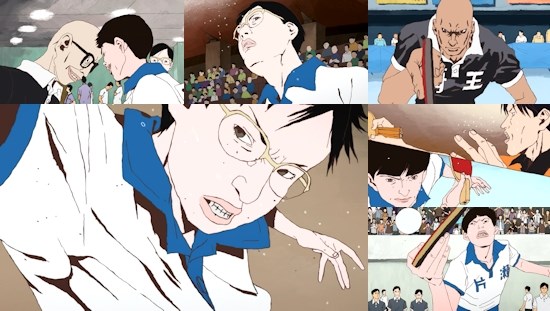 There's no shortage of great sports anime out there - whether it's the likes of the supernaturally super-powered Saki or more grounded fare like Giant Killing, sports lovers are well represented by shows that recreate the human drama of whatever game they base themselves around whilst also often appealing to those without an inherent interest in the sport in question.

Into this crowded arena has stepped much feted director Masaaki Yuasa, who has chosen to adapt Ping Pong, a critically acclaimed manga that has already enjoyed an equally lauded live-action film. What can Yuasa bring to the table? Given his previous work on the likes of The Tatami Galaxy, you'd be right to expect unique visuals and lots of character, that's for sure.

At the heart of Ping Pong lays two characters - Yutaka Hoshino, aka Peco, an exuberant and self-confident young lad whose energy and confidence seep out into the way he plays table tennis in spades, and best friend Makoto Tsukimoto, a seemingly less skilled player who goes by the nickname of Smile due to his dour demeanour and personality. These two disparate personalities have bonded around the game which they share a love of, even if their outlook on the sport varies wildly - Smile has no real interest in actually winning matches, let alone tournaments, whereas Peco views defeat as nothing short of a disaster.

These attitudes are thrown into sharp relief by the arrival in town of Kong Wenge, a top-level Chinese player who has nonetheless been "banished" to Japan due to an embarrassing defeat in his native country. Full of anger and frustration at this decision which has torn him from his homeland, Kong is a young man with a point to prove, and wastes no time in letting off some steam in a supposedly friendly game against Peco in which he absolutely destroys the young upstart who dares to challenge him. This is just the first step down a road which sees both Peco and Smile, and others around them, changing markedly as their fortunes both inside and outside of a table tennis hall shift and change.

Considering that it only has eleven episodes to work with it's amazing how much Ping Pong the Animation achieves in that time, taking in huge shifts in attitude, life and motivation for a quartet of main characters as well as finding opportunities to view how things change for a number of other individuals. This would normally be the sign of a series that is racing through its source material, but nothing feels rushed here - the growth and progression (or regression in some cases, arguably) of its characters always feels organic, measured and utterly fascinating. Anime of this kind tend to use their sport of choice as either an excuse for character drama or the sole raison d'etre for a series, but Ping Pong finds a perfect balance - at its heart it's absolutely a tale of sporting endeavour, what motivates a person to reach the highest heights of their sport and the sacrifices that come from that singular focus. At the same time its story is so much broader than that - this is a tale of friendship; of family; of growing up and finding happiness in ways that a person might never have imagined just months previously.

The result of all this is simply astounding - when it turns its eye to the action at the ping pong table, the show's seemingly messy animation style suddenly shows its chops to bring forth an incredibly fluid depiction of such a fast-paced sport that isn't afraid to lean in some rather surreal depictions to depict the emotional intensity of what is going on behind those with paddles in hand. Elsewhere, deft touches are shown in the handling of more poignant and emotional moments - an episode set at Christmas is a highlight here, beautifully casting a light on its main characters and what their particular decisions since the beginning of the series has wrought for them. In the midst of all this, Ping Pong also knows not to take itself too seriously - its imagined world where table tennis is the pinnacle of popular sporting endeavour is silly, and as such the show delights in playing with that silliness by having players mobbed by the world's press, discussed heavily on social media and engage in massive sponsorship deals, all of which is accompanied with a nod and a wink as part of its presentation.

Returning to those visuals for a moment, this is the one area where your enjoyment of Ping Pong may vary. Even in comparison to Yuasa's previous TV anime outing, The Tatami Galaxy, Ping Pong's aesthetic looks decidedly rough and ready at first glance, and occasionally even looks downright ugly - this is particularly true if you're looking at the still images above, which you'd be forgiven for taking as a sign of a poorly-produced show. However, this particular style arguably works - it's absolutely successful when it comes to any table tennis action on show, but it's also leveraged well elsewhere to surpass any initial concerns about its untidy appearance. For some, this distinctive aesthetic simply won't sit well with you, but you should definitely give it a chance and an opportunity to grow on you.

Less divisive will be the rest of Ping Pong's presentation - its soundtrack is utterly superb and fits the series perfectly, and the voice cast all do a good job of representing their characters in a way which is never overstated and again slots nicely into everything that the show is trying to achieve.

Ping Pong the Animation isn't going to be some kind of revelation that rocks the anime industry, but it is proof that directors with a very particular talent and vision can still find a place within the industry to practice their trade, which is to the benefit of everyone concerned. Its thanks to Yuasa's take on both Ping Pong's story and how it's presented that this series is more than just another sports anime - it's a pitch-perfect examination of growing up, sporting endeavour and plenty more besides. No matter your take on its animation style, you'll be hard-pressed to find a better character study in animated form this year.

Ping Pong the Animation is available to view on-demand for subscribers to ANIMAX UK.

9
Its visuals won't appeal to everyone but its story and handling of its characters are almost flawless, resulting in a compelling package that will live long in the memory.
LATEST REVIEWS