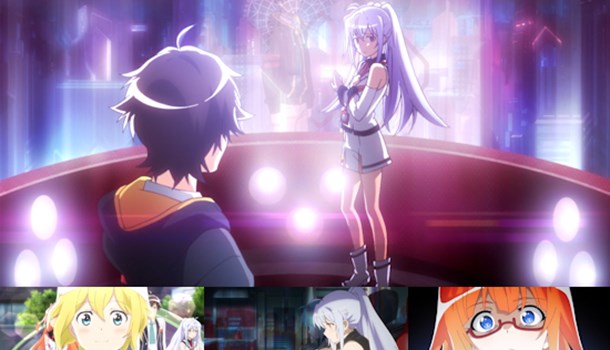 Imagine a future utopia where mankind has created androids indistinguishable in every way from humans, allowing them to live, work and play as they seamlessly integrate themselves into society. Imagine, however, that the lifespan of these androids is severely limited, at which point they need to be shut down and retrieved by their manufacturer for recycling or disposal.

Imagine the potential inherent within an original anime series based around this world and premise. Then imagine all of that potential thrown into the nearest dustbin and replaced by a predictable romantic comedy. Congratulations, you've just imagined Plastic Memories.

Tsukasa Mizugaki is a young man whose desperate attempts to land him a job have gotten him nowhere - so, out of options, he makes use of the old adage that it's not what you know, it's who you know, and leverages his parents connections to land him a job. His new role? A place as a member of SAI Corporation's "Terminal Service" department - the team tasked with retrieving androids that have reached the end of their allocated lifespan and squaring away the paperwork with their owners.

As you might expect given our opening paragraph, this isn't easy work - collecting an android that can think, feel and engage in relationships with others just like a human isn't simply a case of replacing your refrigerator or toaster, it's effectively sentencing a sentient being to death. Thus, Terminal Service are subject to abuse and doors slammed repeatedly in their face, if not the nightmare scenario of an android and their owner absconding entirely to try and escape this fate - something which simply cannot be countenanced by the corporation responsible, given the consequences when an android exceeds its lifespan.

If this doesn't already sound like an impossible task for the team's newcomer, Tsukasa finds himself paired with android Isla to aid in these retrievals - cold, distant and clumsy, Isla proves to be of little assistance in the duo's duties, although there's no faulting her effort in the field. There is, of course, more to Isla's behaviour than meets the eye, and helpful though Tsukasa's other colleagues are they seem reticent to tell him too much about his partner directly.

Let's start with the positives, namely Plastic Memories first episode, which is a terrific opening gambit for the series - it introduces the main characters and their quirks, and then wades straight into the overwhelming emotional minefield of collecting androids that might as well be human from doting owners who see not a machine, but a son or daughter; a sister or brother; a loved one. It's a perfectly positioned piece of human drama with a real impact, softened by a smattering of humour to ease you through some heart-rending moments as Tsukasa completes his first assignment.

At this point, we were entirely sold on the series - it was never going to be a Time of Eve TV series in terms of its impact or subject matter, but its opening instalment provided everything we could have hoped from it.

But then, unfathomably, the series shifted further and further away from its core questions about life and death, be it synthetic or human, and the hardships and necessity of carrying on in the face of loss and how to deal with its imminence. Instead, what we focus upon is Tsukasa and Isla and the odd relationship between them - in other words, what we have here is a romantic comedy as various individuals give tips or forcibly try to push the two together, creating the kind of comedy and misunderstands (usually for comic effect) that you'd expect of that genre.

In fairness this comedic turn is largely proficient (if predictable), but that is to ignore the fact that it's also hugely misguided - of all the fascinating things inherent to Plastic Memories, a hard to buy into romance between its lead pairing is perhaps the least interesting facet the show could have focused on. It brings some degree of payoff in its tear-jerking finale, admittedly, but nowhere near sufficiently so to justify the sheer amount of time wasted ignoring, mishandling or glossing over other more noteworthy story beats that promised the kind of content most viewers will have tuned into the series for.

Beyond its narrative content, Plastic Memories is an attractive looking series - colourful with strong character designs and a willingness to back up on-screen events with an appropriate visual treatment throughout. The show's soundtrack is also pleasant and fits that aesthetic well, so we can't fault the presentation of this package particularly.

But, and as you've probably gathered, in our eyes Plastic Memories is a massive disappointment - if you're looking for a romantic comedy series with a little bit of an emotional edge that only occasionally rears its head then this is a competent series. However, if its first episode led you - as it did us - to expect far more depth to its characters and story-telling given its initial promise, then boy are you in for a let-down. If you desire an intelligent show in the mould of the likes of Time of Eve, then steer well clear of this one.

You can currently watch Plastic Memories in streaming form on Crunchyroll and Viewster. The series will be released on home video by Anime Limited in 2016.

4
An exciting concept gives way to an ocean of wasted potential as what should have been thought-provoking subject matter is jettisoned in favour of romantic comedy.
LATEST REVIEWS