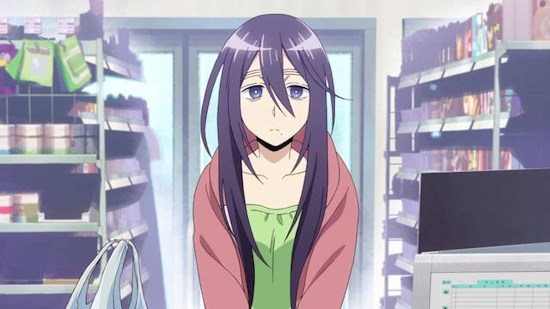 Recovery of an MMO Junkie

Recovery of an MMO Junkie is the tale of recent NEET, Morioka Moriko. Unsatisfied with her life at 30, she gives up her job to live alone and act out her fantasies in the online MMO world of Fruits De Mer, the only place she feels that she truly belongs. Her online friends give her support and camaraderie she just can't find in the real world, but as the show progresses she begins to realise that her online friends may not be so far away after all...

Ignoring the issues associated with the director, Kazuyoshi Yaginuma, (more details on ANN) I'll just look at the show on its merits. While I appreciate the controversy now surrounding the show, Yaginuma did not write the story or create the characters. It's an adaptation of the manga by Rin Kokuyō and essentially his input is strictly technical in my view, and no reason to condemn the show or the hard work put into it by others.

With that out of the way, Recovery is a very sweet show. Morioka's struggles with everyday life are probably familiar to many of us who reached 30 and found life no clearer than it was when we graduated. There's never a specific reason given for Morioka's decision to retire from the world aside from a general melancholy. This to me is an important touch because it saves the lead character from being a victim, and for a female-led series, I'd rather not see another damsel in distress. Ultimately her issues could affect any one of us, and that makes her appeal universal. Her awkward interactions with people at the local grocery, concerns over her own appearance and lack of direction are troubling without being dramatic, and at least shows a self-awareness that makes the character more relatable.

As Morioka spends more time in her Utopian online world, using a male avatar that encompasses everything she seems to desire in a man, she joins a guild and makes a special friend in Lily, a female avatar that is both kind and considerate. Her interactions with Lily remind her of an earlier time in her life where she played another MMO and made a similar connection, but the chances that they'd be the same person are a million to one...

Of course, the series wouldn't work if the two weren't connected, and over 10 episodes Morioka meets people in the real world who she might know better than she realises. Sakurai Yuta is a handsome young man who literally bumps into Morioka and takes care of her - as the two get to know each other and realise they have numerous acquaintances in common, romance begins to blossom, helped along the way by friends online and off.

It would be hard to call Recovery a comedy - it's light-hearted and enjoys playing with MMO tropes. And as unlikely as it is that you'd ever just bump into your best online friend in the real world, the likeability of the characters trumps the contrived conveniences that are rife throughout the series. Ultimately, you want the pair to get together so convenience is a necessary ally in getting to the endgame.

At just 10 episodes (plus an OVA special) the series is the perfect length - not so long as to draw the romance into tedium, and long enough to get a proper feel for the characters involved. The animation is of a good standard, and the music choices used throughout properly evoke an online RPG, just as they should. The opening theme is snappy and fun, striking a solid tone for the episodes to follow.

There wasn't much I disliked about the show, but nothing that had me cheering it from the rafters either. Recovery isn't quite as astonishing as I had been lead to believe, but it's a very pleasant watch with a strong lead and affable supporting characters. Moriko may not be quite the go-getter of say, Hataraki Man's Hiroko Matsukata, but she's real in a different way and I enjoyed watching the world from a woman's perspective.

You can currently watch Recovery of an MMO Junkie in streaming form on Crunchyroll.

8
A chaste romance which is sweet without being too sugary.