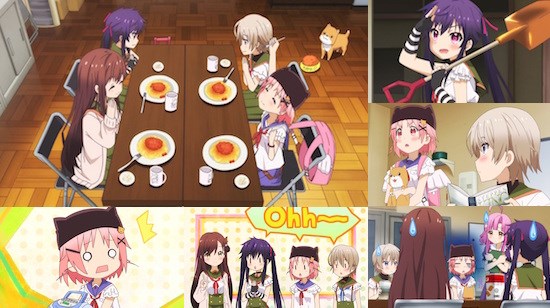 I really have no clue where to begin with this one, other than to say this series' title is a confusing one. For the uninitiated, the name of the series may conjure up images of Love Live, but that couldn’t be further from the truth. According to Wikipedia the literal translation of the Japanese title is “Living at School!”, which gives a little more of a clue about the series, though not much. Alas, that is about as far as I can get before I begin to really struggle in finding the right words to describe this series appropriately...

School-Live! is a good series, perhaps even a great series, and arguably one of the best of the last few years. Here at UK Anime Network we piled praise on it throughout our 2015 Awards deliberations, during which we awarded it “Best dramatic anime”. It was also a runner-up for “Best streaming anime”, beaten only by the exceptional (and still yet to be released on these shores) Shirobako, which also narrowly beat School-Live! for the title of “Best moment”.

You have probably already gotten the impression that we think School-Live! is a pretty good show and well worth your time. However, where things get difficult is in expressing exactly why that is the case. You see, something big happens towards the end of episode one which dramatically pulls back the curtain and presents you with an entirely different proposition to what you thought you had been watching up to that point. Very few are the series which can successfully pull the wool over your eyes and present a genuinely shocking reveal such as this; Puella Magi Madoka Magica springs immediately to mind as one such example. This makes it an extremely difficult series to review, because the series as a whole is very different to most of the first episode, therefore to talk in any detail about the rest of the series by necessity requires one to spoil the reveal at the end of episode one. This is a series which really shouldn’t be spoiled, so I’ll do my best not to.

The stars of the show are the four main cast members: First up there’s Yuki Takeya, who’s over-excitability and exuberance drive the group and helps keep their spirits high; Kurumi Ebisuzawa is the sporty one of the group; then there’s Yūri Wakasa (Ri-san), the ‘big sister’ and de facto leader of the group; and finally there’s the bookish Miki Naoki (Mi-kun). The main support for the group comes in the form of teacher Megumi Sakura (Megu-nē) who is constantly exasperated by the girls over-familiarity. All sounds fairly typical for a school-based anime series doesn’t it? Well, I can assure you it’s not. The depth of character and emotion on display once these seemingly one-dimensional and familiar anime stereotypes are faced with the... let’s say "events"... of the series are second to none. What we end up with is a group of lovable and endearing characters who you can’t help but root for right up until the very end.

School-Live! is a series which excels in the art of the reveal, and with sublime timing it teases you into each one, giving away just enough to make you suspect what may be to come, without giving so much away as to make it obvious is a tightrope which the series walks to perfection. The series contains enough twists and turns to keep you guessing, even when you are certain you have nailed where it’s headed next the reveal itself is never anything short of completely satisfying. Much of the series story is told, largely by necessity, through flashbacks. Normally excessive use of flashbacks is a black mark against a series, but here it is played perfectly and really adds to the excellent overall storytelling of the series.

If we were to make any complaints about the series it’s that the animation and character designs are functional, rather than exceptional. Similarly nothing particularly stands out from the soundtrack, outside of the annoyingly catchy opening. While we’re on the subject of complaints: The main point of drama in the series (once revealed) is a massive cliché in this day and age, however it is handled with such deftness and originality that we can’t complain too much. Our final gripe is one regarding the release itself: Alas, it’s another of those so called “Collector’s” Editions where that claim is dubious at best. The on-disc extras are virtually none existent, while the physical extras consist of a “Plastic O-card and Rigid Collector's Box.”. Please, please, stop calling things a “Collector’s Edition” unless you are going to provide something worthy of the title; this is nothing of the sort. A standard release in a “rigid” box does not a Collector’s Edition make, and consider yourselves marked down for trying to pass one off as such!

Phew, I think I made it without any spoilers. To summarise then, don’t be put off by what this series appears to be at face value, it is not what it seems and that is both it’s greatest strength and biggest weakness. Hopefully we have persuaded you to leap over the initial hurdle of “it’s just another cutesy school anime” and that it’s worth sitting down and giving School Live! a chance, even if you only check out the first episode on Chrunchyroll. Though, when the “Collector’s Edition” will set you back £49.99 and offers nothing to earn that title, you may be better off just watching the whole thing there (and remember to add back the marks we deducted from the score for this "Collector's" release if you do).

7
We can’t tell you precisely how good it is without spoiling it, so just watch it.
LATEST REVIEWS