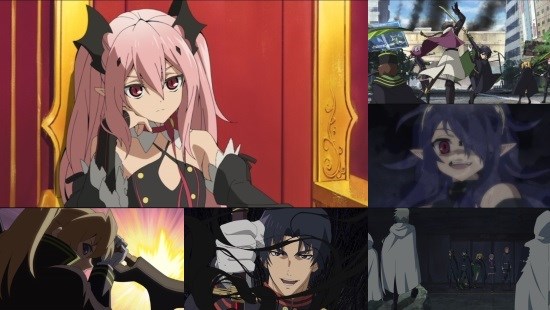 As Universal's first foray into releasing anime in the UK they have chosen to release Seraph of the End as a Collector's Edition with a host of physical extras. The physical extras in question comprise of art prints, character bio cards, a poster and an art book. For its price and for what you get, it is a very good set of extras. The art book is 130 pages and consists of key visuals, background art, end cards used in the show and interviews with several members of the production. These give some rather interesting insight into the show and its production. For any fan of the show or for those who like to learn about how anime is made there is a lot here that will provide some fascinating reading.

Onto the show itself; Seraph of the End takes place in a post-apocalyptic world where vampires are now the dominant species and humanity's numbers have dwindled to the point of near extinction. The story begins by showing the series' protagonist Yuichiro Hyakuya and a group he thinks of family attempt to escape from the clutches of vampires. During this attempt, Yuichiro is the only survivor that manages to escape. Upon leaving the vampire's rule behind he encounters one of the few sets of humans who are living in the outside world free from the vampires oppression. From here the story skips four years into the future, showing Yuichiro as a teenager as he attempts to join the vampire extermination squad in order seek vengeance against those who killed his family.

Presented in this set are the first twelve episodes of the show. Within these episodes, Seraph of the End follows a rather rudimentary formula for shows of this ilk by doing some world building, setting up character motivations and establishing the major conflicts of the series that are yet to come. The world building is cleverly handled within the first episode by showing a child's perspective of what it is like to live under vampire rule. This also ingrains motivations in the Yuichiro since the aftermath of his escape attempt are the driving force for his actions within the show. For the most part the handling of Yuichiro's character can be seen as a little one-dimensional since he mostly talks about gaining power and killing all the vampires, which in all honesty makes him very comparable to other similar protagonists in popular series who talk mainly about getting revenge.

This treatment allows the cast to open up and talk more - a pivotal progression as one of the key components the characters need to learn during their training is how to get along with each other and act like a team. As you'd expect, things don't start off very smoothly with character's clashing personalities getting in the way of working together due to how independent each character is. What Seraph of the End does well here is show subtle changes and improvements, with characters working together by stalking more and asking for other's opinions before blindly going off on their own. This in turn leads the way to how action scenes are handled.

Within the series, characters fight with demon-infused weaponry in team battles. Each squad consist of a five member party, each with their own distinct weapon and personality. This makes some of the fight scenes in question rather crowded affairs with over half a dozen characters on screen at a time. While things are decidedly busy, the series does a good job of demonstrating the action, and fights are well co-ordinated with enough distinct action to keep the viewer's attention.

While Seraph of the End has some fun action moments and really interesting world building elements, it somehow feels like something is missing - like these episodes are mainly building up and setting things in motion for the second half of the series. In that sense, Seraph of the End follows a set blueprint similar to those found in other supernatural action shows, showing just enough of the enemy vampires to keep your interest and leaves a few details out to keep up a sense of mystique. Likwise, it shows enough action and explains just enough for the viewer to grasp the concept of fighting with demon weapons but still feels like it's withholding information. While the series is enjoyable and fun to watch, it feels as if we're being teased about something bigger in later episodes.

Overall though, this is a good start to the series and a great start for Universal's venture into anime distribution, with a great set of extras in this Collector's Edition that provide fans of the show with a lot value for money. If you're a fan of Seraph of the End already, this set is well worth investing in.

7
A decent supernatural action series, presented in a package that has some bite to it.