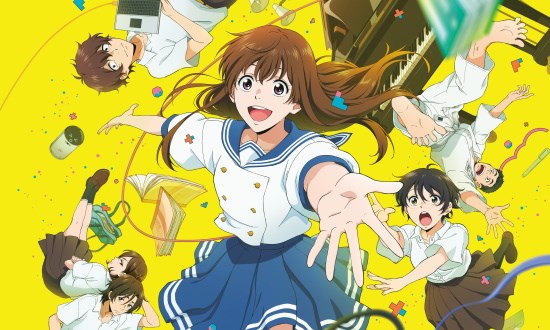 Music always plays an important role in any film but a full-on anime musical is a pretty rare thing, particularly when it comes to a full Western release because it’s so difficult to dub. Languages don’t all fit together the same way after all - you either have to change your English language track into Japanese every time a song starts ((a'la Macross II) or manage the difficult task of finding a way to translate the songs whilst still fitting the right cadence. Finding a cast that can sing as well as act is a tricky proposition! Funimation (who were also on the production committee) have decided to bet on Sing A Bit Of Harmony however, and have gone all-in on the translation route. Time to see if it’s paid off!

Set in a Japanese town which has become something of a model village for testing out new technology, the film follows a young girl named Satomi, who is something of an outcast amongst her fellows. As a result she tends to keep to herself and is therefore rather surprised when new transfer student Shion latches onto her from the moment they set eyes on each other, as he loudly asks if Satomi is happy before promptly bursting into song. Making matters even more complicated is the fact that Shion quickly reveals herself to be not just an AI, but the AI that Satomi’s mother has bet her career on! Satomi and the small group of students who also stumble onto the secret must therefore try to conceal Shion’s nature whilst trying to cope with her increasingly crazy antics, all made in the pursuit of making Satomi happy.

You have to give credit to writer/director Yasuhiro Yoshiura who has yet again repeated the trick he pulled off in Time of Eve – i.e. taking something terrifying and somehow managing to make it a light-hearted drama involving school kids. Let’s face it – once Shion’s AI was revealed to have the ability to talk to other machines, tell them what to do and has her shut-down system removed, I was waiting for Sarah Connor to turn up in the third act to stop Judgement Day! But nope, not only does this not happen, even the films adults seem to fail to comprehend the potential of what they're dealing with and are far too busy sniping at each other over promotions to notice.

What remains is something that's pretty easy-going and, if we’re honest, feels a little like it was originally supposed to be a mini-series like Time of Eve, because there are probably one or two storylines that really feel a bit superfluous and needlessly get in the way. For example, the film doesn’t really need either of the two romance plot lines it has running through it. As well as padding out the runtime they rather dilute the main thrust of the film that needs to focus on Satomi and Shion. Combined with the film tipping it’s hat as to the big twist waaaaay too early (unless that was just us) this unfortunately means that the big emotional climax, that should by rights have had us bawling, doesn’t quite pull off the big finish in the way that films like I Want To Eat Your Pancreas did.

Where the film really excels is in it’s visual design and world-building. The whole thing just works really cohesively and achieves that day-after-tomorrow effect that so many productions strive for. You can absolutely see the Computer that runs Satomi’s house being the next step up of Alexa for example. And the idea that robots that go wrong can be easily shut down using a phone app is a clever and logical way for things to go. This means that even the more whimsical concepts like farm robots wearing traditional hats or giant spinning wind turbines are just that much easier to accept. JC Staff have knocked the visuals out of the park too which makes it even better!

The core for a musical though is of course the songs, and in the English dub things are a bit more hit and miss. The cast and crew have made a valiant effort here and some of the songs are great fun, but many of them are also a little awkward because of the way that the lyrics have been twisted to fit in with music designed for the Japanese language. The issues are compounded by the lyrics feeling a little too on the nose (though this could well be an issue that is the same for a Japanese speaker listening to the original). There are also one or two moments where the singing is deliberately bad for story reasons and… you kinda wish they hadn’t gone all-in on that because it's painful! Elsewhere though it must be said that the dub cast is largely fantastic, with Megan Shipman and Risa Mei really going all-out to give life to Shion and Satomi respectively.

Overall the film is a very good experience, and when its theatrical release begins you should definitely check out this rare sci-fi musical (we can’t really remember what the last one was unless you count the horrific genetic mutations of the Cats movie….). It may not quite hit all the notes it’s aiming for but the melody is fun and you’ll be humming it on the way home!

8
Spectacularly good world-building makes up for any flaws here