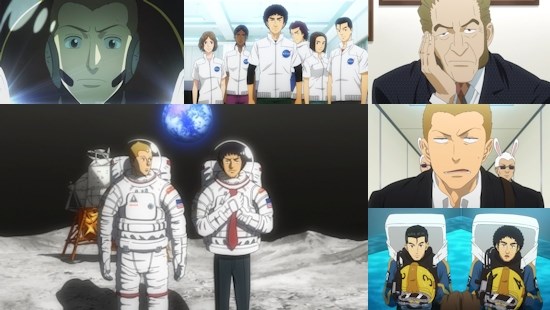 It's been a long time since we last discussed Space Brothers - a few months shy of two years in fact, after the first few episodes had aired - but as this rather unique series closes in on its hundredth episode it seems like the New Year is a good opportunity to revisit and re-evaluate this long running series as it seemingly continues to enjoy a fair amount of success.

As you might expect, the core narrative of the series has remained the same throughout, as elder brother Mutta Nanba tries to catch up to his astronaut brother Hibito in the hope that one day they might both journey to the Moon together. I don't think it's too much of a spoiler to say that Mutta makes substantial progress in achieving this goal over the course of the series thus far, meaning that much of our time is spent viewing the nature of that progress from qualifying to be an astronaut through to the early steps of his training at NASA with a view towards finally achieving his goal.

If you've ever been interested in space and its exploration, then this alone gives you a very good reason to watch the series - although set in an imagined future which allows it to take liberties in places (not least the fact that we're talking about manned missions to the Moon in the first place!), there's clearly a vein of research and basis upon current examination and training methods that gives some interesting insight into the world of a wannabe astronaut. This is not a series with a desire to "skip to the good bit" either, ensuring that every aspect of this training and preparation is given significant weight. Although this can mean that aspects of the show can drag and feel a little slow (especially if a story arc is revolving around an issue or concept that doesn't catch your eye), there's a real talent for drawing natural human drama out of each part of the series thus far, bringing a little tension or some thought-provoking ideas to what would normally be otherwise mundane areas of the story.

This ability isn't isolated to just the show's titular brothers however - it also extends to the wider cast of the series with surprisingly effective results. From the effect of real-life medical conditions through to family issues all the way to the simple desire of some of Mutta's friends-cum-rivals to succeed. Many of these plot points work well in their own right, as well as impacting - significantly in some places - on the immediate lives of Mutta and Hibito themselves. Given that anime loves to kill off characters to unnamed fictional diseases, it's oddly striking to see Space Brothers leveraging actual real-world illnesses as part of its structure.

Even though the series has a pretty consistent ability to inspire and entertain, there are of course still stand-out moments to be picked out, and the peak of the show thus far involves Hibito, as he becomes the first Japanese person to set foot on the moon in a mission which almost goes dangerously wrong. This leads into a story arc that is incredibly powerful in its dramatic tension to create some unbearably nerve-wracking episodes that wonderfully portrays the loneliness of being thousands of miles from your home planet when disaster strikes. Even the aftermath of this scenario is dealt with superbly, with long-reaching consequences that cast a shadow over aspects of the series even now.

Thankfully it isn't all deep, dark and depressing stuff - Space Brothers also has an eye for comedy, which it delivers in a measured fashion to lighten the mood or simply get a laugh, often via some slightly surreal or ridiculous moments that nonetheless still sit comfortably within the wider series.

Even when it comes to the show's animation quality, Space Brothers gets a pass - it isn't jaw-dropping but its remains consistent and accomplished throughout regardless of what it needs to try its hand at, with direction and scene composition that actively accentuate the impact of its most critical moments. This is a series that knows when to inject a prolonged silence or a long, lingering shot at just the right moment to wordlessly leverage the power of a given event or moment without overstaying its welcome.

At this point, the only real negative that we can leverage against the series at its length - after almost ninety episodes it shows no signs of abating, making for a major time commitment for anyone looking to start watching the series from scratch at this point. There are a trio of recap episodes in the midst of the series (episodes fifty-two through to fifty-four, for reference), but these can't really capture the majesty of the show's best moments. Thankfully, the series is largely devoid of anything that could be called filler, although as we've mentioned if a particular story arc doesn't tickle your fancy there's a chance it could hang around for a while, even if we've personally been impressed with the mostly sensible pacing of events.

If you aren't put off by its length however, Space Brothers is a truly enjoyable series that is as impressive as it is unique. If you've ever found yourself bemoaning the fascination that anime has with high school students and younger characters over an older cast getting on in the adult word, then this is perhaps the series to remind you that this isn't always the case. Indeed, its proof positive that you can create a compelling series using effectively an all-adult cast, and evidence that's well worth taking a closer look at if its subject matter catches your eye.

9
A fascinating, unique concept backed up by proficient and largely well-paced story-telling, and packed with organic emotion and drama.
LATEST REVIEWS