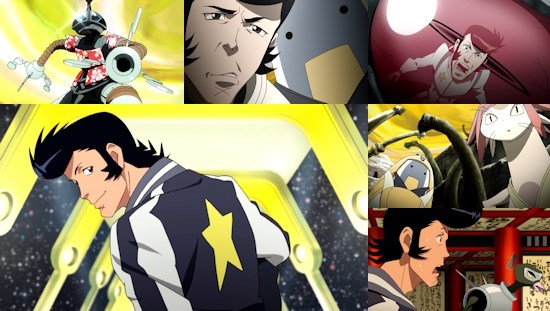 Attach the name "Shinichiro Watanabe" to a new series, and you'll witness a shiver of excited anticipation from many an anime fan. Add the explanation "he's the guy who directed Cowboy Bebop" to that name, and a whole new raft of faces will turn their eyes towards you in the hope of more of the same. It's this kind of thrall in which Watanabe's name is held that has powered much of the hype surrounding his latest project, Space Dandy - such is the expectation surrounding the series that it's even being dubbed into English for its simulcast (as well as a US television broadcast) in the hope that this might be "the next Cowboy Bebop". An unfair label to brand the series with, as it turns out.

In terms of its setting, Space Dandy couldn't be much simpler - Dandy is space-faring alien hunter, in a universe where the rewards for finding unusual and never before seen species of creature can be substantial. The trouble is, finding suitable aliens is a big ask in such a busy, bustling universe, and this isn't exactly helped by the fact that Dandy is... well, less than competent, let's say. Despite his fancy title, Dandy is really little more than a drifter, more interesting in visiting an outlet of "breastaurant" chain Boobies or chasing women than aliens.

Still, Dandy has to pay the bills somehow, (Boobies don't come cheap, obviously) and with his loyal but outdated robot companion he tries his best to make ends meet. As the series begins, his crew is bolstered by a third member - a creature who is keen to point out that he isn't a cat, nor is he a rare species of alien (an easy mistake to make when you have a sticker on your face), even if Dandy refuses to believe him on either count. Once it's clear that Meow (as he becomes named) really isn't a rare alien, Dandy is all set to be shot of this chatty little critter, but his claims that he knows just where to find some suitable weird and wonderful aliens is just what Dandy wants to hear.

It doesn't take a genius to work out the setup of the series from here - Dandy gallivants around, always on the lookout for a quick buck, an alien to capture or a branch of Boobies to visit, and invariably almost everything that he tries his hand at goes horribly wrong. There's also a villain of some description on the scene who, for some reason, wants to capture Dandy, but from these early episodes we're given little clue as to why anyone would want to spend their time or resources capturing an incompetent Earthling.

If one thing is made clear from the outset of Space Dandy it's that this isn't a show to be taken seriously - the end of the first episode in particular is a major clue along these lines, and the show's occasionally self-referential bent also serves as a reminder that you should just go with the flow and not worry too much about the finer points of the plot. In reality, Space Dandy just wants to make you chuckle - something that it has varying degrees of success in doing. It's only when we reach the third episode of the series that the show seems to start distilling and focusing on what it does best, finally weaving its plot and simple but effective comedy together in an entertaining way after a couple of initial instalments that perhaps tried too hard to impress to the point where it's comedy too often felt forced. In fairness, all three episodes have enjoyable moments (such as the use of "space Twitter" as part of an obvious but well-crafted gag in episode two), but until episode three they're too few and far between to really function sufficiently as a comedy alone.

One area where Space Dandy succeeds unequivocally is visually - from its catchy opening theme onwards, the show is a riot of colour and movement that keeps your eyes glued to the screen throughout. Space Dandy's universe is one that is full of imaginative and eye-catching designs that riff on typical sci-fi concepts in a fun and fresh way - the closest analogue here would be Redline, to the point where you could genuinely believe that the two works share the same universe, and that comparison is certainly no bad thing at all. Even when the comedy is waning a little, we found ourselves thirsting for more episodes simply to revel in the glorious animation on show here, and when it gets its act together and the laughs start coming too, the series threatens to be unassailable.

Given its unique simulcasting arrangement, we'd be remiss not to mention the show's English dub - in fact, we'd be remiss not to mention it for another reason, that being that it's also downright fantastic. If our reviews often devolve into us pointing out where the English voice cast don't manage to match the performances of their Japanese counterparts, that certainly isn't the case here as all of the main trio of characters manage to capture the quirks, intonation and behaviour of the characters perfectly. It's almost uncanny how close the Japanese and English language versions are in depicting these primary characters, so whatever your choice of language option you'll be well served here.

It's taken a couple of episodes to warm up, but overall we're left feeling positive about Space Dandy as a whole - as we alluded to in our introduction, any expectations that the series will be anything akin to Cowboy Bebop are grossly unfair and to be honest no series could meet the hype that has surrounded Space Dandy since its announcement, but now that the show's cast is beginning to gel and its writing is finding its feet the series looks set to be a whole lot of fun. Provided it can find some further angles to explore so as to avoid becoming repetitive, perhaps by making further use of its villain, then this could be just the kind of pure, undemanding entertainment you want to guide you through the cold, wet early months of 2014. We probably won't be talking about Space Dandy fifteen years later as we are Shinichiro Watanabe's most famous work, but in this era of simulcasts perhaps that isn't important.

You can watch Space Dandy in streaming form on Wakanim.  Anime Limited will be releasing the series in physical form later this year.

English and Japanese audio with English subtitles.  Free SD and HD advertising-supported streaming or download via Adobe AIR; premium streams cost 0.79p per episode or download to own at £1.58 per episode.

7
It's had a slow start, but Space Dandy is worth watching for its glorious visuals alone, and now that its comedy is beginning to gel it promises to provide an entertaining ride to go along with them.
LATEST REVIEWS