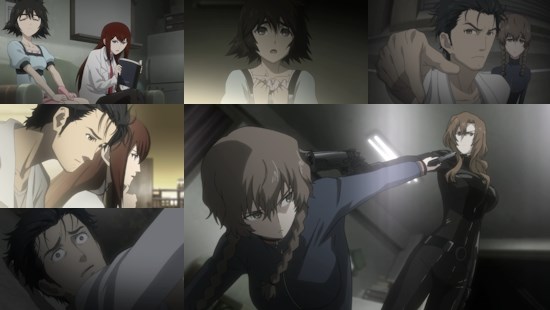 The climax to the first half of Steins;Gate must surely count as one of the most shocking - and successful - ever seen in anime. After all of that careful yet entertaining build-up of its characters, suddenly the fun world of science and self-delusion that had been so well crafted was sent crashing down around the ears of its cast, and in particular our protagonist Okabe.

Luckily, when you have a time machine of sorts to hand, there's no such thing as an irreversible disaster... or is there? Okabe's first "time leap" proves to be a successful one, with even his memories left intact thanks to his so-called "Reading Steiner" ability, leaving him in a perfect position to work-around the disastrous consequences of the Future Gadget Labs time travel developments. He quickly discovers, however, that not every event can be altered quite so easily...

All of this sets us up for the mainstay of the show's second half, which sees Okabe effectively trying to unpick all of the events of the first to reach the desired timeline which will save his friends and perhaps even the world. This actually proves to be an exceedingly smart and satisfying setup - rather than each character having a single distinct arc they all-but have two within the confines of the series, one to introduce their character and the second to delve into their back story by digging into the motivations for the D-Mail they sent earlier. Unsurprisingly, this makes for some heart-rending decisions and moments for Okabe (and the viewer) to face, and there are even worse realisations to come over the horizon.

With all of its twists, turns and revelations, the second half of Steins;Gate is simply scorching viewing - each episode packs a substantial punch, and the arguably slow pacing of some of the show's first half is all but brushed aside in favour of a hectic race against the clock for Okabe where every decision has life-shattering (or world-shattering, even) consequences. Perhaps the smartest thing the series does is providing this sense of a world whose future hangs in the balance depending on one man's decisions without losing sight of the intimately personal relationships between the members of this cast - this is a story far more involved with the idea of helping your friends than it is saving the world, and the sense that what is really important to Okabe is the people right in front of him gives events an emotional power and draw that can't be understated.

Given the growing complexities in its setting filled with multiple timelines and chains of events, you'd almost expect to find that the finale to the series is a mess, but far from it - it's intelligently written, plotted and carried out from beginning to end, ensuring that its climax is as fitting and satisfying as everything that has come before. This second half of Steins;Gate is difficult to discuss in critical terms without engaging in myriad spoilers, but if you enjoyed the build-up of the show's cast and premise in its first half this second bundle of episodes will simply blow you away.

Visually, this isn't the best-looking series you'll ever see on Blu-Ray, but I suspect that the deliberate aesthetic of the show is more to blame than a poor Blu-Ray transfer in this case - the general look and feel of the show is perfectly in place with its outlook and setting, but the noticeable gradients in shadows and shades sometimes undermined what is otherwise a pretty well-animated offering. Any such minor quibbles aside, both Blu-Ray and DVD versions of the series look as good as you could hope for, and this release also includes the show's enjoyable OVA bonus episode which offers up one final chance to hang out with the characters in a satisfying American jaunt.

If you're looking to watch this series with its English dub in place, its cast certainly do a pretty good job of matching their Japanese counterparts in projecting the raw emotion inherent in its developments - in particular, J. Michael Tatum is almost perfect in his performance as Okabe to bring all of the right elements to this key role. Outside of Tatum's part the rest of the cast don't fit their roles quite as well but still do an admirable job even if our ultimate preference is for the Japanese language track, which comes completely with an error-free subtitle track for maximum enjoyment.

Having absolutely gushed over the second half of Steins;Gate when it first streamed to the UK via Anime on Demand, my feelings for the series have only diminished a miniscule amount in the intervening time thanks to this second viewing. This is a show that arguably benefits from the breathing space between episodes afforded a television and streaming broadcast to allow its events to fully sink in (even if that can be a painful process), so watching it en masse skews the pacing very slightly and loses a little of the impact of its big cliff-hangers courtesy of being able to move straight on to the next episode.

This is, however, a small footnote against the broader view of Steins;Gate - that being its place as a superbly written and produced series that leverages its cast incredibly well to create a tale that is both personal and world-altering, using time travel as a conceit in a way that puts the likes of Doctor Who to shame. You'll be hard-pressed to find a better anime release in the UK this year, and I'd wager you certainly won't find anything that can move or grip you like Steins;Gate can. Even in the wider sense of post-2000 anime as a whole, here is a series that can legitimately stake a claim as being one of the 21st century's best so far.

9
An incredible character-driven rollercoaster that will grip you from start to finish - Steins;Gate is a genuine contender for the best UK anime release of 2013.
LATEST REVIEWS