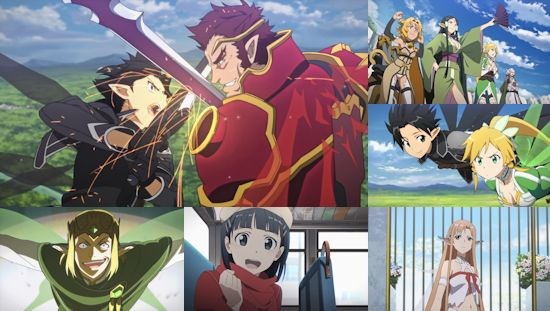 The end of Sword Art Online's third, penultimate volume brought Kirito a significant distraction from his goal of finding and rescuing Asuna from the wherever she may be within the virtual world of ALfheim Online - thanks largely to his previous experiences in Sword Art Online, he remains determined to leave nobody to their own devices where they might come to harm, even in this world where death isn't a persistent state.

As a result, our protagonist forcefully inserts himself into the midst of some political machinations that are about to turn violent, granting us an action-packed start to the show's final volume as Kirito single-handedly thwarts an attempt at what effectively amounts to a land-grab by the Salamander group within the game.

With this crushed - and also providing another example of Kirito's in-game power - thoughts can return to more personal matters and the rescue of Asuna, although not before Kazuto learns some surprising (and frankly awkward) truths about his companion within ALfheim Online, Leafa. This is but a minor distraction in the grand scheme of things however, as we finally reach our climactic showdown between Asuna's "jailer" and the game's self-proclaimed king, Oberon - aka Sugou - and our leading man.

Rather than being an unequivocally good series, the second half of Sword Art Online in particular is more a question of whether its positives outweigh the negatives on a personal level. It's easy to see why the show is so divisive amongst fans - its incestuous overtones with the introduction of Kazuto's (non-blood related, as if that makes it okay) sister are a troublesome constant in these later episodes, although thankfully they ultimately play out in a way which nearly excuses their inclusion in the first place, while Asuna's role in this second half is basically that of a piece of meat to be used as a plaything by all and sundry. Both of these points seem simply to be the product of lazy writing - there are doubtless more elegant ways of setting up a similar scenario to that which this Fairy Dance arc wishes to play out, but instead the show's writing shoots for the simple lowest common denominator to leave us with a story that works in its broad strokes but fails to impress when put under any kind of substantial scrutiny.

Taking this final volume, and its second half more specifically, at face value however reveals a show that is broadly entertaining - these final episodes in particular provide some fantastic action, ALfheim's virtual world is fascinating in its structure despite being a retooling of Aincrad, and the series as a whole is a fun, adventurous romp that mixes video game trappings with more traditional fantasy in a pleasing manner. It's pure wish fulfilment fantasy, as Kirito strolls through his virtual and real lives with every male character wishing they were him and every female throwing themselves at its feet, but taken in small doses across these volumes that doesn't stop it from being both fun and even surprisingly gripping on occasion.

As per previous volumes of the series, there are once again no chapter markers on any of the episodes within this final instalment of Sword Art Online - in more positive news, we can now judge how quickly our Blu-Ray player can fast forward through ninety seconds of video with our eyes closed. That aside, the show's English dub remains pretty solid if not particularly memorable throughout, and video and audio quality are both excellent. The only extras here are again some web trailers (which play back at the correct pitch and speed, don't worry!) and textless opening and ending credits to round off this series of bare bones releases.

If its first half held a broad appeal for the most part, Sword Art Online's Fairy Dance arc is a tougher proposition to discuss - a few of its narrative decisions are quite simply a turn off for some, which is a shame because beyond them is an enjoyable story that could have achieved comparable results without these moments of laziness. If you can push past those ill-advised choices then the second half of Sword Art Online doesn't match the first, but remains entertaining and well-animated throughout, to leave us with a series that is well worth checking out if its core premise appeals and you feel that you can cope with its missteps.

7
Aspects of its narrative are outright lazy, but overall this is a strong finale to Sword Art Online that doesn't match its first half, but is decidedly entertaining regardless.
LATEST REVIEWS