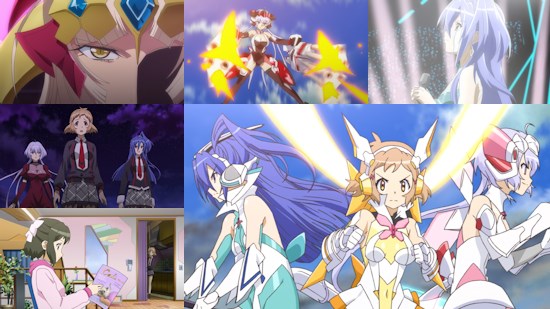 Seeing music performed live can, in extreme cases, be a life-changing experience, but in the case of Hibiki Tachibana "life-changing" barely begins to sum up her experiences... Having turned up to watch the two-girl idol duo named ZweiWing perform, Hibiki finds herself caught up in the midst of a terrifying attack by the "Noise", an alien race seemingly hell-bent upon literally turning humanity to dust. The cause of their sudden attack on the stadium where this concert is taking place is unknown to Hibiki, as is the fact that the duo she's watching are in fact also the front line of Earth's resistance against the noise thanks to the powers they both hold to activate ancient relics known as Symphogear which give them the ability to fight.

Thanks to another's sacrifice, Hibiki somehow - almost improbably - survives this attack, but this isn't the end of the Noise's assault on the populace and it isn't too long until she finds herself caught up in further peril as she tries to save a young girl from the Noise. It's this tight spot which leads Hibiki to a shocking revelation - somehow, she too now holds the power to summon Symphogear with nothing more than a song she instinctively knows how to sing.

Thus, the cheerful but unlucky (or "cursed", as she sees it) Tachibana finds herself at the forefront of the fight against the Noise as one of the few "attuned" people capable of wielding the only relics which can destroy their foes, much to the irritation of her new partner in the form of ZweiWing member Tsubasa, a veteran in the field who has no time or desire for babysitting.

This isn't the only problem facing Hibiki either - juggling school and a personal life with the constant need to run off and fight the Noise at a moment's notice plays havoc with her relationship with best friend and roommate Miku, which offers an unwanted distraction at a time when the stakes are rising higher and higher when it comes to battling the Noise.

If all of that sounds a little "by the numbers" for a series of this nature - normal girl gets special powers, finds herself needing to fight an alien menace to protect her friends whilst jeopardising that friendship in the process - then you'd be absolutely right; on the surface, there's nothing particularly interesting about Symphogear's story. This isn't exactly helped by the animation quality of the series either, which largely wobbles between bad and downright terrible over the course of the series.

Yet somehow, almost impossibly, Symphogear works - its engaging and entertaining in spite of its glaring flaws which should have you turning off within a couple of episodes. This is admittedly helped in some part by the opener to the series, which gleefully brings about a bloodbath that seems willing to kill all and sundry to grab your attention from the off. Rather than continue down this path however, the show never really returns to those edgy beginnings and instead sticks rigidly to its formula, delivering all of its drama and narrative with an utterly straight bat that treats even its most nonsensical elements in an entirely serious fashion. The commander survives and explosion right next to him? It's fine, he just deflected the blast using martial arts. This is the most glaring example of how Symphogear handles everything - it straightens its proverbial tie, clears its throat and calmly explains its rationale for why something is happening. That what it's doing is utterly ludicrous even within the confines of its silly world seems lost on the series, and that's exactly what makes it so fun.

This is echoed in the show's dedication to buying fully into every aspect of its premise - we've already mentioned how Symphogear is activated by song, but this isn't just denoted by a transformation sequence and some background music. No, the characters involved in the battle actually sing while they're fighting - if they get hit, it'll break the flow of their singing, and as they leap around their intonation changes to match. It's a simple directorial decision that makes a huge difference to the weight and feel of the show's action, and if one thing sold me on the premise of the series it's this one. It probably helps that the soundtrack to the series is actually pretty good - yes, nothing can match its opening theme of Synchrogazer, but there are some decent tracks throughout; a good job too, given how often they get recycled for action scenes.

If you can either buy into - or at least revel in - Symphogear and everything it attempts then there's quite a lot to like here. Yes, its animation is ropey at best but it can still pull off some of its action scenes in an energetic manner, the show's voice cast (led by Aoi Yuuki, who you'll recognise as the voice of Madoka herself in Puella Magi Madoka Magica) work hard to sell the story to the viewer and even the narrative's clunkiest musings on friendship and the like have a certain old-school charm to them. It's largely silly, and you suspect deep down that the series knows it, but it never lets any chinks open in its armour as it insists upon the serious nature of what it's communicating at all times, which further lends to that feeling that they don't make them like this anymore.

If you want something vacuous and silly but entertaining and oddly engaging, then you could do a lot worse than Symphogear - not everyone will appreciate its tone and direction, and understandably so, but if you're still enjoying the show after a couple of episodes you'll most likely lap up the rest of what it has to offer.

You can currently watch Symphogear in streaming form on Crunchyroll.

7
A silly story that follows an over-used template seen in countless other anime, but its dedication to following through on that story somehow makes this series well worth your time.
LATEST REVIEWS