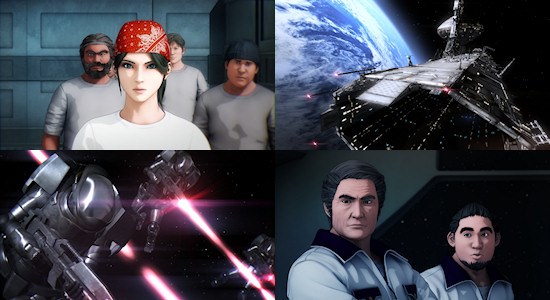 Back in my heady days at university, I mainly survived on two things - beer and second-hand sci-fi paperbacks. The beer kept the body working (kind of) and the sci-fi kept the mind working whenever I was not being devoured alive by coursework. As a result I was quite excited to take a look at TO. Spaceships and sci-fi in glorious 1080P? Sign me up!
TO is made up of two 40 minute episodes each taken from the 1980's manga series "2001 Nights", a loosely connected set of short stories that drew much of its inspiration from hard sci-fi novels of decades past. Each is its own self-contained story and there is no real link between the two - the first story, "Elliptical Orbit", deals with a terrorist attack on an orbital spacestation and the second, "Symbiotic Planet", deals with a political spat on a far off colony world complete with a small Romeo and Juliet sub-plot spanning the two sides involved.
The art in TO is entirely 3D CG - something which is mildly arresting at first glance (mostly due to the sudden flashbacks to Final Fantasy: The Spirits Within that I experienced), but which becomes very comfortable after a minute or so. The CG in TO manages to avoid two massive pitfalls that typically mar this art style: first, it manages to neatly sidestep the uncanny valley by using a very defined matte art style that simultaneously manages to avoid the second problem, that of actors always looking slick or slimy particularly in brightly lit environments. Its clear that a lot of time and effort went into making sure that the art was approachable and free of the issues that typically drive away viewers. In the main, the characters and environments look passably believeable on first glance and while sometimes muted, they move and react well with a full range of expression. Sadly though, while a lot of effort went into the art it is clear that there was not much love present in the rest of the production.
Outside of the characters and some environmental elements which received the lions share of the work, the majority of the show looks painfully bland and at times even ugly. For many parts of the setting there is very little detail both in the models used and the textures applied, which creates a stark contrast with the well constructed characters. A lot of these problems can be traced back to the design of the various parts of the show - with the exception of the handful of spaceship exterior designs the majority of the design work put into TO is oppressively generic and uninspired. In particular, when soldiers in powered armour suits show up in one of the episodes I had to stifle a laugh as the suits looked like a thrown together mess of angular obsidian chunks.
The lack of love invested in the show is most evident in the world building and character development, and almost complete lack thereof. Character interactions are frequently confusing - even at the end of the first tale I was utterly flummoxed as to how the two principal characters were related to one another and what, if any, development had occurred. Were they father and daughter? Estranged lovers separated by near-lightspeed travel and the resulting time dilation? Just good friends? I honestly could not tell you as the show was very poor at letting you get to know the characters. The show barely makes an effort to provide setting for the stories it tries to tell, mostly relegating such things to introductory narrator voice-overs or a handful of expository comments that get clunkily dropped into character speech. The most damning thing of all is that the world itself feels utterly sterile - there is no decoration, no nicknacs, no posters on the walls or magazines on the tables. Everything is unblemished by the touch of day to day life and living. It feels cold, uninviting, boring.
To drag this point out even more, the lack of love and care extents to the plots presented in TO. The lack of world building does not help here as a lot of events that occur feel disconnected from reality, or simply unexplained. In both stories, the threats presented to the cast are of such a preposterous, moustache twirling unnecessary degree of evil that they feel like a joke. The lack of explanation provided makes the show often feel like you are listening to a young child tell a tall tale: "So then the box exploded, and then this happened, and then this happened, and then the villain got squished, and then-" and so on. This is particularly bad in the second story, Symbiotic Planet, where the last third of the story devolves into a series of contrived nonsense that robs the show of any semblance of gravity or tension and left me wanting to jump into the TV and throttle the main cast for their offences.
In order to try and end on a lighter note, I did enjoy the soundtrack presented in TO. The show is presented in 5.1 HD audio which managed to sound great even on my rather cheap stereo setup. The background music in particular was very well chosen and performed, and I felt always helped compliment the action on screen. The voice acting is also well performed, both in the original Japanese and in the localised dub.
To repeat myself a bit however, TO feels like the result of a lot of effort and time, but not much love or genuine investment. The audio and visuals are certainly very nice but sadly what they convey feels lifeless and at times bewildering.

5.1 HD English and Japanese audio, two director interviews, each with a different group of the original staff.

4
Nice CG and a good musical score, severely let down by soulless and at times infuriating storytelling.
LATEST REVIEWS