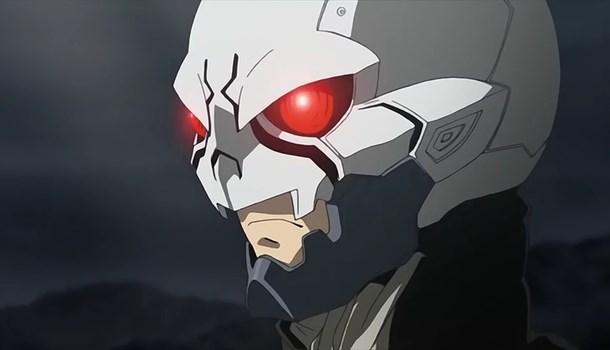 Based on a manga by Shotaro Ishinomori, whose works even one as generically ignorant as I have heard of, and the anime being adapted by the renowned Studio Bones, well, let’s face it you’re likely to expect good things from The Skull Man.

Failed reporter, Hayato, returns to Otomo City to discern the identity of a masked vigilante. Aided by the young wannabe photographer, Kiriko, who Hayato helps smuggle into the city, he finds more danger and more secrets and vendettas than even he could have imagined.

The Skull Man is set in an alternative, sometimes futuristic Japan where a war has split the country into two nations. Though Hayato is returning home from Tokyo, he is nevertheless an alien, distrusted by the authorities. Finding himself stuck in the middle of the history of the powerful Otomo pharmaceutical company, the police, a questionable religious organisation: the White Bell Society, the shadowy Otomo concern, not to mention the eponymous The Skull Man and... so much more.

So much more really describes The Skull Man. Or, perhaps, too much more. The Skull Man pitches itself somewhere between horror and a detective mystery and the number of characters and organisations that they represent (or may represent) can at times be almost overwhelming. Considering it’s a 13-episode series The Skull Man often runs the risk of just throwing too much into too little space and leaving you with the feeling of head-spinning mystery. The early episodes, that introduce most of the main characters, arguably takes us down some rabbit holes that really means the story treads water. Yes, it does some necessary setting up of introducing the The Skull Man and his accomplices, but more than anything it stops us getting into the meaty heart of the story.  There is so much going on: there is Hayato and Kiriko’s story; a potentially unfulfilled romance between Hayato’s friend Father Kanzaki, who runs the local orphanage and Maya, the daughter of Hayato’s dead father’s friend and employer, and Otomo City bigwig Gozo Kuroshio and... this doesn’t even get us into all the shape-changing human beings, and The Skull Man itself, nor the sinister machinations of The White Bell Society nor Hayato and Kiriko's individual character arcs... you begin to see the point, that the story just layers complexities one atop the other and as the series progresses continues to add more characters, scenarios and power struggles and mysteries and... and... and... The Skull Man just doesn’t know when to take a breather.

The fact that it is part horror, with various humans turning into rampaging anthropomorphic creatures and causing bloody violence, and part mystery means the series never quite manages to nail down its identity: who is the The Skull Man? What about Otomo pharma’s absorption of Kagura Pharmaceuticals after a terrible accident that killed the owner and his son... or not? I’m all for smashing genres together, but The Skull Man just never seems to have a sure enough hand to guide it. Instead, it veers between genres rather than allowing them to meld into a single, seamless entity. This is something that is often reflected in the tone of the series, as it seems unsure how to pitch itself. Does it want to be dark, menacing horror? Knockabout comedy? Or an emotional drama? It’s all of these things at different times, but again they don’t seem to mesh well, especially the humour tropes – the obligatory male protagonist sees the female starkers just seems there because they think the audience want or expect it. 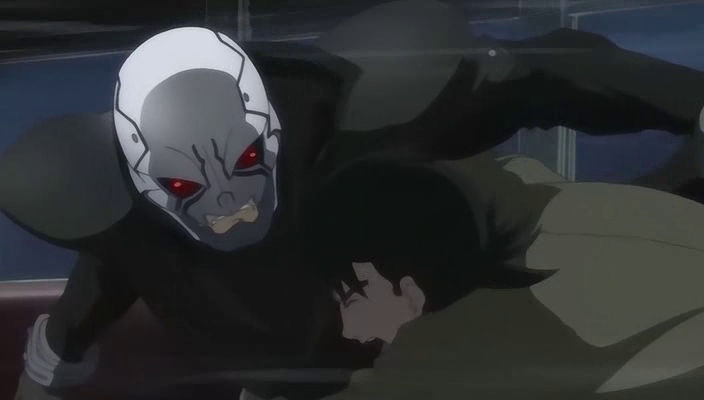 Hayato tackles The Skull Man... braver (or stupider) than I

The characters perhaps define the qualities and deficiencies of the series. Hayato and Kiriko are fairly engaging characters and their dynamic, with Kiriko initially trailing along after Hayato because he’s useful, then their gradual affection is nicely handled but ultimately it feels like a lift and shift from so many other love-hate stories without anything to really give it originality. Still, the fact that the series is willing to follow both of their emotional and story arcs means at least with all the abundance of story twists and characters that are introduced, we are at least grounded in two protagonists we can invest in.

There are also some nicely nuanced dynamics with the unrequited Father Kanzaki/Maya romance, which is then further complicated by her religious affiliations. There's an amusing yet mysterious continuing cameo from an old-style detective who seems curiously omniscient, but beyond that many of the remaining characters and even their designs seem right out of the cookie cutter. True, The Skull Man harks back to 2007, so it’s an older cookie cutter, but nevertheless they are often just too obvious, lack subtlety or can feel out of place.

The action sequences (when they come) still stand up reasonably well, though sometimes the background animation clearly has that "save money and keep it simple" aesthetic. I’m OK with that and it's worth it to ensure that the money is spent on the animation that matters, so the action sequences are properly visceral and never get out of hand (err, though at the end I’d disagree with the lasers, where do all the lasers come from? I mean are we suddenly in the future?). Also, some of the designs are nicely inventive, especially some of the more villainous entities towards the end that have a malicious playfulness about them.

Ultimately the series is all a bit of a disappointment. The bad always seems to outweigh the good, and the lack of focus really shows, making the resultant series feel like too much of a mess. I do wonder if it is because Bones were hoping to get more out of The Skull Man than just 13-episodes. When the series finished, the thing that struck me hardest was that it was all just an attempt to create an origin story.  Since origin stories need to hit a predetermined point at the end, this results in a muddle here. So much of the narrative in this series is just backstory explicated, where it should have been a footnote, a throwaway reference in a wider, deeper world and story. But it’s not until the end that you realise why many of the decisions in story design were taken, and when you realise that Bones were likely after an origin story it makes sense.

Sadly, that does not forgive the resultant series, which could have been so much more had it concentrated on character and whittled down the narrative. Everything but the kitchen sink is thrown at the show, and the result is a mess. With a kitchen sink on top.