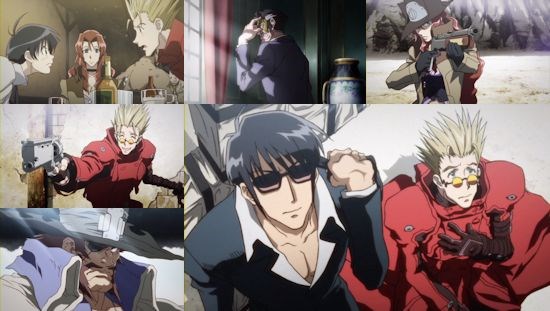 Although its animated TV outing never had quite the same impact upon Japanese anime fandom as it did in the west, this still wasn't enough to dissuade Madhouse from revisiting the world of "Humanoid Typhoon" Vash the Stampede for a 2010 theatrical outing - an outing which, after a few theatrical screenings across the UK in recent years, has finally made its way to DVD and Blu-Ray here in the UK.

The film drops us straight into the heat of its otherworldly Wild West setting, with a professional robber known as Gasback in the midst of a destructive but seemingly lucrative job.  When things turn sour and his team of accomplices mutiny against Gasback, things threaten to spill over from bloodshed into death - enter Vash the Stampede to put a stop to things in his usually comedic but cunning fashion.

Fast forward twenty years into the future, and we find Vash and Gasback once again on a converging path, with the latter still looking to seek revenge against his former comrades who deserted him while the former is hoping to prevent a bloodbath that Gasback's trail of vengeance looks likely to precipitate.  More specifically, attention focuses on a town run by one of Gasback's former henchmen, Kepler - a man who has used his ill-gotten gains of the past to create a glorious legacy for its people, signified dually by a state of the art power plant and a rather gaudy statue of Kepler himself.

With a huge bounty on Gasback's head and an obvious stage set for his appearance, the town becomes a hunting ground for all sorts of bounty hunters, including the androphobic Amelia who finds herself the subject of plenty of unwanted attention, not least from the goofy Vash himself.  But can the Humanoid Typhoon really prevent any bloodshed in the midst of such a tinderbox?

The resulting film born from this whole scenario is, in short, a distillation of everything that was great about the Trigun TV series, but given an all-important layer of visual polish compared to that now extremely dated-looking show.  The entire film is punctuated throughout by well-realised set pieces, some of which are played for laughs and others in the name of great action (while some blend the two expertly), to the point where it's a great film to watch as a group with popcorn and/or beer to hand - exactly how the film's production team envisaged it being viewed incidentally.

Even though much of the film is fun and frivolous, there's still a significant emotional underbelly that shows itself in its final act to deliver some deeper and more thought-provoking fare that really strikes at the heart of Vash the Stampede as a character - is it always the right choice to save a life, when that life might go on to hurt so many others?  These sobering moments still fit in well with the overall narrative without dampening its broader sense of fun, and also serve towards delivering a fitting (if slightly slow) climax to the movie that makes for an ultimately satisfying finale.

As I've already mentioned, Badlands Rumble is a massive step up in visual quality over the original Trigun TV series, and it's a joy to see its main cast reunited in what is generally a good-looking film on either its crystal-clear DVD transfer (reviewed here) or its High Definition Blu-Ray release, to make it worth the price of admission alone for existing Trigun fans.  Both Japanese and English language tracks are similarly excellent, with the film sporting one of the better English dubs I've seen of late.

The second disc of the movie's two-disc DVD release also contains a number of great extras, including Japanese cast and staff interviews, a making of feature with plenty of fascinating footage of the Japanese cast in the recording booth, and footage of various Japanese premiere events.  Kudos has to go to Kaze here for providing such a compelling package of extras (which also includes a small yet cool booklet and poster) - it's been a while since I've actually found myself wanting to sit down and make some time to watch extras on an anime release!

Existing Trigun fans probably won't need to have their excitement ramped up for the return of Vash the Stampede, and thankfully Badlands Rumble has proved itself to be far more than a simple cash-in on the franchise to prove itself as a love letter to the best aspects of the original series.  As we've already mentioned, it's the perfect movie to sit down to with like-minded friends over a beer or five, and beyond its well-paced and timed moments of action or comedy the film has a thoughtful heart of gold to steer it through its final act.  Provided you're at least somewhat familiar with the concept of Trigun, even newcomers will find a lot to love here - Badlands Rumble is a hugely fun movie, pure and simple, and sometimes that's all you can ask from an evening's entertainment.

English, German and Japanese 2.0/5.1 audio with English and German subtitles.  Extras for this release consist of Japanese cast and crew interviews, a "making of" feature and footage from a number of Japanese premiere events.

8
A great slice of fun entertainment that will captivate existing Trigun fans, but also has plenty to offer newcomers to its world.
LATEST REVIEWS