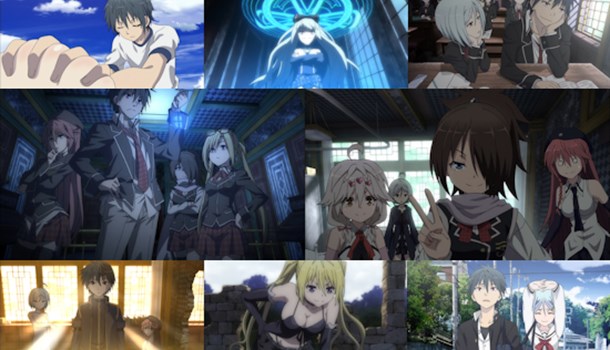 Arata Kasuga awakens for another normal day - threatening to oversleep were it not for his doting childhood friend and cousin Hijiri, and preparing for another day of school. Except something isn't quite right in this world, leaving traces of a small worry that something is amiss. While every aspect of Arata's life is normal enough... the sun is black. Hijiri claims this has always been the case, but that doesn't mesh with Arata's knowledge at all, and this revelation is about to make his day decided more stressful.

As it turns out, Arata is currently residing in an alternative world - one crafted in the wake of a massive gravitational quake three years previously that destroyed the one which he knew and loved. Indeed, even the Hijiri of this world isn't what she seems, and before he knows it Arata is faced with an impossible choice - to destroy this fake world, or himself be destroyed. Faced with these options, Arata chooses.... to join a magic high school!

Thus, our protagonist becomes the newest member of Royal Biblia Academy, where he seeks to become a mage and tame the Demon Lord level powers that reside within him. To do this, he's going to have to prove himself to the seven "bosses" of the academy - the Trinity Seven of the show's title, and seven highly powerful female mages who are the cream of the school's crop.

At least, that's the plan, but in reality Arata's job seems to be stumbling around finding himself in as many situations where he can be perverted as humanly possible, walking in on girls changing, falling on them and indulging in all of the other hobbies that come as par for the course when you're a harem protagonist. Yes, that's right, Trinity Seven is absolutely a harem anime first and foremost, and it has little interest in hiding that part of its picture as it becomes the centrepiece of literally everything that the series does, and equally almost everything that its characters say.

In a sense this is a shame, because for all of its magical high school trappings there is something interesting about Trinity Seven's world and story that it never really gets to properly explore because its mind keeps wandering elsewhere like a horny teenager trying to do his English homework. The requirements of the show's harem element also removes much of the sense of threat or impending doom from the show - even the enemies in any given scenario within the series are still ostensibly friends of the wider cast, leaving magical battles often feeling more like a little friendly back and forth rather than something upon which lives and futures may rely.

Then again, this lack of any real threat does benefit the harem hijinks on show here - the camaraderie between the cast and the way they all willing lean in to the antics and interests of Arata keeps things friendly and steers the show away from ever feeling exploitative. This makes for one of the most pleasant harem shows I've seen in a while - it's all good, clean (well, sort of) fun, that feels more like Carry On In The Magic High School than anything more insidious.

One area where Trinity Seven truly stands out is with its visuals - character designs are attractive and sharp, and animated with sufficient care and attention to ensure that they rarely go off model. Admittedly, the trade-off here is that the show's action component is pretty limited, taking place in small rooms and with very short bursts of actual action, but it's a trade-off worth making in this specific case I'd say. Beyond this, the show's backgrounds and settings are absolutely gorgeous, particularly within the opulent confines of the academy, to provide a location that is eye-catching but rarely steals the scene entirely.

The viewing experience is further accentuated by a superb soundtrack from Technoboys Pulcraft Green-Fund, whose brand of electronica powers the series through everything its doing from the frivolous to the fantastic with ease, while also providing a number of terrific ending credit songs. The show's Japanese cast also put in a great shift selling their characters, more so than the decidedly flat English dub which sounds far less enthused about the whole thing. Still, technically this disc is sound in every respect regardless of your viewing preferences.

Trinity Seven is an odd proposition when taken as a whole - it's the most generic harem series you could imagine, and its story is largely pushed to one side in a less than satisfying way in deference to those harem shenanigans. Yet, in spite of all this, Trinity Seven is surprisingly fun to watch - visually its beauty (particularly on Blu-ray) really can't be underplayed, and at least part of that fun came from soaking in its environment and well-realised character designs. Even beyond this however, there's a simple pleasure to be had from watching its cast interact, and although they don't do anything unique or notable there's a real charm to the way they do it that kept me coming back for more when I would normally have hit the stop button and vowed to come back and finish my review another day.

In other words, Trinity Seven won't win any prizes for originality, but if all you're in the mood for is a simple, dyed in the wool harem anime experience, Trinity Seven is as accomplished as they come.

7
It's far from original, but its visual appeal and strong soundtrack makes this a simple but surprisingly effective harem anime.
LATEST REVIEWS