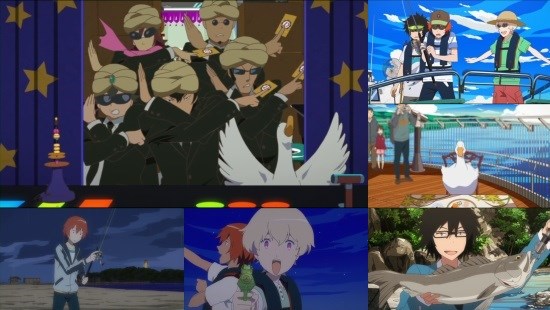 Yuki Sanada is your typical fish out of water; always moving from place to place and transferring to a different school. Even though he is used to transferring he has trouble introducing himself and making friends, and it doesn't help that his social awkwardness has him freeze up completely and make a scary looking face that gives people the wrong impression. Things change when a water pistol-wielding alien boy name Haru turns up at Yuki's new home and suddenly decides that the two will now be best friends who fish together. The problem is that Yuki has never fished a day in his life, which prompts the pair to seek out the guidance and friendship of Natsuki, a classmate and the so-called “Fishing Prince.” Whilst endeavouring to improve their fishing skills, the trio come to the attention of a government organisation known as “DUCK”; specifically an agent from DUCK named Akira who so happens to be constantly accompanied by an actual duck named Tapioca. While the group improve their fishing skills several odd occurrences are happening in the quiet town of Enoshima, mainly revolving around people losing their memory and performing an odd dance when they come in contact with the ocean.

Taking a very laid-back and relaxed approach, Tsuritama swims along at a rather leisurely pace in order to convey a rather carefree attitude with regards to it's story. At first the plot revolves mainly around the self-improvement of the characters. While the main focus of this is the characters improving their fishing skills, it can also be said that the characters improve their social skills. What Tsuritama does well in this regard is in showing the gradual development of each of the character's personalities in different ways. Yuki, over the course of the series, develops a rather keen interest in fishing and in order to improve he needs to find the courage to ask for help with regards to learning the intricacies of the hobby in question; Haru, being an alien, does not understand human behaviour and confides in Yuki's grandmother for advice with regards to interact with people and be a good friend to Yuki; Natsuki develops through his teaching of fishing and also has family issues of his own to deal with.

For the most part the series deals with the group fishing by learning certain methods and techniques, and then putting them into practice in order to catch fish. The character interactions are fuelled by a very bright and colourful looking world help keep the viewers attention, annd interspersed into the mix is the rather eccentric aspects of the show, namely the involvement of the DUCK organisation and Haru's alien behaviour. Akira, the agent observing them, is helped by a duck for no discernible reason other than the organisation he works for shares the animal's namesake, and as the series progresses Akira begins to report more of the group's activities to his organisation, which also deals with Haru and his alien behaviour.

The alien aspect of the story is the main thrust of the plot and ultimate objective for the group, and although its only ever stated a few times early on the full weight of the situation doesn't become clear until the end. While things do take a more serious tone with actual plot development, everything is still handled in the same carefree and colourful manner the rest of the series has shown up to that pointk with character interactions and fishing being the main point of focus despite dealing with a huge crisis. While the characters may not be all that interesting on their own, within a group dynamic they manage to play off of one another well and provide quite a fun viewing experience.

However, while things are fun and colourful, much of the enjoyment of the show really depends on how well you like the characters. As the main plot is thin on the ground at the beginning and mainly revolves around Yuki's efforts to learn how to fish, it can become a tedious investment if you don't really care for the given situation the characters find themselves in. As the series progresses and there is a crisis though, seeing how the characters overcome the given situation is rather fun, which may be the best thing you can say about Tsuritama - it's fun but that's about it. There's no deeper meaning to had, the characters aren't that memorable and the series overall feels much like a hobby someone dips into as a fun way to pass the time.

One thing to note about Tsuritama is that it has possibly one of Sentai Filmworks' best dubs. All the characters are well acted with voices that suit them perfectly, the script flows really well and conversations between the characters sound natural. The only slight problem is that a few characters pronounce “Enoshima” with a hard "e" and others with a soft "e", making it seem like some of the characters are calling the place “Eenoshima” - that's a small price to pay for what can be said to be a very competent dub that is rather enjoyable.

Tsuritama is much like fishing; a fun way to pass the time that's both relaxing and exciting in various doses. However, once things are over and the line is cleared you're left with only an odd sense of loss. This is a show that will linger somewhere in the deepest reaches of your mind, only to surface when you reminisce about that show about fishing that also had a duck in it.

7
Fun, relaxing and exciting - much like fishing. A series that is enjoyable whilst it has its hooks in you.