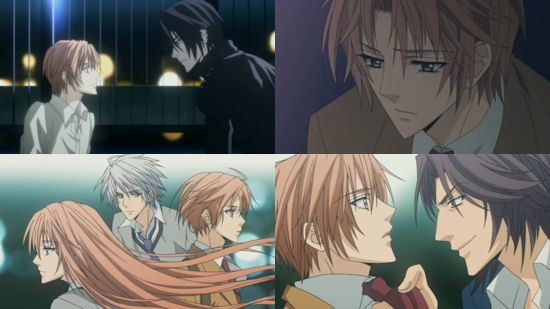 I think it's fair to say that Yuki Sakurai, the protagonist of Uragiri wa Boku no Namae o Shitteiru (to give it its full title; Betrayal Knows My Name is the English translation if you prefer), has had a tough life - Abandoned by his mother at an orphanage after his birth, Yuki now suffers from odd dreams and even odder sensations when he touches another person, where he holds the ability to see and feel their emotions and even look back into their past somewhat.  In a jolly, happy place that wouldn't be such a bad thing, but in the world of UraBoku it seems that happiness is one thing that is very much in short supply.

While a combination of these special powers and Yuki's own lack of self-belief triggered by his abandonment as child leave him isolated and lonely beyond the confines of the orphanage where he still lives, he isn't quite as alone as he thinks as his unique abilities come to the attention of some other equally interesting individuals.  While some of these entities seem only interested in doing him harm, others are out to protect him as his powers begin to flow out of control, with a man known as Zess catching Yuki's eye in particular as one of the people who haunts his dreams.

With his future life already in doubt, leaving him torn between the orphanage and a life elsewhere, things become all the more complicated as the true nature of Yuki's powers are laid before him against a backdrop in which friends and enemies become blurred, and the future of the world hangs in the balance.  Add in a mysterious bunch that refer to themselves as the Giou clan, and you have all of the ingredients for this particular shoujo anime.

Yes, that's right, I did say "shoujo" anime, and UraBoku is indeed a series primarily targeted at girls with a bit of a thing for Boys Love.  That said, from these opening episodes of the show I wouldn't let that put you off too much - Yes, there is obvious sexual tension between Yuki and Zess amongst other things, but it's not really any more profound or explicit at this juncture than the likes of CLAMP's X for example, and more importantly it doesn't get in the way of progressing the plot.

In fact, the 1999 X anime comparisons come thick and fast with this series - While the story holds some echoes of that particular outing, even the character designs have a CLAMP-esque feel to them and the generally downbeat tone of the show also holds a mirror up to the aforementioned series.  This is no bad thing, with JC Staff doing a pretty good job on production and animation duties, keeping the story flowing at just the right pace to allow the characters time to develop without getting bogged down in trivialities.  Although the series so far is almost relentlessly dark and depressing (it appears as though everyone in the show has suffered some kind of emotional or physical abuse, leaving them mentally scarred), it never makes too big a meal of the woe and turmoil it surrounds itself with, which gives UraBoku a feeling of balance and (dare we say for a series of this ilk) realism which certainly makes it more interesting to watch.

While the female-focused side of the series might push male viewers away as the series progresses, these opening episodes prove to be an equally enjoyable watch regardless of gender - If you enjoyed X then UraBoku certainly has the potential to hold your attention, and even if you haven't viewed that particular series this outing might well be worth your time if you can live with the homoerotic sexual tension that surfaces on occasion.

At the time of writing, UraBoku can be viewed in streaming format from Crunchyroll - The first five episodes are currently available to be viewed on the site, with a new episode released every Sunday.

7
A polished, well-paced and reasonably interesting start to this series makes it worth of consideration regardless of gender.
LATEST REVIEWS