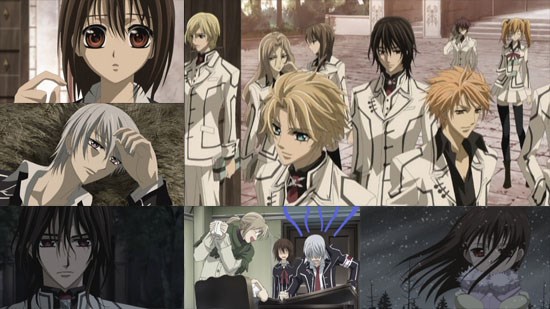 With the likes of Twilight and True Blood, vampires are the “in” thing at the moment. The demons and monster vampires of old have been replaced by pretty boys that the girls swoon over and the guys want to be. So, it didn’t take long for an anime based on a similar concept to come along - enter Vampire Knight, and a school that features both humans and vampires together. But is it worth biting into or does it suck?

Yuki Cross is a member of the Cross Academy’s school guardians, assigned to separate and guard the vampires of the Night Class from the humans of the Day Class. Leading the Night Class is Kaname Kuran, who rescued Yuki from a rogue vampire ten years ago. Yuki, along with fellow guardian Zero, must constantly patrol the academy during the night while trying to go school during the day - Although keeping the vampire’s thirst in check proves to be trickier than first thought.

Vampire Knight sits wonderfully in the pretty boy category, with the character designs we come to expect from the shōjo genre. Everything from long, flowing hair to eyes so big on the female characters that you’d swear that you're about to be sucked into them. In saying that, everything about the world from the characters down to the school is drawn and animated in a lovely fashion and is quite a sight to behold.

Story-wise, it does seem to take a couple of episodes for the series to kick itself into gear. While the opening two episodes go a long way to set the scene and characters, it does feel at times like it's taking too long to do all this setting up. However, by the third episode the overall purpose of the series actually ends up kicking in with a healthy dose of action and drama. While there are some very comical aspects to the story, replicating the manga origins of the series, this is mainly a drama series and it shows. It can get a little annoying that most characters seem to focus on being the broody, emo types that this genre is renowned for, but thankfully they don’t ruin the overall story.

Vampire Knight is very much a girl’s anime and doesn’t take any great pains to hide it. Guys shouldn’t avoid it altogether though, as while the vampire thing is the "in" thing at the moment it may hit some notes with both its action sequences and some of the drama. It is very much a case of try before you buy though.

One other thing to mention is that unlike Manga’s recent offerings, Vampire Knight is being released in volumes, with the first containing the first four episodes. The first series is only 12 episodes long, so three volumes won’t exactly break the bank, but after the recent years of bumper packs of series releases, no doubt there will be some complaints from the fan base.

As mentioned, Vampire Knight is a girl’s anime much like Ouran High School Host Club, though obviously with a much more serious tone to everything. If you are in to all things vampire, then this will be right up your street. However, even if you don’t like all that blood sucking, you should give this series a try - you might be pleasantly surprised.

While the usual Japanese and English audio tracks are included, there are no other extras; not even trailers or clean opening and closing videos.

7
It is one for the girls, but this vampire anime does anything but suck.
LATEST REVIEWS